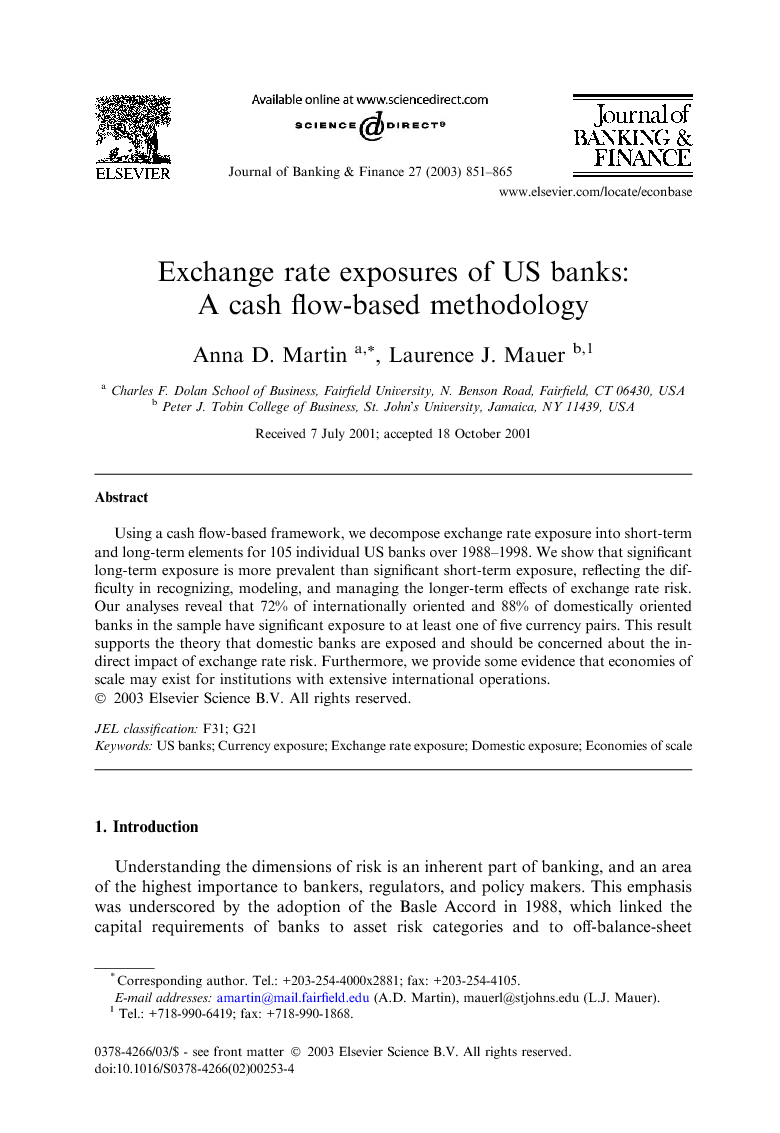 Using a cash flow-based framework, we decompose exchange rate into short-term and long-term elements for 105 individual US banks over 1988–1998. We show that significant long-term exposure is more prevalent than significant short-term exposure, reflecting the difficulty in recognizing, modeling, and managing the longer-term effects of exchange rate risk. Our analyses reveal that 72% of internationally oriented and 88% of domestically oriented banks in the sample have significant exposure to at least one of five currency pairs. This result supports the theory that domestic banks are exposed and should be concerned about the indirect impact of exchange rate risk. Furthermore, we provide some evidence that economies of scale may exist for institutions with extensive international operations.

Understanding the dimensions of risk is an inherent part of banking, and an area of the highest importance to bankers, regulators, and policy makers. This emphasis was underscored by the adoption of the Basle Accord in 1988, which linked the capital requirements of banks to asset risk categories and to off-balance-sheet obligations. The 1997 Market Risk Amendment to the Accord allows banks to use internally developed risk management systems; banks tailor such systems to their specific business structure and strategies. Risk management systems are now in place in most large US banks (e.g., Hendricks and Hirtle, 1997; Crouhy et al., 2000). Complementing these developments over the past 10 years has been an academic literature in finance, which has sought to identify the sources of risk for banks. Among the risk sources examined, exchange rate risk is one of the most prominent. Most authors have assessed the impact of foreign exchange risk on bank stock returns using multifactor models (e.g., Choi et al., 1992; Wetmore and Brick, 1994; Chamberlain et al., 1997; Choi and Elyasiani, 1997; Elyasiani and Mansur, 1999). The approaches in these studies broaden the CAPM-based market model by including an exchange rate factor to examine whether returns are sensitive to the exchange rate risk dimension. In contrast to previous work, we follow a methodology that focuses on the cash flow impact of the exchange rate risk of US banks. This methodology identifies banks that have exposures to exchange rates against the US dollar and allows for an assessment of the existence and relative importance of short-term and long-term exposures. Understanding the nature of the exposure of cash flows is important since hedging strategies and risk management models are likely to differ for each bank, depending on specific bank exposures. We find that this methodology is useful in understanding bank exchange rate exposures. The cash flow concept we use in this paper is operating income before depreciation and exchange rate gains and losses. Operating income is an indicator of bank credit standing or “soundness”. This in turn has bank management implications across such issue areas as liquidity and funds sourcing, as indicated by the CAMELS system currently used by bank examiners. Within this framework, we find that long-term exposure is more prevalent than short-term exposure among the US banks in the study, reflecting the difficulty in identifying and managing the longer-term effects of exchange rate risk. The pervasiveness of longer-term currency exposures may indicate the need to increase the focus on modeling these exposures within risk management systems. Based on the potential direct and indirect effects of exchange rate risk on cash flows (e.g., Chamberlain et al., 1997), we argue that not only international but also domestic banks may be significantly exposed. Our analyses reveal that 72% of the internationally oriented banks in the sample have significant exposure to at least one of five major currency pairs, while 88% of domestically oriented banks have significant exposure to at least one of the currencies. These rather high proportions suggest that even domestic banks should adapt their risk management systems to better understand the cash flow consequences of their indirect currency exposures. Previous studies have examined the exchange rate exposure of money center, super-regional and regional banks (e.g., Wetmore and Brick, 1994; Choi and Elyasiani, 1997), but none have explicitly categorized banks according to the extent of international banking activities. To investigate the possibility of economies of scale in exposure management, we classify the banks according to the extent of international banking activities and according to asset size. The classification based on the extent of international banking activities appears to be useful. We find that the frequency of exposure for internationally oriented banks in the sample is significantly less than the frequency of exposure for the domestically oriented banks for some currency pairs. This result is consistent with the belief that economies of scale or scope occur in foreign exchange exposure management. Institutions with the greatest extent of international activity are likely to be more aware of the potential for such exposures and are likely to have greater experience in foreign exchange risk management. The organization of the remainder of this paper is as follows: In Section 2, we discuss the effects of exchange rate risk with emphasis on possible sources of direct and indirect effects, short-term and long-term effects, and economies of scale in managing the exposures. Based on these perspectives, we develop our testable hypotheses. Subsequently, we describe the sample, data, and methodology used in this study. We then present the empirical results and conclude the paper with a summary.