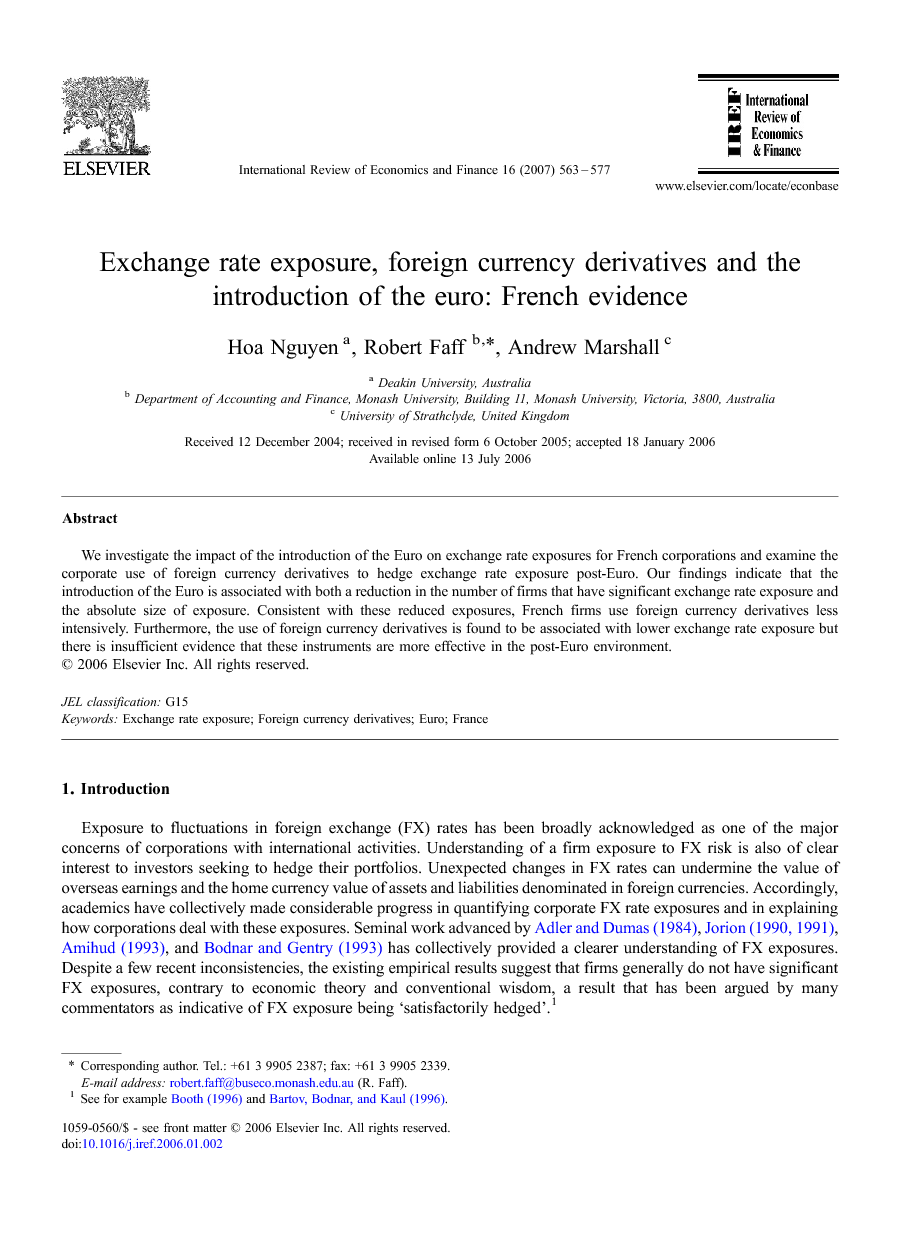 Exposure to fluctuations in foreign exchange (FX) rates has been broadly acknowledged as one of the major concerns of corporations with international activities. Understanding of a firm exposure to FX risk is also of clear interest to investors seeking to hedge their portfolios. Unexpected changes in FX rates can undermine the value of overseas earnings and the home currency value of assets and liabilities denominated in foreign currencies. Accordingly, academics have collectively made considerable progress in quantifying corporate FX rate exposures and in explaining how corporations deal with these exposures. Seminal work advanced by Adler and Dumas (1984), Jorion, 1990 and Jorion, 1991, Amihud (1993), and Bodnar and Gentry (1993) has collectively provided a clearer understanding of FX exposures. Despite a few recent inconsistencies, the existing empirical results suggest that firms generally do not have significant FX exposures, contrary to economic theory and conventional wisdom, a result that has been argued by many commentators as indicative of FX exposure being ‘satisfactorily hedged’.1 Given the contemporary empirical framework, in this paper we revisit the FX exposure domain by taking advantage of a key historical event in international finance — the introduction of the euro, which was finalized on January 1, 1999. This not only heralded the birth of a new major currency in the international capital markets but was also expected to bring significant benefits to the firms in participating countries as it dramatically altered the level of exposure to FX risk for firms within the European Monetary Union (EMU). At the aggregate level, the Bank of International Settlement (BIS) reports that the introduction of the euro has significantly reduced the turnover of OTC foreign currency derivatives (FCD) (BIS, 2002). The savings resulting from the reduction in corporate costs of managing intra-Europe FX risk is estimated to be in the region of 0.33% to 1.5% of the aggregate GDP of EMU countries (Hollein, 1999 and Wildman, 1997). Using a cross-sectional sample of French corporations pre-Euro (1996) and post-Euro (2000), we aim to: (a) examine the impact of the introduction of the Euro on French firms' FX exposure; (b) document the changing pattern, if any, of French corporate use of FCD to hedge FX exposure post-Euro; and (c) provide an empirical comparison of the role of FCD in alleviating FX exposure and test the major determinants of FX exposures in pre- and post-Euro periods. Our findings strongly support the contention that the introduction of the Euro has reduced FX rate risk for European firms. In particular, our results show that, after the introduction of the Euro, there has been a reduction in both the number of French firms that have significant FX exposures and the absolute FX exposure coefficients. In response to this reduction in FX exposures, we find that although the proportion of firms that make use of FCD instruments remains unchanged, the extent to which these instruments are being used drops substantially from an average of 39.5% pre-Euro to 10% post-Euro. This finding provides micro evidence at the corporate level in support of the cumulative BIS figures. In a second stage regression where we use FX exposure as the dependent variable, we find some evidence that the use of FCD is associated with a lower level of FX exposures after the introduction of the Euro, although the impact of intra-Europe and outside Europe sales on FX exposures is largely unclear. Finally, as obvious from the R-squared statistics, our set of independent variables based on firm characteristics appears to explain a greater proportion of variations in post-Euro FX exposures as opposed to pre-Euro FX exposures of French firms. The remainder of our paper is structured as follows. In the next section, we offer a brief review of the literature on FX exposure. Section 3 describes the sample and econometric framework used. We discuss the results in Section 4 and Section 5 concludes.

Our goal in this paper is to examine the impact of the introduction of the Euro on FX exposures for a sample of French firms. We extend the analysis by investigating how the change in corporate FX exposure impacts on their FCD usage. Finally, we provide empirical evidence relating to the role of FCD in hedging FX exposure in pre- and post-Euro periods. Our findings suggest that the introduction of the Euro is associated with a reduction in both the number of firms that have significant FX exposure and the magnitude of exposure. In response to this declined exposure, firms tend to use FCD less intensively after the introduction of the Euro although the proportion of firms which make use of these instruments remains unchanged. This result is consistent with the argument that the Euro only alleviates, not eliminates, FX exposure. We also find some evidence that the use of FCD is related to a lower level of FX risk for this sample of French corporations. Nevertheless, there is no sufficient evidence to conclude that the use of FCD is more likely to be associated with lower FX exposures in a post-Euro compared to a pre-Euro period. In contrast to Jorion (1990) who advanced the role of foreign sales as a major determinant of FX exposure, we fail to find convincing evidence that the degree of foreign sales (either outside or inside-Europe) demonstrates a consistent relation with FX exposure. Similarly, the number of foreign subsidiaries, our alternative measure of the degree of multinationality, shows little power in explaining FX exposure for French firms.