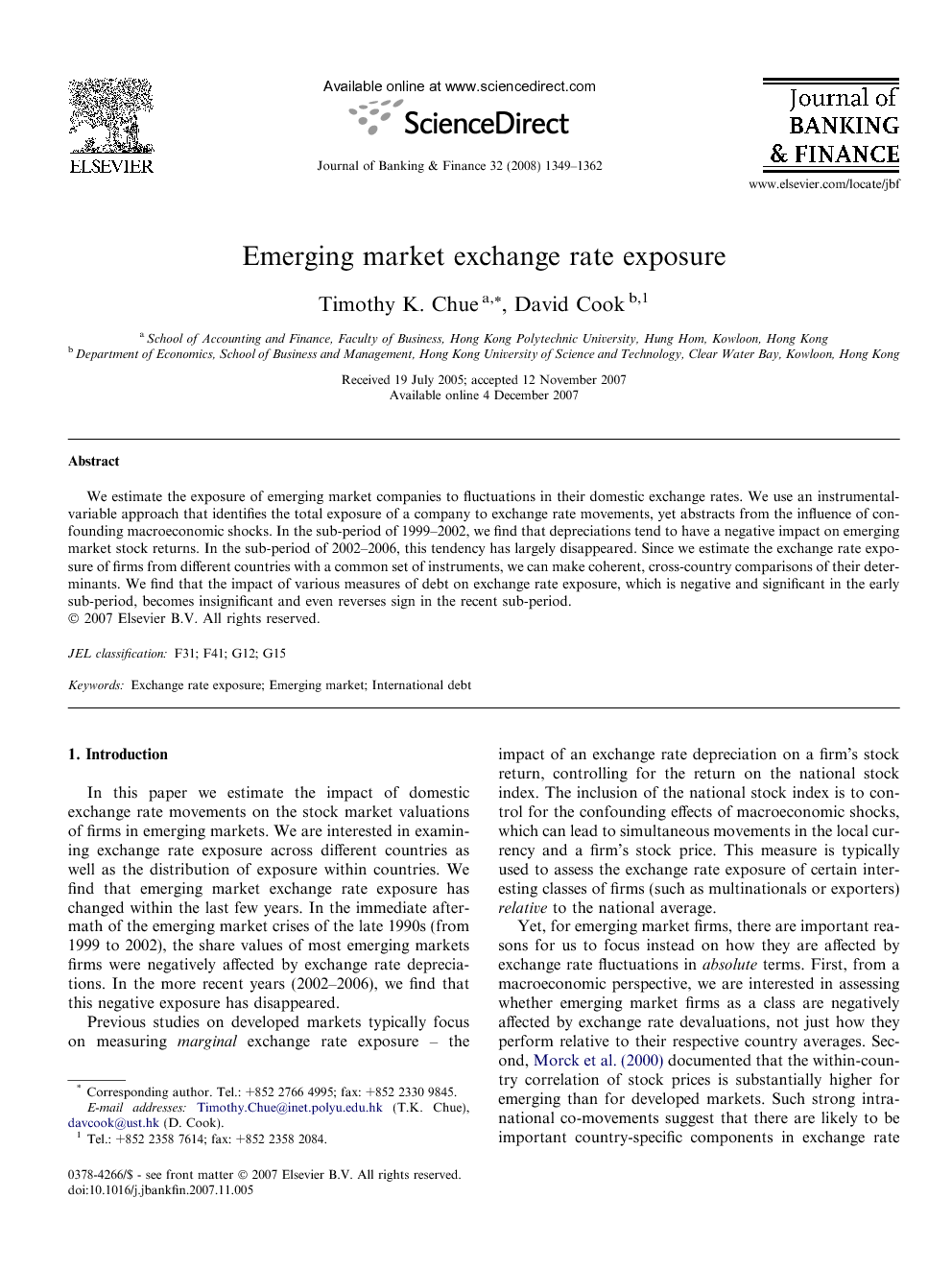 We estimate the exposure of emerging market companies to fluctuations in their domestic exchange rates. We use an instrumental-variable approach that identifies the total exposure of a company to exchange rate movements, yet abstracts from the influence of confounding macroeconomic shocks. In the sub-period of 1999–2002, we find that depreciations tend to have a negative impact on emerging market stock returns. In the sub-period of 2002–2006, this tendency has largely disappeared. Since we estimate the exchange rate exposure of firms from different countries with a common set of instruments, we can make coherent, cross-country comparisons of their determinants. We find that the impact of various measures of debt on exchange rate exposure, which is negative and significant in the early sub-period, becomes insignificant and even reverses sign in the recent sub-period.

In this paper, we use an instrumental-variable technique to identify the total exposure of emerging market equities to exchange rate changes. This total exposure includes both the exchange rate exposure at the national level and the firm-level differences within a country. Using this instrumental-variable approach, we detect changes in the exchange rate exposure of emerging market stock returns over time. In the early sub-period of January 1999–June 2002, immediately following the emerging market currency crises of the 1990s, emerging market firms are mostly negatively exposed to exchange rate changes. In the recent sub-period of July 2002–June 2006, this negative exposure disappears. The traditional approach of estimating marginal exposure (by controlling for the national stock market return) would not be able to discover this broad, market-wide change over time. We go on to investigate the country-level and firm-level determinants of exposure. We find that in the early sub-period, there is a negative relationship between a company’s exchange rate exposure and (1) its level of international, foreign-currency debt; (2) its level of total debt; and (3) the level of external debt of the country in which the company is located. By contrast, in the recent sub-period, the relationship between debt and negative exchange rate exposure, at both the firm and country level, disappears and even reverses sign. The standard methodology used by previous studies would not have revealed the changing role of national debt levels in determining exchange rate exposure. This decline in negative exchange rate exposure coincides with a changing structure in many emerging markets’ debt. Eichengreen et al. (2006) outlined some of the structural changes being made in the East Asian and Latin American bond markets. In many countries, we observe very rapid growth in the market for domestic securities. McCauley and Jiang (2004) reported that, since the Asian crisis, Asia’s local currency bond markets have grown larger than its foreign-currency counterpart. At the same time, as documented by Jeanneau and Tovar (2006), there is a rapid growth in the Latin American domestic debt markets, which also exhibit lengthened maturity and a lower prevalence of currency- and inflation-indexed debt.10Table 6 presents the ratio of outstanding foreign-currency bonds to domestic-currency bonds for all countries in our sample (except Morocco), in the first quarter of 1999 and in the second quarter of 2006. In 9 out of the 14 countries, there is a noticeable decline in the size of the international bond market relative to the domestic bond market. Only in three countries is there a substantial increase in the relative size of the foreign bond market. More broadly, data from the Bank for International Settlements (BIS) show that, in June 2002, the notional value of OTC exchange rate derivatives in currencies outside the top 13 largest currencies was equivalent to 2.2 trillion. By June 2006, this sum had increased to 6.7 trillion. Over the same period, interest-rate securities in currencies outside the top 12 currencies increased from 2.3 trillion US dollars to more than 8 trillion. Although we cannot break down this data further by currency, the rapid growth in derivatives markets may have increased the opportunities for emerging market firms to hedge their exchange rate risks.