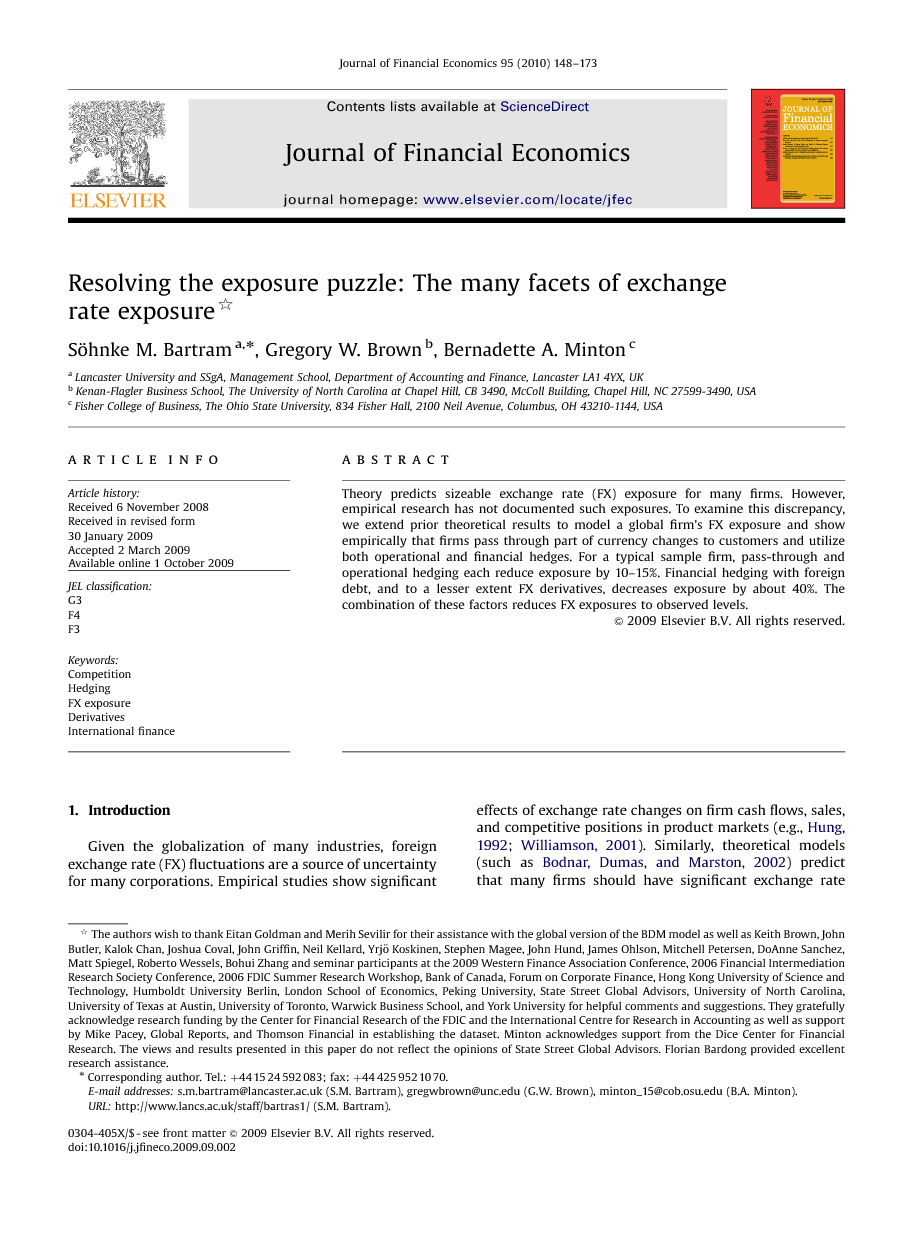 Theory predicts sizeable exchange rate (FX) exposure for many firms. However, empirical research has not documented such exposures. To examine this discrepancy, we extend prior theoretical results to model a global firm's FX exposure and show empirically that firms pass through part of currency changes to customers and utilize both operational and financial hedges. For a typical sample firm, pass-through and operational hedging each reduce exposure by 10–15%. Financial hedging with foreign debt, and to a lesser extent FX derivatives, decreases exposure by about 40%. The combination of these factors reduces FX exposures to observed levels.

Previous studies have examined in detail independent channels that give rise to exchange rate exposure, but little academic research has investigated the interrelationships between these determinants. For example, the associations between exchange rate exposure, product market competition, and corporate risk management are not well understood. This paper takes a step toward filling this gap by examining these relations for a global sample of nonfinancial companies. Specifically, we assume corporate financial managers can use pricing policies, operational hedging (e.g., international allocation of production costs), and financial hedging strategies in order to mitigate the effects of currency fluctuations. Moreover, these decisions are not made under the assumption that the firm operates in isolation, but rather after a detailed analysis of the industry's situation and the actions of industry peers. Thus, by reflecting the broader economic context the firm is operating in and the nature of competition it is facing, firm-level decisions make foreign exchange exposure endogenous. Our primary results suggest that each of the three channels for mitigating exchange rate exposure is likely to be important for our sample of large global manufacturing firms. Exchange rate pass-through and operational hedging are each responsible for about a 10–15% reduction in exposure, and financial risk management accounts for about another 37–43% decrease in exposure relative to a hypothetical firm that cannot mitigate exposure at all. Altogether, firms reduce their gross exchange rate exposure by about 70% via the three channels to levels measured from equity prices. Consequently, our analysis suggests that the relatively weak foreign exchange rate exposure, which has been considered a puzzle by some, is to be expected once accounting for all the relevant factors. In particular, firms implicitly appear aware of their gross exposures and adjust their operations and financing activities. Our results point to a need for further research examining the precise role of financial risk management in globally competitive corporations.31 Overall, our study contributes to the literature in several ways. First, we take a more comprehensive approach to studying exchange rate exposure. For example, the model we derive allows for global firms in an imperfectly competitive global market. Second, our sample of firms using financial risk management to mitigate exchange rate exposure is among the largest examined to date. Finally, and most importantly, we are able to shed light on a puzzle in financial economics by carefully decomposing the close relationship between theoretical and observed foreign exchange rate exposures.