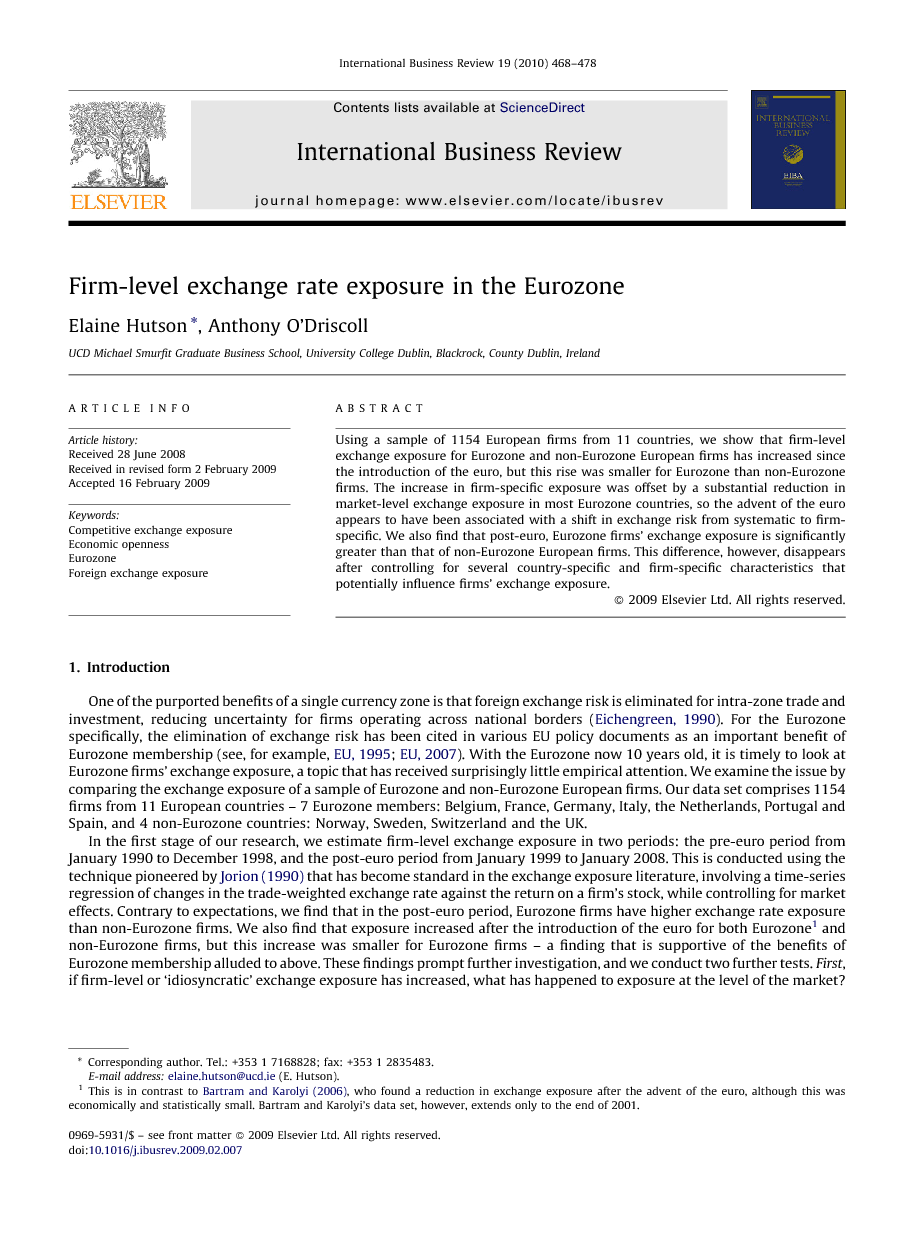 One of the purported benefits of a single currency zone is that foreign exchange risk is eliminated for intra-zone trade and investment, reducing uncertainty for firms operating across national borders (Eichengreen, 1990). For the Eurozone specifically, the elimination of exchange risk has been cited in various EU policy documents as an important benefit of Eurozone membership (see, for example, EU, 1995; EU, 2007). With the Eurozone now 10 years old, it is timely to look at Eurozone firms’ exchange exposure, a topic that has received surprisingly little empirical attention. We examine the issue by comparing the exchange exposure of a sample of Eurozone and non-Eurozone European firms. Our data set comprises 1154 firms from 11 European countries – 7 Eurozone members: Belgium, France, Germany, Italy, the Netherlands, Portugal and Spain, and 4 non-Eurozone countries: Norway, Sweden, Switzerland and the UK. In the first stage of our research, we estimate firm-level exchange exposure in two periods: the pre-euro period from January 1990 to December 1998, and the post-euro period from January 1999 to January 2008. This is conducted using the technique pioneered by Jorion (1990) that has become standard in the exchange exposure literature, involving a time-series regression of changes in the trade-weighted exchange rate against the return on a firm's stock, while controlling for market effects. Contrary to expectations, we find that in the post-euro period, Eurozone firms have higher exchange rate exposure than non-Eurozone firms. We also find that exposure increased after the introduction of the euro for both Eurozone1 and non-Eurozone firms, but this increase was smaller for Eurozone firms – a finding that is supportive of the benefits of Eurozone membership alluded to above. These findings prompt further investigation, and we conduct two further tests. First, if firm-level or ‘idiosyncratic’ exchange exposure has increased, what has happened to exposure at the level of the market? We find that market-level exchange rate exposure has declined in Eurozone countries by more than it has in non-Eurozone European countries. Second, we investigate why firms in the Eurozone have higher exchange exposure than firms in our sample of non-Eurozone countries. Using the exchange response coefficients estimated from the firm-specific time-series regressions as the dependent variable, we run cross-sectional regressions to determine whether this difference can be explained by country-level and firm-specific factors that have been found in prior studies to explain exchange exposure. The country-level factors are economic openness, shareholder rights and creditor rights; and the firm-specific factors are size, industry, and four financial ratios: debt-to-assets, market-to-book, dividend payout and the quick ratio. After controlling for these characteristics, we find no difference between the firm-specific exchange exposure of firms within and outside the Eurozone. The remainder of this paper is structured as follows. In Section 2 we describe our approach to estimating firm-level exchange exposure and present our data set. Sections 3 and 4 present our findings on firm-level and market-level exchange exposure respectively. In Section 5 we discuss and present our findings on the firm-level pooled cross-sectional analysis, and in Section 6 we discussion the implications for corporate strategy. Section 7 provides concluding comments.