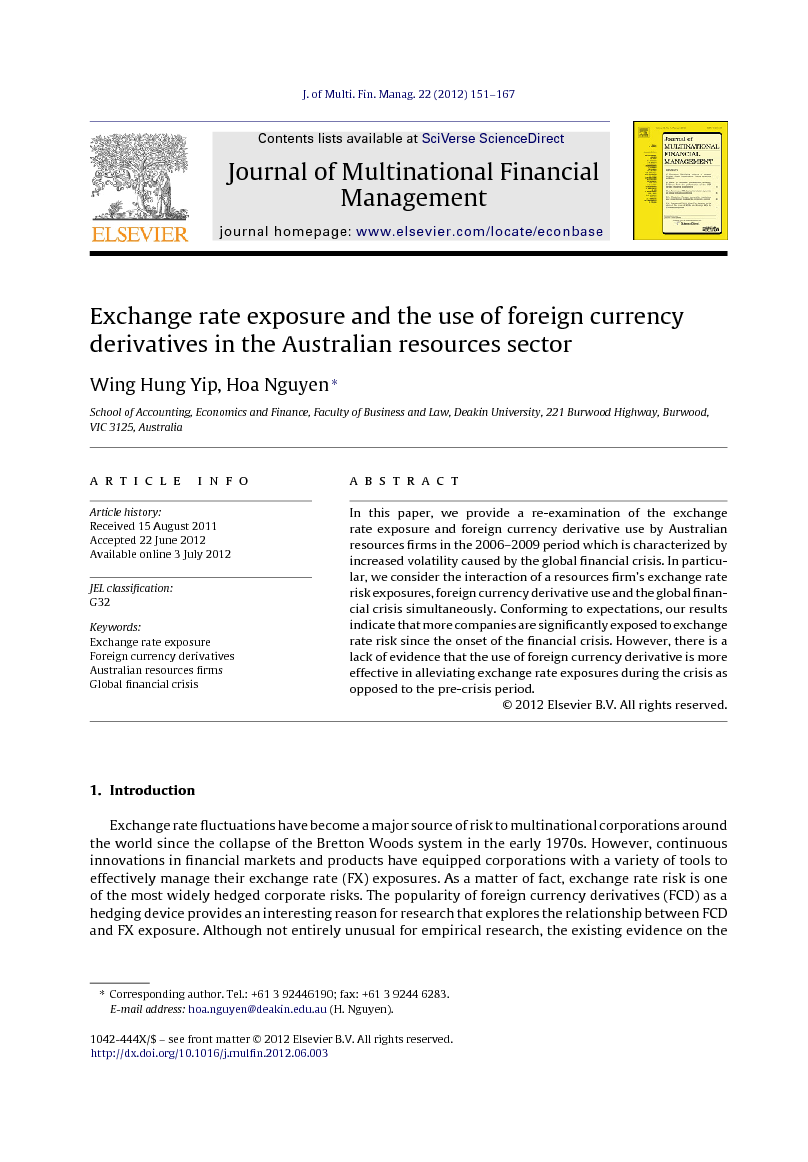 In this paper we examine the FX exposures of a sample of Australian resources companies and how FCD use can potentially alleviate such exposures. Through an investigation of firm behavior in response to an exogenous exchange rate shock caused by the GFC, we accordingly contribute to the literature by offering findings in relation to the dynamic of the relationship between FX exposures and FCD usage. Our focus on resources companies offers several notable advantages. The resources industry is more homogenous than its industrial counterpart. Its component companies have exposure profiles that are more well-defined and transparent due to the nature of their operations. These industry-specific characteristics allow for a more robust test of the impact of FCD on FX exposures. Using an augmented market model to estimate FX exposures, a large population of Australian resources firms is found to have significant exposure to exchange rate movements. FX exposures, however, are time-varying with a significant increase in both the number of exposed firms and the absolute level of exposure during the GFC. In the presence of the increasing level of exposure, firms responded by using more FCD although the number of FCD users, if anything, appears to reduce slightly during the crisis. This finding offers an interesting insight into corporate risk management behavior. Increased exposure, per se, is not a sufficient condition for the adoption of financial derivatives. Rather, firm size seems to be a more powerful determinant of FCD usage. Consistent with the notion that the use of FCD is primarily for hedging purposes, there are some partial evidence that the use of FCD is associated with a reduction in firm FX risk despite the economic significance of the exposure reducing property of FCD during the crisis is relatively lower than before the crisis. To the extent that corporations monitor the effectiveness of their hedging strategy, it is expected that firms with significant FX exposure have changed their level of FCD use accordingly during the financial crisis. Nevertheless, there is not sufficient evidence to conclude that an increased level of FCD use results in lower FX exposure during the crisis. Taken together, we provide strong evidence that Australian resources firms on average are sensitive to exchange rate movement, particular so during periods of high volatility. However, having significant exchange rate exposure appears to be a characteristic of smaller firms. Large resources multinationals are associated with a lower level of exposures as they are more likely to engage in financial hedges employing FCD. Arguably, larger firms are also better positioned to undertake operational hedges that involve a combination of long term financing, marketing and investment strategies. An investigation of operational hedges is an interesting avenue for future research in a bid to gain a better understanding of the integrated risk management approach by the Australian resources sector.