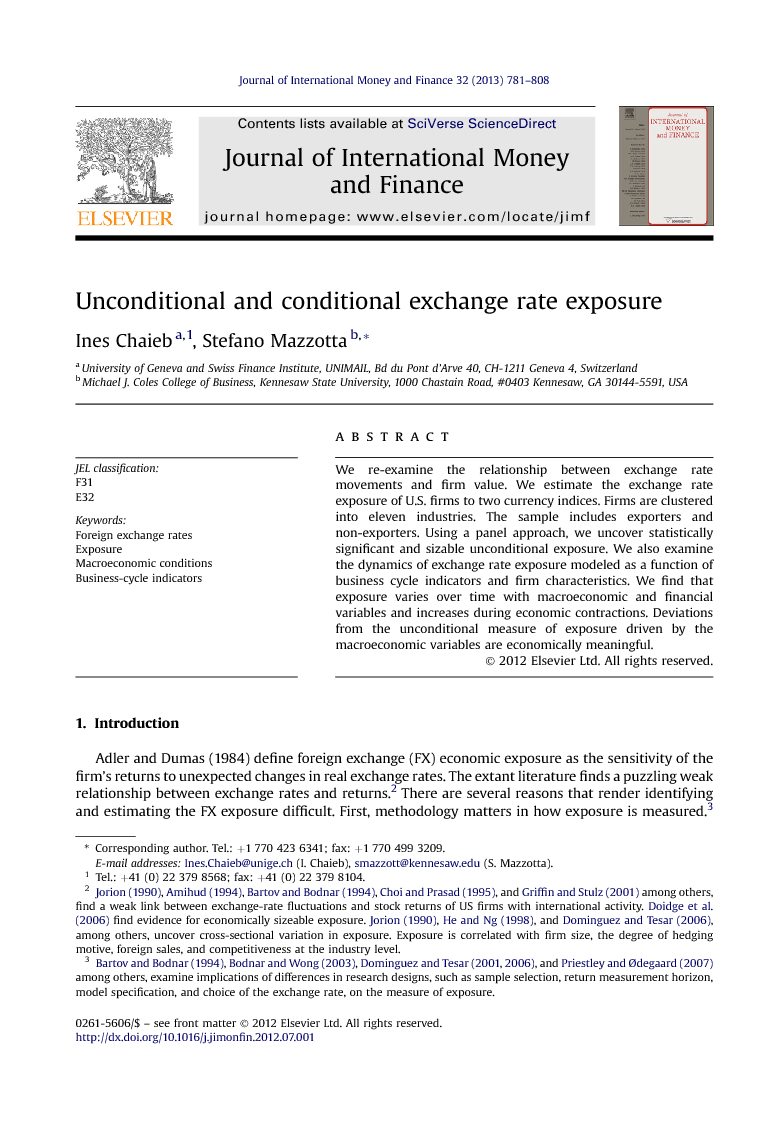 We re-examine the relationship between exchange rate movements and firm value. We estimate the exchange rate exposure of U.S. firms to two currency indices. Firms are clustered into eleven industries. The sample includes exporters and non-exporters. Using a panel approach, we uncover statistically significant and sizable unconditional exposure. We also examine the dynamics of exchange rate exposure modeled as a function of business cycle indicators and firm characteristics. We find that exposure varies over time with macroeconomic and financial variables and increases during economic contractions. Deviations from the unconditional measure of exposure driven by the macroeconomic variables are economically meaningful.

We study industry level exposure to the major and the emerging market currency indexes using firm level data as opposed to industry indices. We measure exposure both in a static and in a conditional framework. Using firm-by-firm regressions we replicate the well known and puzzling result in the literature that only a relatively small number of firms show significant exposure coefficients. However, the Fama MacBeth t-tests of the estimated exposure coefficients suggest that the average of the exposure coefficients are significantly different from zero in most industries. Moreover, formal inferences based on a random coefficient panel approach provide strong evidence that the exposure to the two currency indexes, and particularly to the emerging market index, is statistically and economically significant. Our findings also highlight the important role that emerging markets play in the U.S. economy. We also provide a detailed statistical analysis of the exposures by introducing additional controls, by examining exporters and non-exporters separately, and by looking at two sub-periods. We then relate our findings to trade balances of US industries by region. We uncover two important facts. First, there is sensible time variation in exposures to both currency indices. Second, the results are overall consistent with the changes in the trade balance for some industries vis-à-vis their developed and emerging market partners. In addition, we analyze the cross sectional determinants of exposure. Exporters and non-exporters show noticeable qualitative similarities both in their level of exposure and the determinants of the exposures. Our findings are broadly consistent with the hedging argument. They show that the level of exposure is negatively related to size, and growth opportunities, while positively related to the degree of international involvement and leverage. We also examine the dynamics of exposure. We use a parametric specification to model the time variation in exposure. The advantage of such an approach is that it explicitly links time variation in exposure to macroeconomic state variables and firm characteristics. We use the default premium and the term premium for their ability to capture the macroeconomic conditions and report results about financial leverage and liquidity for firm characteristics. We also run extensive robustness tests using a wide array of both macroeconomic and firm variables. Our conditional results can be summarized as follows. The exposure to the two currency indexes is significantly time-varying except in Chemicals and Telephone & TV industries and the economic importance of exposure varies over time. The dynamics of exposure to the two currency indexes are mainly driven by business-cycle indicators and macroeconomic variables and are such that excess exposure increases during economic contractions. Using the case of Non-Durables industry, we illustrate how the unconditional measure of exposure could significantly under or over-state the effect of exchange rate fluctuations on stock returns. The under or over estimation of exposure is economically meaningful both in relative and absolute terms. The robustness results confirm that the exposure's dynamics are mainly driven by the macroeconomic variables.