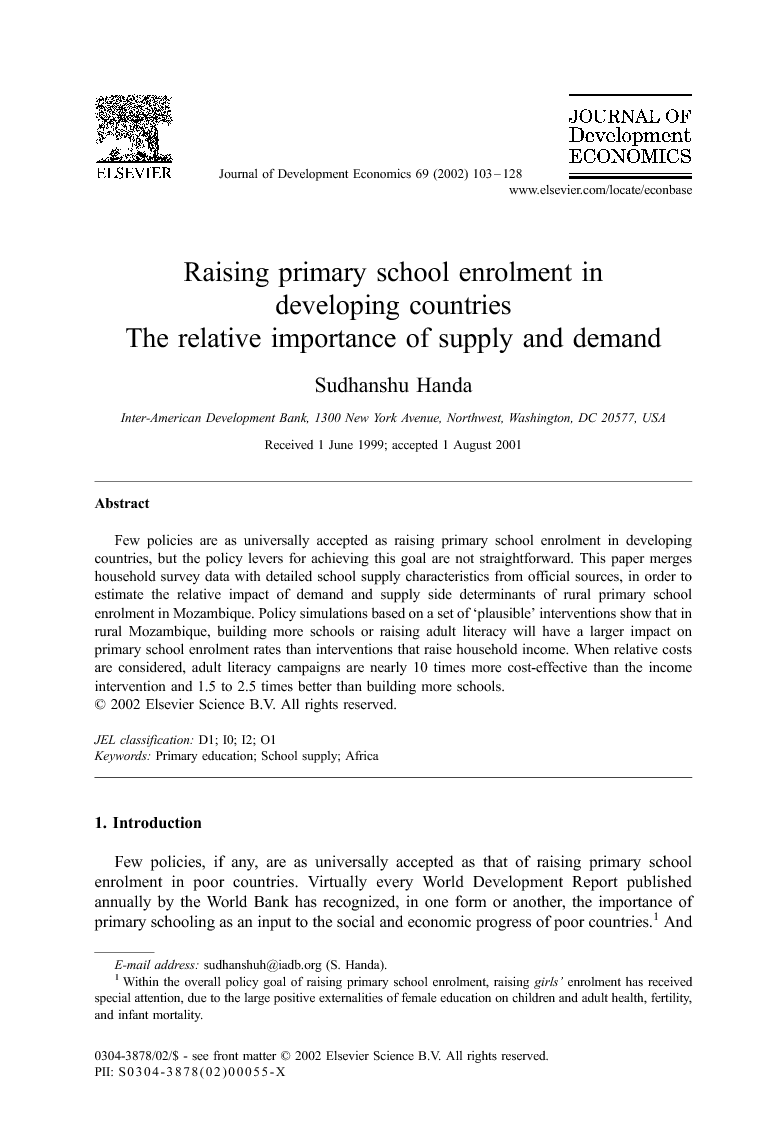 Few policies are as universally accepted as raising primary school enrolment in developing countries, but the policy levers for achieving this goal are not straightforward. This paper merges household survey data with detailed school supply characteristics from official sources, in order to estimate the relative impact of demand and supply side determinants of rural primary school enrolment in Mozambique. Policy simulations based on a set of ‘plausible’ interventions show that in rural Mozambique, building more schools or raising adult literacy will have a larger impact on primary school enrolment rates than interventions that raise household income. When relative costs are considered, adult literacy campaigns are nearly 10 times more cost-effective than the income intervention and 1.5 to 2.5 times better than building more schools.

Few policies, if any, are as universally accepted as that of raising primary school enrolment in poor countries. Virtually every World Development Report published annually by the World Bank has recognized, in one form or another, the importance of primary schooling as an input to the social and economic progress of poor countries.1 And within the academic literature, a host of studies has documented the market and nonmarket return that comes from completing primary schooling, both in poor and rich countries alike.2 However, raising primary school enrolment in developing countries is easier said than done. The relative importance of school supply versus household demand factors remains controversial, with serious implications for education policy.3 For example, if children's enrolment rates are not responsive to local school infrastructure, government interventions aimed at increasing access to schools will have very limited impact on overall schooling levels, thus effectively reducing the set of options available to policymakers. And even if regional variations in schooling infrastructure can be related to household schooling choices, as several studies have shown,4 efficient policy decisions require knowledge of the particular dimensions of school infrastructure that matter most. This latter issue is contentious in both developing and developed countries alike, and has been the topic of several recent articles seeking to measure the type of schooling infrastructure (access, quality, etc.) that makes a difference for household schooling choices.5 This study makes three main contributions to the literature on primary school enrolment policies and school infrastructure in developing countries. First, the impact of school characteristics on household primary school enrolment decisions are measured using a diverse set of school ‘quality’ indicators. Aside from information on distance to the nearest school, detailed information on school characteristics is hard to find in developing countries, and as a result, the available published literature is small relative to that for developed countries.6 This study thus provides an additional set of estimates with which to assess the role of specific supply side factors in determining student outcomes. Moreover, school characteristics are measured with the actual data that Mozambique's Ministry of Education uses to formulate its regional and national targets, and to develop its 5-year plans, thus enhancing the policy relevance of the work. Second, unlike most previous studies in this area, the interaction between school and household characteristics is explored to see if complementarity or substitutability exists between these two sets of factors in determining school enrolment.7 The existence of significant interactions can provide important clues about who benefits the most from school supply interventions, and where programs or resources should be placed in order to benefit the most vulnerable. For example, a significant positive interaction between household income and school access in a particular region implies that building additional schools in this region will benefit richer households more than poorer ones. However, policymakers may want to target regions where the poor are more likely to benefit from the provision of schools, hence, knowledge of specific interactions can provide useful information to help prioritize program placement. Third, policy simulations are presented based on separate and ‘plausible’ supply and demand side interventions, and used to evaluate which type of intervention will have the largest impact on primary school enrolment rates. The standard policy analysis contained in studies on school supply typically evaluates the effect on the outcome of interest (for example, test scores or grade attainment) for a given change in a statistically significant school supply variable (e.g. travel time to school) by multiplying the given change by the relevant coefficient. Although statistically valid, the policy relevance of this exercise can be enhanced significantly by recognizing that governments in the short or medium run cannot supply 10 more books to every school, or fix every leaking roof in the country. A typical policy intervention in the short run will involve adding more teachers in some regions and not others, or building a few schools in a few regions. This paper estimates the change in primary school enrolment that would come about from a set of more realistic interventions such as building a few schools in specific regions, or targeting adult education or income-generating programs only among the poorest households. These simulations arguably provide a better picture of the expected benefits of the type of interventions available to developing country governments in the short and medium term. The data used in this paper are from Mozambique, a country that has suffered from over 25 years of armed conflict, and that is acknowledged by development experts as one of the world's poorest. Estimates from the rural region of this country show that both demand and supply factors are important determinants of primary school enrolment. On the supply side, dimensions of school quality (the number of trained teachers) and access all have significant effects on household enrolment decisions. However, the policy simulations show that school access on the supply side, and adult education on the demand side, are the biggest factors in impeding primary school enrolment. When relative costs are considered, interventions that raise adult literacy turn out to be the most efficient alternative for raising primary school enrolment in rural Mozambique.

Raising primary school enrolment is a major development imperative, although the interventions that can best raise enrolment are not always straightforward, and can vary both between and within countries. Using the first national household survey of Mozambique, coupled with detailed information on school infrastructure supplied by the Ministry of Education, this paper evaluates the relative importance of supply and demand side factors in determining rural primary school enrolment. Simulations based on a set of ‘plausible’ demand and supply side interventions indicate that in rural Mozambique, building more schools or raising adult literacy will have a larger impact on enrolment rates than interventions that raise household income. For example, raising the EP1 coverage rate to 79% in rural areas will increase enrolment rates by 13%, while making household heads literate in the bottom per capita consumption quartile will raise rural primary school enrolment by 8%. In contrast, bringing per capita consumption of the poorest quartile up to Mt. 2494 per day will raise rural enrolment by a mere 2%. When relative costs are considered, adult literacy campaigns become more attractive, with cost-effectiveness ratios that are 6–10 times better than the income intervention, and 1.5–2.5 times better than building more schools. Even if we assume that half the measured benefit of adult literacy is through unmeasured tastes for, or ability in, acquiring human capital, adult literacy is just as cost-effective as extending coverage through school infrastructure. The detailed analysis of the impact of school characteristics on primary school enrolment in rural Mozambique indicates that dimensions of school quality and access both work to stimulate enrolment, although the effects are small and differ somewhat by gender of child. School quality, measured by the number of trained teachers in the administrative post, has a positive and significant impact on enrolment, but it is the gender composition of the trained teaching staff that is even more important in determining the household decision to send children to school. For example, the share of female teachers who are trained is an important positive determinant of enrolment rates. Raising this ratio from 0.08 to 0.16 in the administrative post will raise enrolment rates by roughly 4 percentage points. School availability also has a significant impact on enrolment rates. Reducing the travel time to the nearest school will increase enrolment rates for both sexes by 17–20 percentage points, and the impact of school availability is enhanced for girls if the school is built with cement. Few previous studies have considered the possible interaction between school supply indicators and household characteristics. In Mozambique, these exist particularly for girls. In terms of policy, the most interesting of these is the positive interaction between travel time to a school and household income, which implies that the two factors are substitutes—construction of a village school will increase enrolment more among poorer households. Additionally for girls, there is a positive interaction among household income, cement classrooms, and the number of trained teachers in the area.