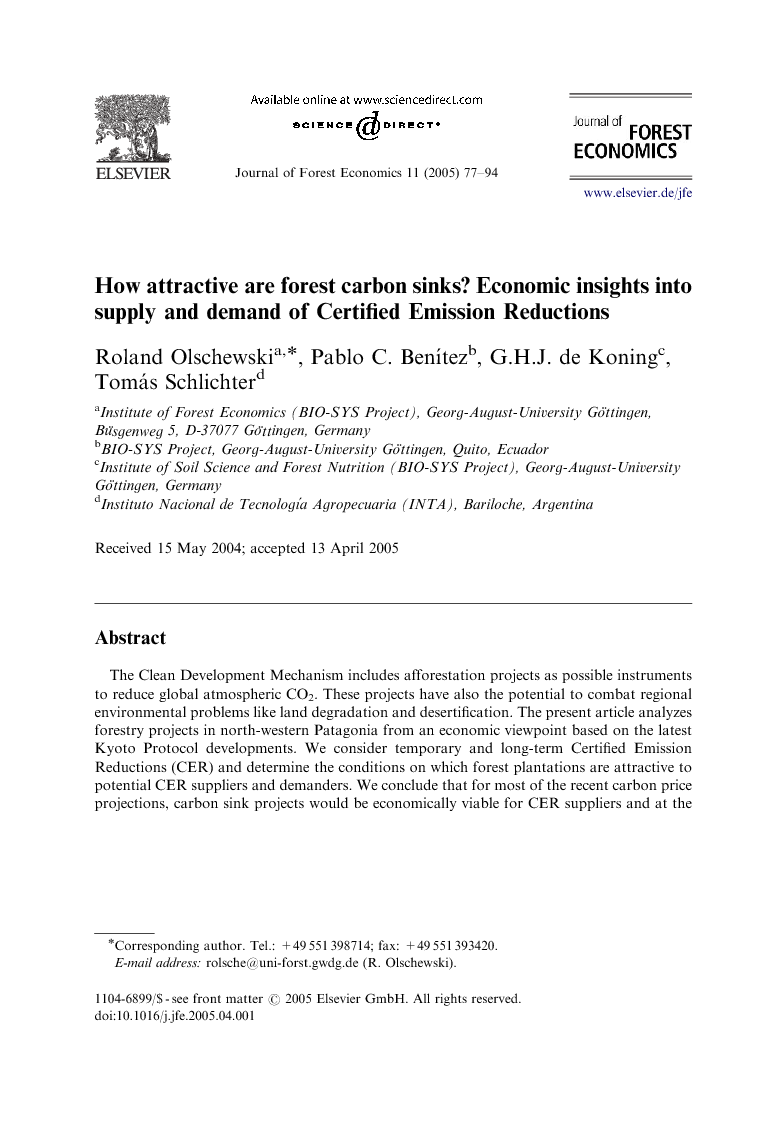 The Clean Development Mechanism includes afforestation projects as possible instruments to reduce global atmospheric CO2. These projects have also the potential to combat regional environmental problems like land degradation and desertification. The present article analyzes forestry projects in north-western Patagonia from an economic viewpoint based on the latest Kyoto Protocol developments. We consider temporary and long-term Certified Emission Reductions (CER) and determine the conditions on which forest plantations are attractive to potential CER suppliers and demanders. We conclude that for most of the recent carbon price projections, carbon sink projects would be economically viable for CER suppliers and at the same time attractive to CER demanders looking for cost-efficient emission abatement opportunities.

Human-induced land-use changes can have a strong impact on natural resources. Possible negative consequences at the regional level are soil erosion and desertification, but land-use changes are also related to global environmental problems. Deforestation, e.g., is an important source of atmospheric carbon dioxide, which enhances global climate change. Afforestation and reforestation projects (AR projects) potentially reduce both regional and global environmental problems: desertification processes might be reversed and climate change could be mitigated by withdrawing CO2 from the atmosphere. Within this context, we analyze afforestation projects in Argentinean Patagonia. About 84% of the surface of Patagonia shows moderate to very severe degrees of desertification (del Valle et al., 1997) and reforestation has been proposed as one of the activities to protect soils and combat desertification in the region. In spite of the fact that more than 2,500,000 ha are suitable for conifer plantations, only about 70,000 ha of plantation exist in the region (Laclau et al., 2003). One reason could be that forest plantations are not attractive from the economic point of view. Additional payments for eco-system services like carbon sequestration could change this situation. Within the Clean Development Mechanism (CDM) of the Kyoto Protocol of Climate Change, industrialized countries have the opportunity to invest in AR projects in developing countries for compliance of their emission caps. Recently, various authors have dealt with this issue. While some developed optimal control models to determine optimal afforestation levels (see, e.g., Wilman and Mahendrarajah, 2002; van Kooten, 2000), our study focuses on the implications of the new accounting rules concerning Certified Emission Reductions (CER), which were decided on at the Conference of the Parties (COP9) in December 2003. During the first commitment period from 2008 to 2012 there are two possible ways to account for carbon sequestration in forests: temporary credits or long-term credits (UNFCCC, 2003). In this article, we have a closer look at the supply and demand side of CER using north-western Patagonia as a case study. The question arises, under which condition temporary or long-term credits would be attractive to potential suppliers and demanders, and how does this attractiveness depend on the price of permanent emission reductions? Potential CER suppliers are landowners in Non-Annex-1 countries (in our case Argentina), deciding whether to switch from non-forest land use to forestry. Potential CER demand comes from CO2-emitting enterprises in Annex-1 countries or governments of these countries, which have to fulfill their reduction commitments. We show the economic rationale behind the decisions of suppliers and demanders and point out under which condition economic attractiveness of carbon sink projects can be achieved. Furthermore, we provide information on the relationship between the prices of temporary, long-term and permanent emission reductions.

Establishing forest plantations in Patagonia is a means to reduce regional as well as global environmental problems. Our study provides information on the economic feasibility of such projects based on the latest developments in the Kyoto process. We find that the attractiveness of forest plantation projects is influenced by determinants on both the supply and demand side of CER. Long-term credits result more attractive to buyers, but have the disadvantage of a reduced flexibility for the supplier. In contrast, temporary credits allow for a short-term re-allocation of land, which is advantageous for suppliers, but at the same time reduces their attractiveness to buyers who look for safe and long-term solutions of their reduction commitments. However, if discount rates in developing countries (sellers) are higher than in industrialized countries (buyers), lCER accounting is economically more attractive to both sides than tCER. Our results include the determination of benchmark prices of permanent CER, which can be compared with real market prices of emission reduction units. At the moment, various estimates of future prices for permanent carbon credits exist. The BioCarbon Fund proposed a lower limit for a price margin of $3/tCO2 (The World Bank, 2003). Den Elzen and de Moor (2002) analyzed the potential effects of the Bonn Agreement and the Marrakesh Accords on the CER market price and estimated a level of about $4.5–5.5/tCO2. The International Emission Trading Agency forecasts CER prices that range from $9.9 to $13.7 (IETA, 2003). The OECD Global Forum on Sustainable Development expects prices from $9 to $22 for the ETS within the European Union (Grubb, 2003), whereas the latest PointCarbon (2004) estimates come to an expected average price of $10/tCO2, including potential price effects of the latest agreement on the German national allocation plan. Comparing these estimates with the results of our scenarios leads to the conclusion, that carbon sink projects in north-western Patagonia can be an attractive alternative for enterprises in Annex-1 countries, which have to fulfill their emission reductions. This is especially the case, if afforestation takes place on degraded and abandoned pasture land, where opportunity costs are zero. A sensitivity analysis shows that if decisive variables change in a range of ±25%, the benchmark price of permanent credits remains within the limits of reference prices given above. Additionally, the minimum payments (calculated in US dollar) that are required to make forestry a feasible land-use alternative have been drastically reduced due to the peso devaluation. This is a comparative advantage of Argentina, which is especially important in case of high differences between interest rates, when non-permanent credits become less attractive. If we assume that forestry products are mainly produced for the domestic market, whereas meat is exported and factored in US$ this comparative advantage is reduced due to increasing opportunity costs when switching from pasture to forestry. However, from the economic point of view, degraded or abandoned pastures suitable for ponderosa pine plantations remain attractive areas for carbon sink projects and could contribute to combat the desertification process in Patagonia. The presented methodology supports the decision-making process on the supply and demand side of a future carbon credit market. Focusing on the development aspect of CDM means that forestry projects within this mechanism should generate higher income than the status quo. In case permanent credit prices reach a level like the ones proposed by the BioCarbon Fund, a regional welfare improvement remains questionable. However, with higher prices as according to the IETA-, OECD- or PointCarbon-forecast, the CDM could achieve both: development objectives in Argentina and cost-efficient emission abatement in Annex-1 countries.