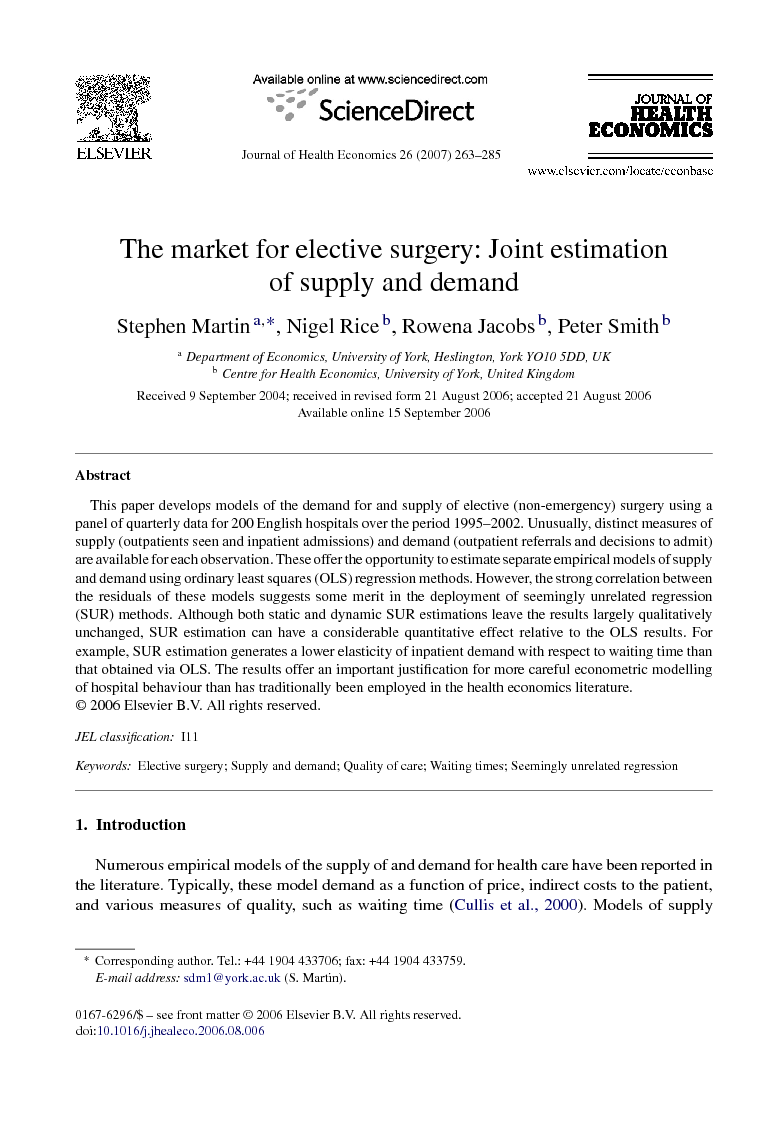 This paper develops models of the demand for and supply of elective (non-emergency) surgery using a panel of quarterly data for 200 English hospitals over the period 1995–2002. Unusually, distinct measures of supply (outpatients seen and inpatient admissions) and demand (outpatient referrals and decisions to admit) are available for each observation. These offer the opportunity to estimate separate empirical models of supply and demand using ordinary least squares (OLS) regression methods. However, the strong correlation between the residuals of these models suggests some merit in the deployment of seemingly unrelated regression (SUR) methods. Although both static and dynamic SUR estimations leave the results largely qualitatively unchanged, SUR estimation can have a considerable quantitative effect relative to the OLS results. For example, SUR estimation generates a lower elasticity of inpatient demand with respect to waiting time than that obtained via OLS. The results offer an important justification for more careful econometric modelling of hospital behaviour than has traditionally been employed in the health economics literature.

Numerous empirical models of the supply of and demand for health care have been reported in the literature. Typically, these model demand as a function of price, indirect costs to the patient, and various measures of quality, such as waiting time (Cullis et al., 2000). Models of supply depend more heavily on institutional arrangements, but typically require modelling of revenue sources, case mix and quality of care, as well as a range of ‘environmental’ factors that affect the provider's ability to produce care. In the hospital sector, examples include Goddard and Tavakoli (1998), Gravelle et al. (2003), Martin and Smith, 1999 and Martin and Smith, 2003 and Windmeijer et al. (2005). In this paper we concentrate on the market for elective (non-emergency) hospital surgery in a system of public health care (the English National Health Service). To date, most empirical modelling of supply and demand has been hampered by the availability of only one measure of the quantity of health care—namely, the amount delivered by a provider in a specified period. This quantity results from the interaction of supply and demand, and so the empirical analyst must either be content to model quantity as a reduced form equation, making policy inferences difficult, or resort to advanced econometric methods in an effort to model supply and demand separately. In contrast, in this study we have available distinct measures of supply and demand for each period, offering the opportunity to develop quite straightforwardly separate models of supply and demand. However, separate estimation of supply and demand models may ignore important information contained in the data and lead to serious estimation inefficiencies. Specifically, if the residuals from the supply and demand models are correlated, it may be the case that there are important variables omitted from the empirical models. Simultaneous modelling of supply and demand, using the methods of seemingly unrelated regressions (SUR), can take advantage of these correlation structures to offer more secure coefficient estimates. After deploying routine OLS methods, this paper employs SUR methods to model important links between supply and demand equations. As in most markets, some notion of price will often play an important part in any model of elective surgery, even in a public service system. Even if patients pay no direct price for care, there might be important variations in the opportunity cost of using different providers that we should seek to model. And on the supply side the provider's revenue stream must be modelled. In addition, one of the most important influences on the market for surgery is likely to be the notion of the quality of care. Health care quality can be considered under two broad headings: clinical quality, as expressed in health-related outcome measures such as quality-adjusted life years (QALYs), and responsiveness, the extent to which the health system performs in relation to non-health expectations, embracing notions such as patient autonomy and convenience (WHO, 2000). The routine collection and public dissemination of quality data is intended to affect both the demand for and supply of health care. On the demand side, patients and their representatives (such as general practitioners) might seek out the higher performing providers. On the supply side, given the right incentives, providers may strive to improve their reported quality. This paper therefore also seeks to incorporate quality measures into the model of elective surgical procedures in UK. The arguments set out above suggest that quality indicators will affect both the demand for and supply of elective surgery. This paper provides empirical estimates of the elasticities associated with such measures. Given the UK policy preoccupation with waiting times, we concentrate on variables associated with waiting. However, the models are of general relevance to examining the role of quality in supply decisions, and we therefore take the opportunity to examine the influence of the limited range of other quality measures available over the study period. This paper builds on previous studies that have estimated supply and demand functions for elective care. Martin and Smith, 1999 and Martin and Smith, 2003 estimated demand and supply models in which waiting time acts as a price that simultaneously deters demand and encourages supply. These studies were forced to assume that waiting lists were in equilibrium with the queue length relatively stable. Because we now have available separate measures of supply (outpatients seen and inpatient admissions) and demand (outpatient referrals and decisions to admit), this paper drops the assumption of equilibrium and estimates jointly supply and demand functions. In addition, because the waiting time data employed previously were based on individual records of patient care, the demand results were more robust than the rather rudimentary supply side findings. Here, with the hospital as the unit of analysis and access to a considerable database of hospital characteristics, modelling of the supply side is considerably strengthened, and we are also able to model for the first time both outpatient and inpatient care. The next section sets out a simple theoretical model of the determinants of demand and supply. Section 3 outlines the specific institutional context in UK, Section 4 describes the English hospital dataset that forms the centrepiece of the empirical study, and Section 5 provides estimation details. Both static and dynamic versions of the supply and demand models are presented in Section 6, first using OLS techniques, and then applying seemingly unrelated regression (SUR) methods. The paper concludes with an assessment of the implications of the study for modelling waiting times.