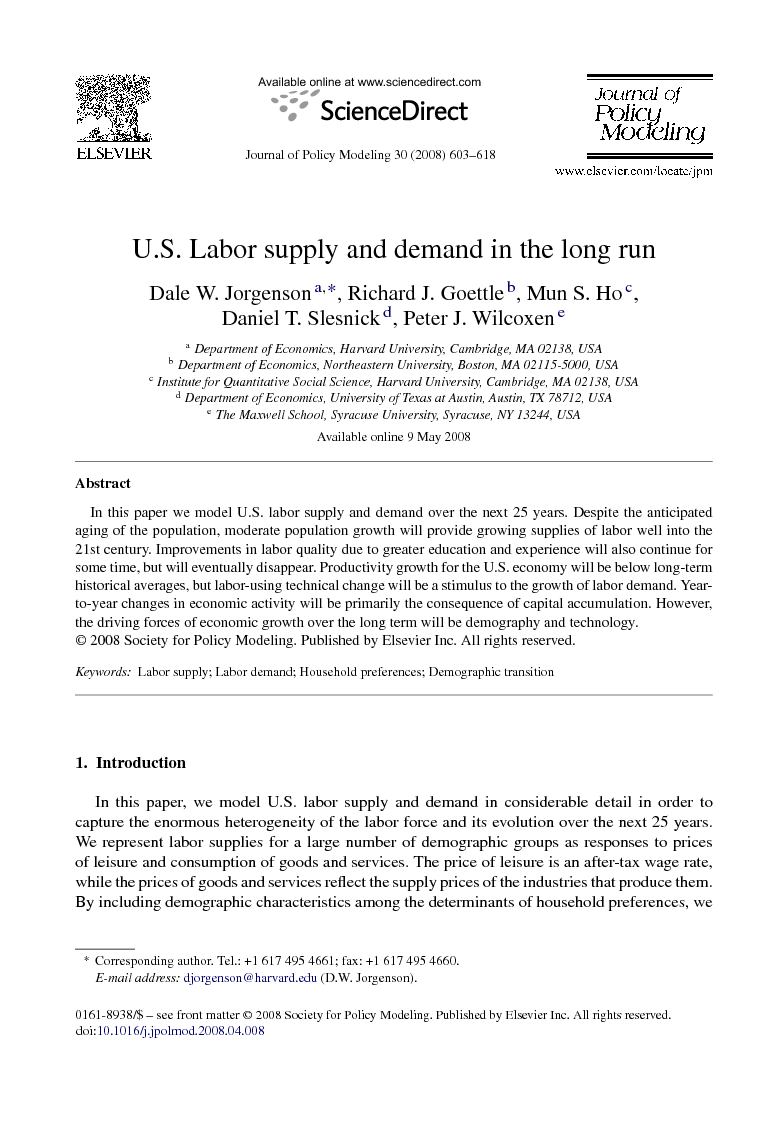 In this paper we model U.S. labor supply and demand over the next 25 years. Despite the anticipated aging of the population, moderate population growth will provide growing supplies of labor well into the 21st century. Improvements in labor quality due to greater education and experience will also continue for some time, but will eventually disappear. Productivity growth for the U.S. economy will be below long-term historical averages, but labor-using technical change will be a stimulus to the growth of labor demand. Year-to-year changes in economic activity will be primarily the consequence of capital accumulation. However, the driving forces of economic growth over the long term will be demography and technology.

In this paper, we model U.S. labor supply and demand in considerable detail in order to capture the enormous heterogeneity of the labor force and its evolution over the next 25 years. We represent labor supplies for a large number of demographic groups as responses to prices of leisure and consumption of goods and services. The price of leisure is an after-tax wage rate, while the prices of goods and services reflect the supply prices of the industries that produce them. By including demographic characteristics among the determinants of household preferences, we incorporate the expected demographic transition into our long-run projections of the U.S. labor market. The U.S. population will be growing older and elderly households have very different patterns of labor supply and consumption. Our projections thus incorporate the expected fall in the supply of labor per capita. These changes in labor supply patterns are the consequence of population aging, rather than wage and income effects. Despite the anticipated aging of the U.S. population, moderate population growth will provide growing supplies of labor well into the 21st century. Improvements in the quality of U.S. labor input, defined as increased average levels of educational attainment and experience, will also continue for some time, but will gradually disappear over the next quarter century. We represent labor demand for each of 35 industrial sectors of the U.S. economy as a response to the prices of productive inputs: labor, capital, and intermediate goods and services. In addition, labor demand is driven by changes in technology. Technical change generates productivity growth within each industry. Rates of productivity growth differ widely among industries, ranging from the blistering pace of advance in computers and electronic components to the gradual decline in construction and petroleum refining. In addition, changes in technology may be biased. Labor-saving technical change reduces demand for labor for given input prices, while labor-using change increases labor demand. Productivity growth for the U.S. economy as a whole will be below long-term historical averages. However, productivity growth in information technology equipment and software will continue to outpace productivity growth in the rest of the economy. The output of the U.S. economy will continue to shift toward industries with high rates of productivity growth. Labor input biases of technical change are substantial in many industries. Labor-using, rather than labor-saving, biases predominate. Labor-using technical change will continue to be a stimulus to the growth of labor demand and differences in the biases for different industries will play an important role in the reallocation of labor. We incorporate the determinants of long-term labor supply and demand into a model of U.S. economic growth. We refer to this model as IGEM1 for Inter-temporal General Equilibrium Model. Markets for labor, capital, and the output of the economy equilibrate through the price system at each point of time. In the labor market, for example, wage rates determine the labor supplied by the current population and the labor demanded by employers in the many sectors of the economy. In the model and the U.S. economy year-to-year changes in the level of economic activity are primarily the consequence of the accumulation of capital. However, over a quarter century the driving forces of economic growth are demography and technology—as encapsulated in the neo-classical theory of economic growth. In IGEM, capital formation is determined by the equilibration of saving and investment. We model household saving at the level of the individual household. Consumption, labor supply, and saving for each household are chosen to maximize a utility function, defined on the stream of future consumption of goods and leisure, subject to an inter-temporal budget constraint. The forward-looking character of savings decisions allows changes in future prices and rates of return to affect current labor supply. The availability of capital input in the U.S. economy is the consequence of past investment. This backward-looking feature of capital accumulation links current markets of capital input to past investment decisions.

Our first and most important conclusion is that future supply and demand for labor in the U.S. economy will be driven by demography and technology. The supply side of the labor market will be dominated by the slowdown in the growth of the working age population, partly offset by continuing increases in the quality of labor input due to rising average levels of educational attainment and experience. From 1960 to 1990 the participation rate of the working age population increased fairly steadily as more women joined men as participants in the labor market. No such increases in labor force participation are in prospect for our projection period 2004–2030. The widely discussed aging of the labor force is reflected in the slowing growth of the working age population, relative to the total population. The working age population will continue to expand more rapidly than the population as a whole and participation rates will decline very slowly. However, the slowdown in the growth of the time endowment will reduce the growth rate of the U.S. economy very substantially. This will be reinforced by the decline in investment and growth of capital input than will accompany slow growth of labor supply. It is important to keep in mind that in the neo-classical theory of economic growth embodied in IGEM, the growth of capital input is endogenous and is equal to the growth of output in the long run.10 Finally, future growth of productivity will remains robust, despite waves of technological pessimism that sometimes accompany cyclical downturns. Rapid changes in technology will continue to be concentrated in the industries that produce information technology equipment and software, led by Electrical Machinery, the industry that includes electronic components like semiconductors. This industry has had very rapid growth of total factor productivity or output per unit of unit, throughout the historical period 1960–2004. We project that this will continue for the next quarter century although the specific form of the underlying changes in technology will undergo the same dramatic evolution as in the recent past. At the level of individual industries the demand for labor depends not only on the growth of output and the substitution of capital input for labor input, but also on the character of technical change. We have emphasized the wide variations in rates of productivity growth among industries. However, labor demand at the industry level is also strongly affected by biases of technical change. We have focused attention in labor-saving and labor-using biases for each of the 35 industries in IGEM. We have assessed the importance of these biases during the historical period 1960–2004 and projected the biases for 2004–2030. Part of the growth of labor input in industries like Instruments, Tobacco, Coal Mining, and Communications will be due to ongoing labor-using biases. In summary, potential growth of the U.S. economy will be slowing considerably and monetary policy will have to adapt to the new environment. The changes we have projected embody many features of the future labor market that are well known to economists and monetary policy-makers—slowing population growth, particularly for the working age population, and declining growth in labor quality. We have quantified these factors by relying on official population projections for the Bureau of the Census and our own estimates of labor quality growth. This has enabled us to characterize the future growth of labor supply with some precision. The future growth of the U.S. economy depends on the contribution of labor input, that is, the growth rate of labor input multiplied by the labor share of output. However, future growth also depends on the rate of growth of total factor productivity and the contribution of capital input. In the neo-classical theory of growth embodied in IGEM, the contribution of capital input, the growth rate of capital input multiplied by the capital share, is endogenous. To a reasonable approximation growth rates of output and capital input must converge in the long run. The only component of the sources of growth not yet accounted for is productivity growth. We have projected future productivity growth on the basis of the historical data on productivity growth constructed by Jorgenson, Ho, Samuels, and Stiroh (2007). We have augmented this description of future changes in technology at the level of individual industries by estimating and projecting labor-saving and labor-using biases of technical change. This enables us to conclude that future productivity growth during the next quarter century will be substantially less than productivity growth during our historical period 1960–2004. This completes our analysis of labor demand and its distribution by industry. Economists and policy-makers, especially in the Federal Reserve System, have made important contributions to our present understanding of the role of technology in the evolution of labor demand and the growth of the U.S. economy.11 The remaining challenge will be to build the new understanding of technology and the sources of economic growth into the framework for the conduct of monetary policy. This new policy framework can be erected on the solid foundation provided by projections of future demographic change. The new framework will be an important addition to the Federal Reserve's highly successful policy structure for understanding and mitigating the impact of the business cycle.