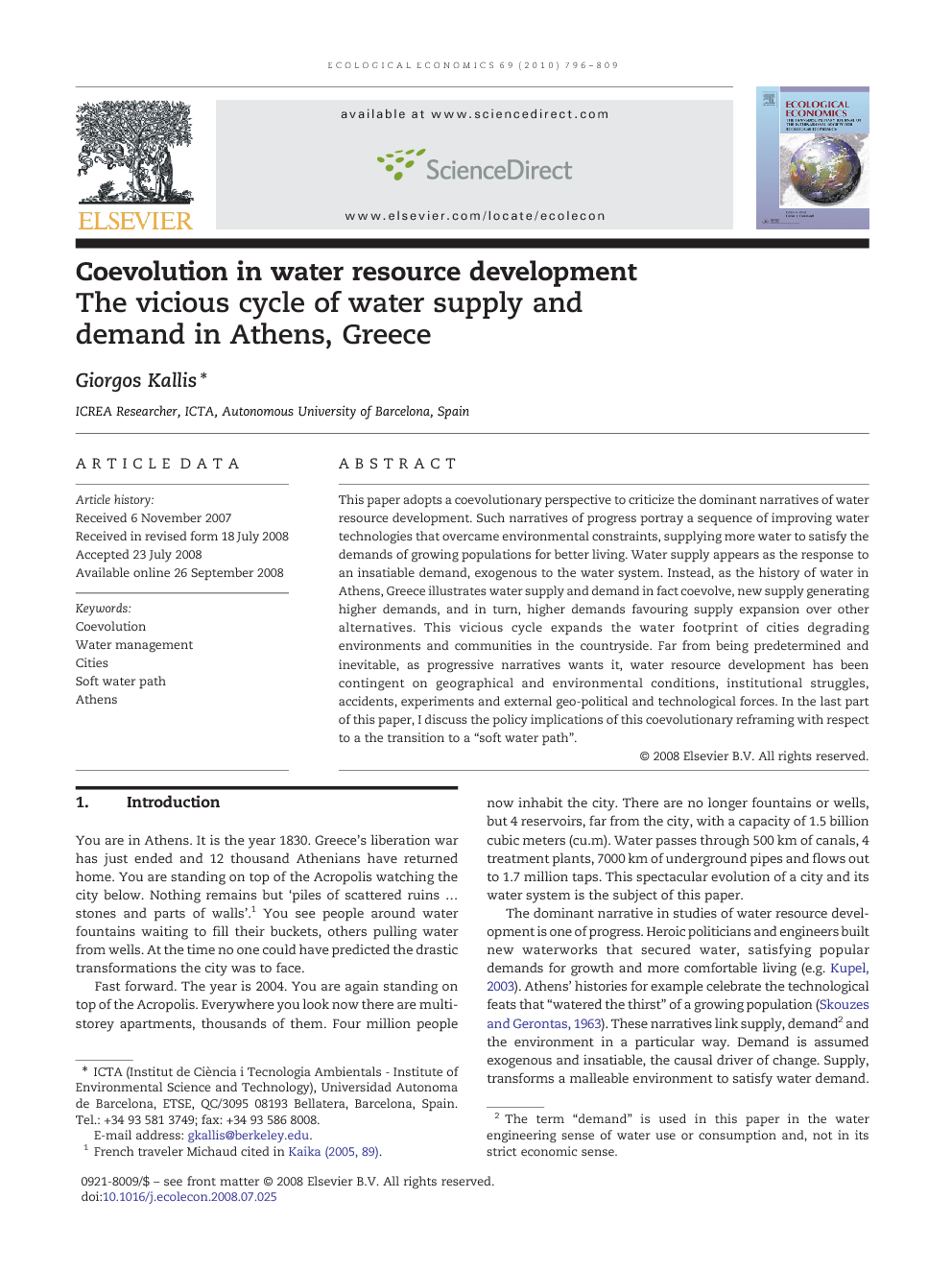 This paper adopts a coevolutionary perspective to criticize the dominant narratives of water resource development. Such narratives of progress portray a sequence of improving water technologies that overcame environmental constraints, supplying more water to satisfy the demands of growing populations for better living. Water supply appears as the response to an insatiable demand, exogenous to the water system. Instead, as the history of water in Athens, Greece illustrates water supply and demand in fact coevolve, new supply generating higher demands, and in turn, higher demands favouring supply expansion over other alternatives. This vicious cycle expands the water footprint of cities degrading environments and communities in the countryside. Far from being predetermined and inevitable, as progressive narratives wants it, water resource development has been contingent on geographical and environmental conditions, institutional struggles, accidents, experiments and external geo-political and technological forces. In the last part of this paper, I discuss the policy implications of this coevolutionary reframing with respect to a the transition to a “soft water path”.

You are in Athens. It is the year 1830. Greece’s liberation war has just ended and 12 thousand Athenians have returned home. You are standing on top of the Acropolis watching the city below. Nothing remains but ‘piles of scattered ruins … stones and parts of walls’.1 You see people around water fountains waiting to fill their buckets, others pulling water from wells. At the time no one could have predicted the drastic transformations the city was to face. Fast forward. The year is 2004. You are again standing on top of the Acropolis. Everywhere you look now there are multi-storey apartments, thousands of them. Four million people now inhabit the city. There are no longer fountains or wells, but 4 reservoirs, far from the city, with a capacity of 1.5 billion cubic meters (cu.m). Water passes through 500 km of canals, 4 treatment plants, 7000 km of underground pipes and flows out to 1.7 million taps. This spectacular evolution of a city and its water system is the subject of this paper. The dominant narrative in studies of water resource development is one of progress. Heroic politicians and engineers built new waterworks that secured water, satisfying popular demands for growth and more comfortable living (e.g. Kupel, 2003). Athens' histories for example celebrate the technological feats that “watered the thirst” of a growing population (Skouzes and Gerontas, 1963). These narratives link supply, demand2 and the environment in a particular way. Demand is assumed exogenous and insatiable, the causal driver of change. Supply, transforms a malleable environment to satisfy water demand. As technologies progress, more and more water is supplied and society is getting better. The narrative of progress has been challenged by many (Norgaard, 1994). Environmentally minded works have highlighted the ecological impacts of water supply and the resource limitations of ever-growing demands (Pearce, 2006, Reisner, 1996 and Postel, 1992). Political economists have reversed causality between supply and demand showing how powerful interests coalesce to see that water availability and related costs do not stand in the way of regional growth and profits. From this perspective, waterworks are built to create demand and growth, not to satisfy it (Walker and Williams, 1981 and Worster, 1985). Institutional economists, historians and political scientists have documented the fierce institutional battles over new values and technologies that condition change in water systems (Righter, 2005, Paavola, 2002, Elkind, 1998 and Platt, 1995). More recently, Marxian political ecologists have described cities and water systems as “hybrid” metabolisms that interweave flows of water, money, technology and ideology. Uneven socio-natures are produced, where some benefit and many loose (Swyngedouw, 2004 and Kaika, 2005). From these and other works, a distinction of three periods in the history of modern urban water supply emerges: i) an early period of private control and limited domestic access to water, with low-scale, local technological solutions (roughly till mid/end-19th century), ii) a period of State or municipal control, large engineering works and universalization of domestic water access, that has been called by Sauri and Del Moral (2001) the “hydraulic paradigm” and linked by Gandy (1997) to the “Fordist period” (roughly mid/end-19th century to 1970s), iii) a contemporary shift to market instruments and integrated management (Gandy, 1997, Bakker, 2003 and Elkind, 1998). The present work is positioned within this rich intellectual context. It seeks to problematize the progressive narrative of water resource development and explore the complex interactions between technologies, institutions and nature, supply and demand, power and distribution through which urban water systems gradually evolve. A time sequence of events, such as those that mark Athens' water history (Fig. 1), lacks a narrative. A narrative needs theory to select important from un-important events and link them causally (Cronon, 1992). The theory of coevolution (Norgaard, 1994) is used here as the glue to bind an alternative narrative. Coevolution “provides a sophisticated explanatory framework which can incorporate a multi-dimensional and cross-disciplinary approach to dealing with complex … change” (Kerr, 2004, 331). Others too have referred before to coevolution in relation to water management but did not develop it beyond a metaphor for interaction between multiple variables (Aguilera-Klink, 2000) or for social adaptation to climate variability (Adger, 1999). The building blocks of a coevolutionary narrative are inter-connectedness and variation. Norgaard (1994) argued that technologies, institutions and values change interdependently and in connection to the bio-physical environment. Beyond “co”, Norgaard also argued that this change is “evolutionary”, i.e. that its constituents parts exhibit variation and that this variation changes over time, increasing by innovation, and decreasing by systematic selection (Nelson, 1995). In social systems, the contextual environment in which various actions (practices, habits) occur sets constraining and enabling principles that exert selective bias in favour of some actions and against others (Kerr, 2004). For example, policy change may be represented in terms of an evolving population of policy ideas that express ideological preferences and are differentially materialized into actions. Selection takes place in political arenas influenced by the relative power of the social interests that support competing ideas (Kerr, 2004). Culture also evolves as the frequency of different ideas or practices in a population changes through mimicry, persuasion or coercion (Runciman, 2005). Norgaard’s model is in effect a meta-framework whereby evolution in each of the policy, cultural and environmental spheres is affecting evolution in the others. In the next section I work with these ideas to construct a coevolutionary narrative of water resource development in cities. Section 3 discusses the methods used for this research and Section 4 narrates the case study. Section 5 concludes with the implications of the coevolutionary narrative.