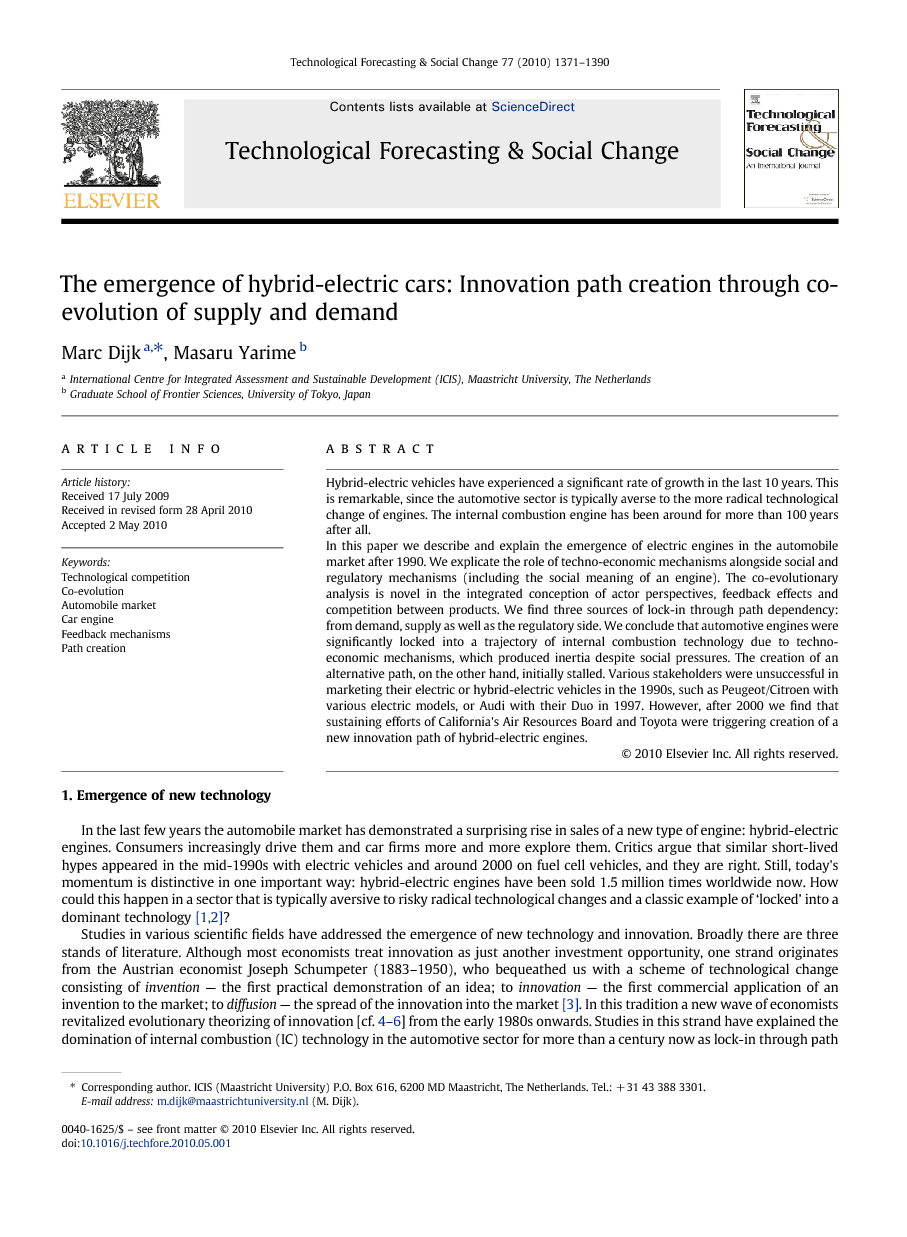 Hybrid-electric vehicles have experienced a significant rate of growth in the last 10 years. This is remarkable, since the automotive sector is typically averse to the more radical technological change of engines. The internal combustion engine has been around for more than 100 years after all. In this paper we describe and explain the emergence of electric engines in the automobile market after 1990. We explicate the role of techno-economic mechanisms alongside social and regulatory mechanisms (including the social meaning of an engine). The co-evolutionary analysis is novel in the integrated conception of actor perspectives, feedback effects and competition between products. We find three sources of lock-in through path dependency: from demand, supply as well as the regulatory side. We conclude that automotive engines were significantly locked into a trajectory of internal combustion technology due to techno-economic mechanisms, which produced inertia despite social pressures. The creation of an alternative path, on the other hand, initially stalled. Various stakeholders were unsuccessful in marketing their electric or hybrid-electric vehicles in the 1990s, such as Peugeot/Citroen with various electric models, or Audi with their Duo in 1997. However, after 2000 we find that sustaining efforts of California's Air Resources Board and Toyota were triggering creation of a new innovation path of hybrid-electric engines.

In this article we describe and explain the emergence of electric engines in the automobile market after 1990. We addressed aggregate level outcomes, such as total sales and technological progress in the sector, both for ICE and for electric engine technology. Furthermore, we examined the perspectives of three key stakeholders: firms, consumers and regulators, and how they changed. We found four key feedback mechanisms which underlie the niche and regime dynamics. We have identified a strong ICE regime over the whole period after 1990: car firms supplied (practically solely) ICEs to meet demand for two large consumer groups: those seeking sufficient performance engines at the lowest price, and those preferring more powerful engines at a slightly higher price. Starting with the pioneering launch of the Prius I (1997), Toyota was effective in addressing the small green consumer segment around the globe with hybrid technology, creating and spurring the hybrid niche trajectory. We can draw a few conclusions from the analysis. First, market niche trajectories need to pass a critical size in order to be viable. PSA was unable to reach a critical size of its electric vehicle activities, despite considerable investments and support from local and national governments (such as a large scale experiment in La Rochelle). The vehicles were broadly regarded as relatively expensive and impractical due to little autonomy. First year sales of HEV were to the order of 10 times higher then first year sales of BEV: about 15.000 vehicles versus about 1.500. Hybrids were appreciated for high fuel economy, similarly practical as ICs and benefitted from the positive social connotation. Somewhere in between these two values may be the critical size for a one-year-old market niche on the automobile market. Second, environmental regulators have hoped for the radical (green) innovation of car engines, but their regulation has mostly stimulated incremental innovation of ICEs, enforcing the lock-in. California's ZEV mandate is an exception, indirectly stimulating R&D on ULEVs. Third, social pressure from civil society (via connotation) does impact the momentum of technology trajectories, though only indirectly. After all, business and technology strategies of car firms are focused on consumers of new cars, not on citizens in general. The extent to which new car consumers are receptive to the social pressure is thus an important factor (hurdle). Further, the influence of social pressure is indirect via a second route, since it provides political support for new regulation, which will subsequently influence technological development. All in all, this paper adds to our understanding of historic and contemporary innovation paths and processes of car propulsion technology. They hint at the large complexities involved in the interaction of emerging niches with established regimes, which makes the predicting of the future paths impossible. The analysis has shown that the positive social connotation of a new technology contributes to counterbalance techno-economic path dependencies, affecting both consumers, producers and, not least, policymakers. For electric and hybrid-electric engines the latter group seems to be essential in order to gain further momentum in the future.