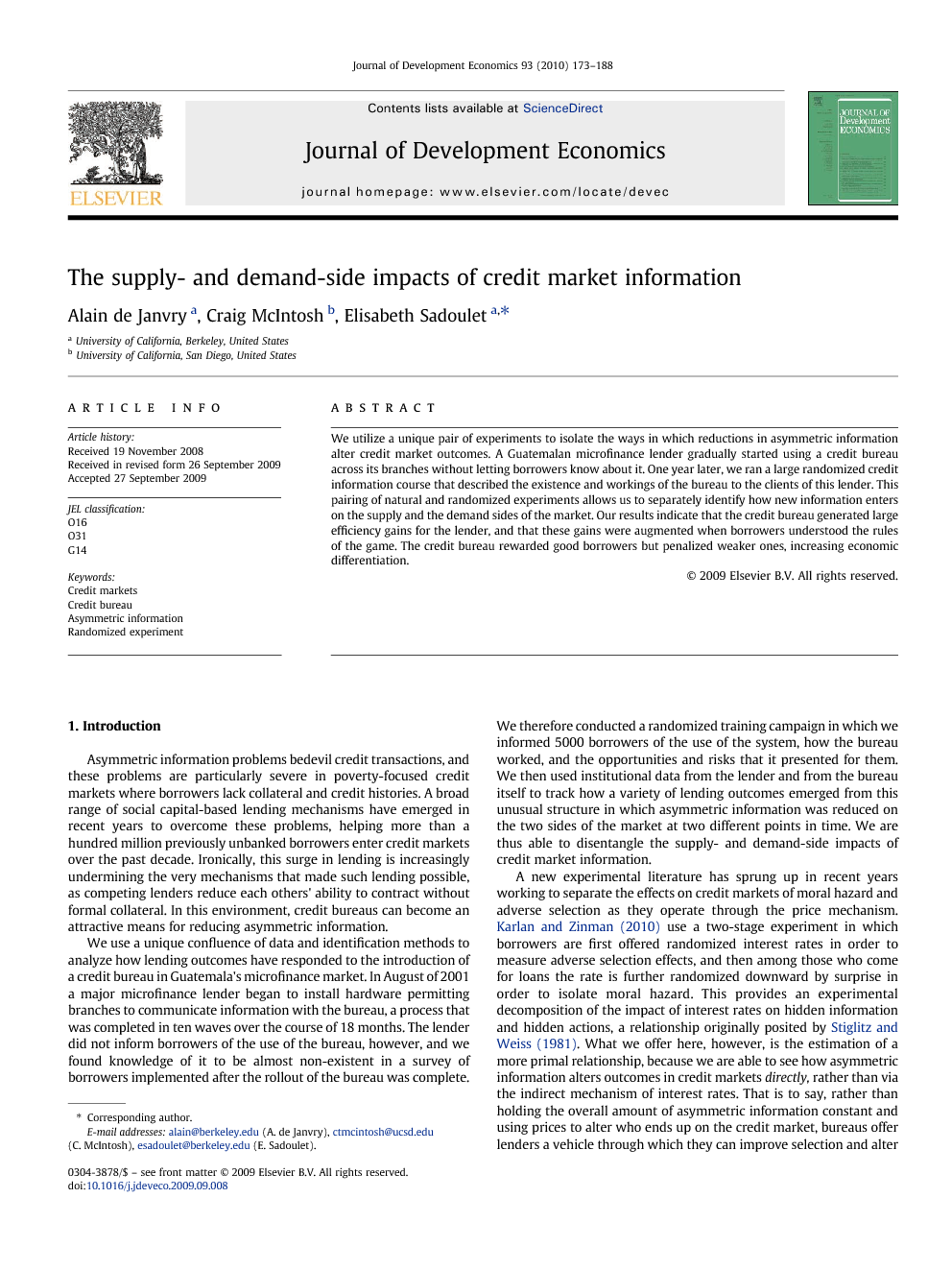 We utilize a unique pair of experiments to isolate the ways in which reductions in asymmetric information alter credit market outcomes. A Guatemalan microfinance lender gradually started using a credit bureau across its branches without letting borrowers know about it. One year later, we ran a large randomized credit information course that described the existence and workings of the bureau to the clients of this lender. This pairing of natural and randomized experiments allows us to separately identify how new information enters on the supply and the demand sides of the market. Our results indicate that the credit bureau generated large efficiency gains for the lender, and that these gains were augmented when borrowers understood the rules of the game. The credit bureau rewarded good borrowers but penalized weaker ones, increasing economic differentiation.

We utilized an unusual pair of experiments which allowed us to decompose the impacts of a new credit bureau into two parts: what happens when a lender observes new information about borrowers, and what happens when borrowers become aware that lenders can observe this new information. We find that the new information in the hands of the lender has stark impacts. There is a large increase in the turnover of the client base, particularly in the 6 months after introduction of the bureau to a branch. Large numbers of individual and SG clients are ejected, and the categories of clients ejected are indeed those with lower average repayment performance (males, more educated borrowers) and larger variance in performance (males). There is a dramatic improvement in the repayment performance of new individual clients and in the size of the loans made to new SG borrowers. The new individual borrowers are better future clients in that they are more likely to take subsequent loans and have faster growth in their borrowing. For Solidarity Group borrowers, the bureau induces a strong swing toward smaller groups and allows the lender to increase loan sizes without causing repayment problems. At the level of the lender, there is a huge increase in employee efficiency, with the average credit officer selecting 63% more new individual borrowers over an average of 6 per month, increasing the number of loans by 27%, and this without any deterioration in portfolio performance. The reduction in adverse selection from improved credit market information therefore presents strong benefits for lenders, generating more clients, larger loan portfolios, and improved repayment. When group borrowers learn of the bureau and what it implies for them, we also see significant impacts on borrowing. Informed Solidarity Groups show an immediate improvement in repayment performance, with a sharp decline in delinquent final payments, solely due to reduction in moral hazard. Subsequent loans also exhibit a sharp decline in delinquency due to reduction both in moral hazard and adverse selection in group formation. There are, by contrast, no impacts of information about the credit bureau on the repayment performance of CB. For SG, there are important group compositional shifts, with a decline in female membership. Female SG members have less delinquent loans, but they have more intermediate repayment problems, which are documented by the credit bureau, to their detriment. Both SG and CB clients use their knowledge of the bureau to start getting access to credit from outside lenders. For CB members, outside loans taken by good clients do not lead to repayment problems. This is not the case for the less experienced clients for whom taking more loans leads to repayment difficulties. Ironically, in several ways the impact of the credit bureau experiment confirms the efficacy of group lending in combating asymmetric information. First, the improvement in the lender's screening ability is larger for individual borrowers than for SG borrowers, indicating that the degree of asymmetric information was lower for group loans to begin with. Solidarity Groups become smaller when bureau information is available, suggesting that the bureau acts as a substitute for information and incentives otherwise provided by larger groups. The trainings have no impact on the inside repayment performance of Communal Bank borrowers, where group incentives should have been the strongest to begin with. And finally, those less experienced CB borrowers who increase their net indebtedness run into repayment problems, indicating that the credit system in the absence of the bureau was providing as much credit as these clients could manage without default. Hence, while our results show that outcomes can be improved with the use of a bureau, they also highlight the value of group lending in enabling lenders to combat asymmetric information. Genesis is a well-respected lender that used standard best practices for MFI loan screening prior to introduction of the bureau. Despite this, our results demonstrate that substantial asymmetric information remained in this market, because the bureau was highly effective at improving credit market outcomes. Since bureaus are a relatively low-cost institutional innovation, this implies that they should be made a part of efforts to achieve financial deepening in developing countries. Their use appears to be clearly to the benefit of lenders, and in a competitive market, this should lead to lower interest rates for borrowers over time. The losers from the introduction of a bureau are those borrowers who are screened out as a result of the information, and ongoing borrowers who may lose insurance opportunities as a result of the decline in solidarity group size. We show that group reporting can in fact reinforce the group mechanisms that underlie microfinance lending. The ultimate outcome is efficiency gains for the innovating institution, gains for the more capable borrowers, and increased economic differentiation across agents.