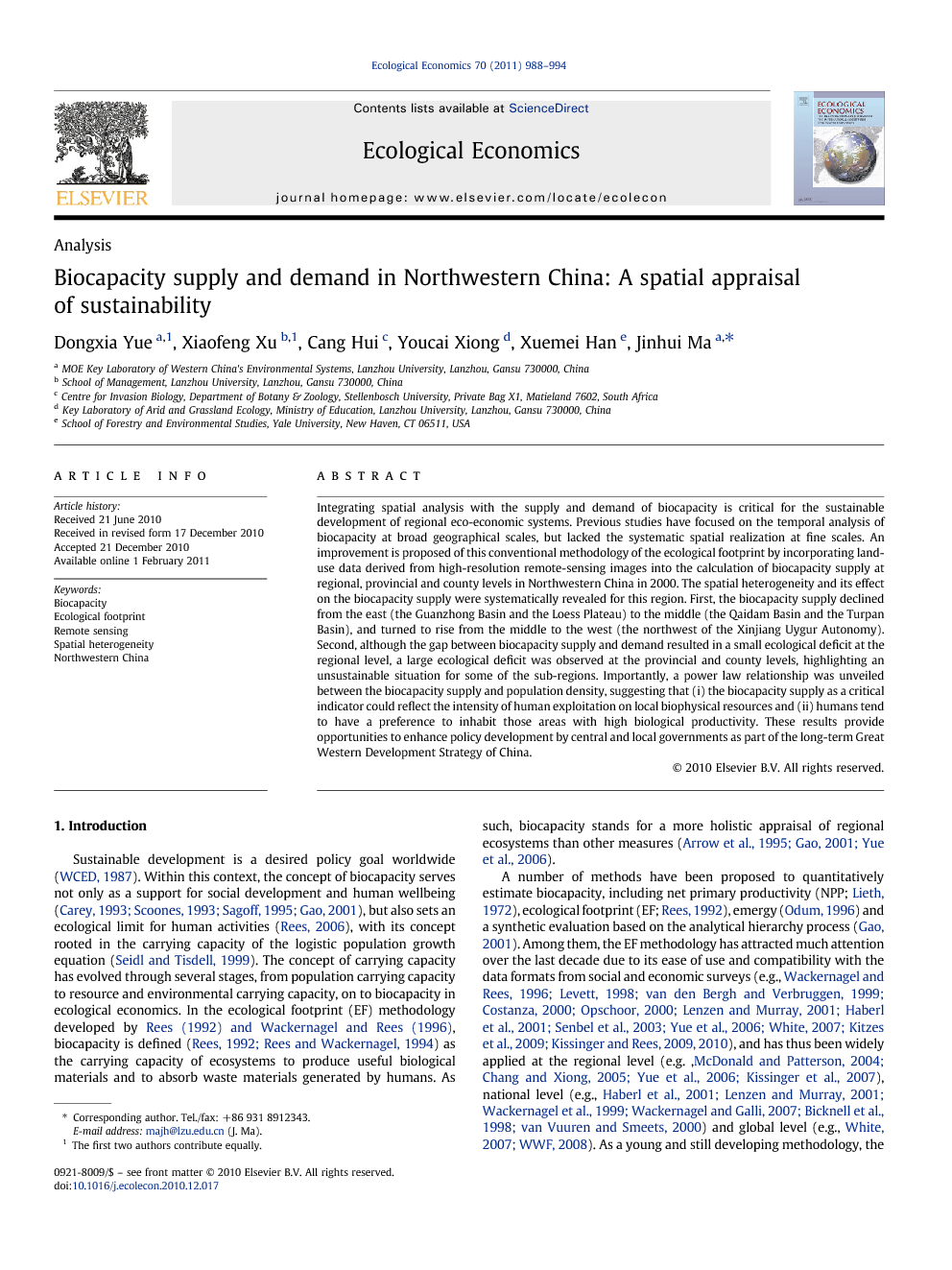 Integrating spatial analysis with the supply and demand of biocapacity is critical for the sustainable development of regional eco-economic systems. Previous studies have focused on the temporal analysis of biocapacity at broad geographical scales, but lacked the systematic spatial realization at fine scales. An improvement is proposed of this conventional methodology of the ecological footprint by incorporating land-use data derived from high-resolution remote-sensing images into the calculation of biocapacity supply at regional, provincial and county levels in Northwestern China in 2000. The spatial heterogeneity and its effect on the biocapacity supply were systematically revealed for this region. First, the biocapacity supply declined from the east (the Guanzhong Basin and the Loess Plateau) to the middle (the Qaidam Basin and the Turpan Basin), and turned to rise from the middle to the west (the northwest of the Xinjiang Uygur Autonomy). Second, although the gap between biocapacity supply and demand resulted in a small ecological deficit at the regional level, a large ecological deficit was observed at the provincial and county levels, highlighting an unsustainable situation for some of the sub-regions. Importantly, a power law relationship was unveiled between the biocapacity supply and population density, suggesting that (i) the biocapacity supply as a critical indicator could reflect the intensity of human exploitation on local biophysical resources and (ii) humans tend to have a preference to inhabit those areas with high biological productivity. These results provide opportunities to enhance policy development by central and local governments as part of the long-term Great Western Development Strategy of China.

Sustainable development is a desired policy goal worldwide (WCED, 1987). Within this context, the concept of biocapacity serves not only as a support for social development and human wellbeing (Carey, 1993, Scoones, 1993, Sagoff, 1995 and Gao, 2001), but also sets an ecological limit for human activities (Rees, 2006), with its concept rooted in the carrying capacity of the logistic population growth equation (Seidl and Tisdell, 1999). The concept of carrying capacity has evolved through several stages, from population carrying capacity to resource and environmental carrying capacity, on to biocapacity in ecological economics. In the ecological footprint (EF) methodology developed by Rees, 1992 and Wackernagel and Rees, 1996, biocapacity is defined (Rees, 1992 and Rees and Wackernagel, 1994) as the carrying capacity of ecosystems to produce useful biological materials and to absorb waste materials generated by humans. As such, biocapacity stands for a more holistic appraisal of regional ecosystems than other measures (Arrow et al., 1995, Gao, 2001 and Yue et al., 2006). A number of methods have been proposed to quantitatively estimate biocapacity, including net primary productivity (NPP; Lieth, 1972), ecological footprint (EF; Rees, 1992), emergy (Odum, 1996) and a synthetic evaluation based on the analytical hierarchy process (Gao, 2001). Among them, the EF methodology has attracted much attention over the last decade due to its ease of use and compatibility with the data formats from social and economic surveys (e.g., Wackernagel and Rees, 1996, Levett, 1998, van den Bergh and Verbruggen, 1999, Costanza, 2000, Opschoor, 2000, Lenzen and Murray, 2001, Haberl et al., 2001, Senbel et al., 2003, Yue et al., 2006, White, 2007, Kitzes et al., 2009, Kissinger and Rees, 2009 and Kissinger and Rees, 2010), and has thus been widely applied at the regional level (e.g. ,McDonald and Patterson, 2004, Chang and Xiong, 2005, Yue et al., 2006 and Kissinger et al., 2007), national level (e.g., Haberl et al., 2001, Lenzen and Murray, 2001, Wackernagel et al., 1999, Wackernagel and Galli, 2007, Bicknell et al., 1998 and van Vuuren and Smeets, 2000) and global level (e.g., White, 2007 and WWF (World Wide Fund for Nature) International et al., 2008). As a young and still developing methodology, the EF calculation requires more integrating design to represent the relationship between humanity and nature (Rees, 2000, Wackernagel and Yount, 2002 and WWF (World Wide Fund for Nature) International et al., 2006), and the inclusion of spatial structure is thought to meet this requirement, especially with the introduction of the geographic information system (GIS) into the solution (e.g., Wood, 2003, Chang and Xiong, 2005 and Yue et al., 2006). In a standard EF study, biocapacity is often measured by the available area of biologically productive land and water based on data reported in national or regional statistics. A drawback of this methodology is that data often excludes the spatial information of the EF and biocapacity as well as the spatial heterogeneity of natural capital and land use (Erb, 2004). Furthermore, national and regional statistics are often reported at a coarse resolution for political use and may not be applicable for biocapacity assessment at the level of precision required to inform policy making at regional scales (Mayer, 2008 and Chang and Xiong, 2005). Concerns over the effect of these blind spots on the spatial assessment of sustainability continue to battle researchers (van den Bergh and Verbruggen, 1999, Opschoor, 2000 and Templet, 2000), and an improved methodology that can address these shortfalls is needed (Luck et al., 2001, Jenerette et al., 2006 and Kitzes et al., 2009). In this regard, GIS models have been strongly recommended for their ability to provide better estimates than spatially implicit estimates (Kitzes et al., 2009). Therefore, it is possible to use remote-sensing data of land use combined with the spatial analysis techniques in GIS to calculate a spatially explicit biocapacity at both coarse and fine scales, as demonstrated by a few case studies (e.g., Chang and Xiong, 2005, Heumann and Moran, 2006 and Moran et al., 2009). Since 1999, the Great Western Development Strategy of China has been a national policy to ease the national imbalance of economic and social developments, with special focus on the less developed western regions. The implementation of this strategy, together with the ensuing population and economic growth in the region, has caused the impact of human activities on water and land resources to escalate, posing threats not only to the ecosystem, but also to national security. We therefore select Northwestern China (NWC) as a study area for a quantitative and spatial appraisal of the supply and demand of biocapacity. Specifically, we present a quantitative assessment of the spatially explicit biocapacity demand and supply of NWC (covering some 3 × 106 km2, and containing 5 provinces and 358 counties) at multiple spatial scales, using a combination of techniques from the EF methodology and the spatial analysis in GIS. A series of indices of biocapacity are developed to reflect the integrated status of ecological sustainability at different spatial scales. This study thus refines the current EF methodology and emphasizes the spatial heterogeneity of the regional biocapacity.