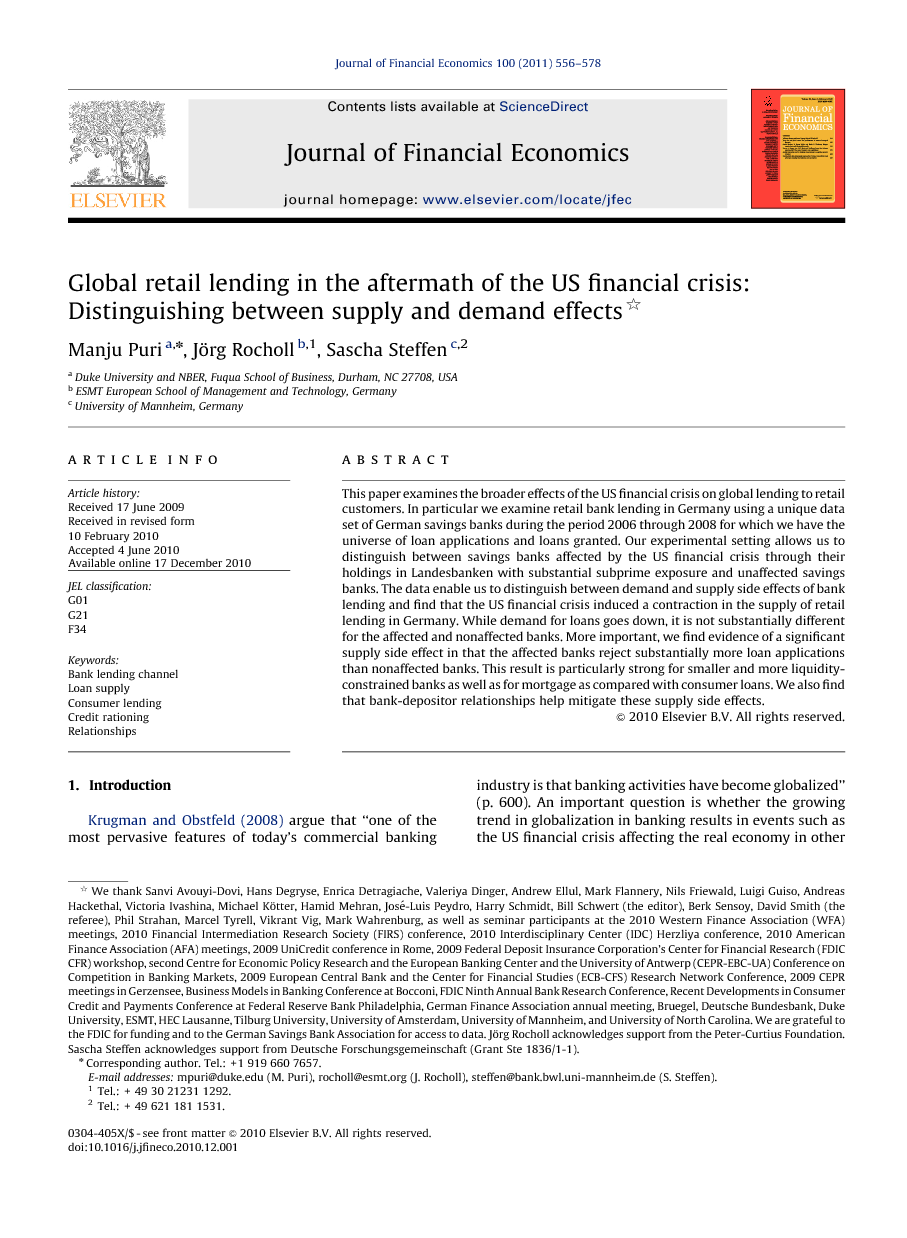 This paper examines the broader effects of the US financial crisis on global lending to retail customers. In particular we examine retail bank lending in Germany using a unique data set of German savings banks during the period 2006 through 2008 for which we have the universe of loan applications and loans granted. Our experimental setting allows us to distinguish between savings banks affected by the US financial crisis through their holdings in Landesbanken with substantial subprime exposure and unaffected savings banks. The data enable us to distinguish between demand and supply side effects of bank lending and find that the US financial crisis induced a contraction in the supply of retail lending in Germany. While demand for loans goes down, it is not substantially different for the affected and nonaffected banks. More important, we find evidence of a significant supply side effect in that the affected banks reject substantially more loan applications than nonaffected banks. This result is particularly strong for smaller and more liquidity-constrained banks as well as for mortgage as compared with consumer loans. We also find that bank-depositor relationships help mitigate these supply side effects.

In this paper we take advantage of a unique data set to study the real effects of the financial crisis through the global supply of credit. We have the universe of loan applications and loan approvals for German savings banks in a time period that spans the financial crisis. We have a unique experimental setting in that some of our local savings banks, while they engage in narrow banking, are substantially affected by the US financial crisis through the Landesbanken that they own, which in turn have substantial exposure to subprime assets in the United States. We can compare their lending patterns with savings banks that do not have similar exposure. Using data from 2006–2008 (pre- and post-crisis) we are also able to distinguish between demand and supply effects of the financial crisis. While there is an overall decrease in demand of loan applications once the crisis strikes, we do not find significant differences in the loan applications for affected versus nonaffected banks. We find evidence of a substantial supply effect in bank credit to retail customers. Using a difference-in-differences analysis we find that the affected savings banks reject more loan applications than the nonaffected banks. These results survive a large number of robustness checks. We also find that savings banks curtail their lending in particular when they are small and more liquidity-constrained. In addition, there is a bigger effect for mortgages as compared with consumer loans and a slight migration to quality. However, the distribution of ex ante borrower and portfolio risk for affected and nonaffected banks before and after the onset of the financial crisis is not statistically significantly different. Our evidence thus suggests that banks cut back on lending to preserve liquidity. Finally, we assess the effect of bank-depositor relationships and find that relationships help mitigate the supply side effect. Our findings illustrate the global linkages for the supply of credit and suggest a number of avenues for future research and policy makers. A key aspect is whether and to what extent the reduced supply of credit in some regions affects the real economy in these regions, e.g., through a reduction of consumer spending or a reduction in construction. Related to this, it is important to understand from a policy perspective how the supply of credit can be secured even if certain banks are affected by a financial crisis.