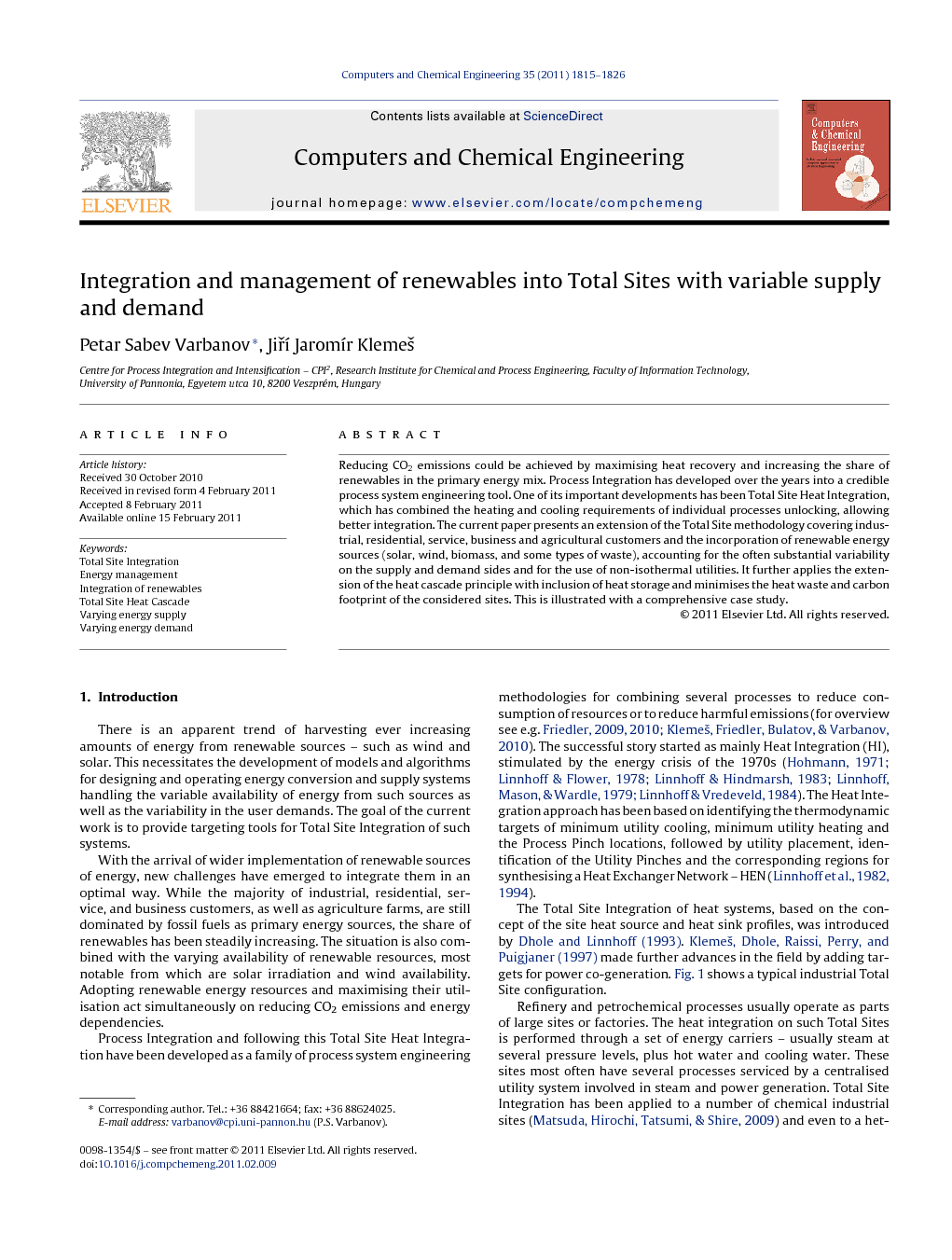 Reducing CO2 emissions could be achieved by maximising heat recovery and increasing the share of renewables in the primary energy mix. Process Integration has developed over the years into a credible process system engineering tool. One of its important developments has been Total Site Heat Integration, which has combined the heating and cooling requirements of individual processes unlocking, allowing better integration. The current paper presents an extension of the Total Site methodology covering industrial, residential, service, business and agricultural customers and the incorporation of renewable energy sources (solar, wind, biomass, and some types of waste), accounting for the often substantial variability on the supply and demand sides and for the use of non-isothermal utilities. It further applies the extension of the heat cascade principle with inclusion of heat storage and minimises the heat waste and carbon footprint of the considered sites. This is illustrated with a comprehensive case study.

There is an apparent trend of harvesting ever increasing amounts of energy from renewable sources – such as wind and solar. This necessitates the development of models and algorithms for designing and operating energy conversion and supply systems handling the variable availability of energy from such sources as well as the variability in the user demands. The goal of the current work is to provide targeting tools for Total Site Integration of such systems. With the arrival of wider implementation of renewable sources of energy, new challenges have emerged to integrate them in an optimal way. While the majority of industrial, residential, service, and business customers, as well as agriculture farms, are still dominated by fossil fuels as primary energy sources, the share of renewables has been steadily increasing. The situation is also combined with the varying availability of renewable resources, most notable from which are solar irradiation and wind availability. Adopting renewable energy resources and maximising their utilisation act simultaneously on reducing CO2 emissions and energy dependencies. Process Integration and following this Total Site Heat Integration have been developed as a family of process system engineering methodologies for combining several processes to reduce consumption of resources or to reduce harmful emissions (for overview see e.g. Friedler, 2009, Friedler, 2010 and Klemeš et al., 2010). The successful story started as mainly Heat Integration (HI), stimulated by the energy crisis of the 1970s (Hohmann, 1971, Linnhoff and Flower, 1978, Linnhoff and Hindmarsh, 1983, Linnhoff et al., 1979 and Linnhoff and Vredeveld, 1984). The Heat Integration approach has been based on identifying the thermodynamic targets of minimum utility cooling, minimum utility heating and the Process Pinch locations, followed by utility placement, identification of the Utility Pinches and the corresponding regions for synthesising a Heat Exchanger Network – HEN (Linnhoff et al., 1982, 1994). The Total Site Integration of heat systems, based on the concept of the site heat source and heat sink profiles, was introduced by Dhole and Linnhoff (1993). Klemeš, Dhole, Raissi, Perry, and Puigjaner (1997) made further advances in the field by adding targets for power co-generation. Fig. 1 shows a typical industrial Total Site configuration. Refinery and petrochemical processes usually operate as parts of large sites or factories. The heat integration on such Total Sites is performed through a set of energy carriers – usually steam at several pressure levels, plus hot water and cooling water. These sites most often have several processes serviced by a centralised utility system involved in steam and power generation. Total Site Integration has been applied to a number of chemical industrial sites (Matsuda, Hirochi, Tatsumi, & Shire, 2009) and even to a heterogeneous Total Site involving a brewery and several commercial energy users. It has also been used as the targeting stage for the synthesis of utility systems (Shang and Kokossis, 2004 and Varbanov et al., 2005). Renewable resources are usually available on smaller scale distributed over a given area. Their availability (with the exception of biomass) is usually well below 100%. The resource availability varies significantly with time and location. This is caused by the changing weather and geographic conditions. The energy demands (heating, cooling, and power) of the considered sites vary significantly with time of the day and period of the year. The variations of the renewable supplies and the demands are partly predictable and some are changing in very regular time intervals – day and night for solar energy, for instance. However, the availability of other renewables, such as wind generated energy, can be less predictable. As a result, optimising the design of energy conversion systems using renewable resources is more complex than when using just fossil fuels. One option to smooth the inherent variations and satisfy the demands at high efficiency is to combine the supply and demand streams of the individual users in larger systems as the Total Sites. Such systems may serve industrial plants as well as residential customers and the service sector. This type of extension has been developed by Perry, Klemeš, and Bulatov (2008) who added residential and service-building processes (hospitals, hotels, offices) to the traditional scope of Total Sites, allowing low-grade industrial heat, waste to heat, and renewables to be utilised. This conceptual extension allows applying the Total Site Integration strategy to local communities involving a larger number of smaller-scale entities and is referred to as Locally Integrated Energy Sector. In terms of energy management for demand/supply variations, a basic methodology has been developed previously for Heat Integration of batch processes: Time Slice and Time Average Composite Curves (Kemp and Deakin, 1989a, Kemp and Deakin, 1989b, Kemp and Deakin, 1989c and Klemeš et al., 1994). This methodology has been recently revisited by Foo, Chew, and Lee (2008). From the above analysis the need is identified for a novel methodology combining a number of features from previous works and adding new features and extending the scope: • It is necessary to cater for a more diverse set of energy users. The most notable additional customers are small industrial plants, residential, commercial and service buildings, as well as potentially farm complexes. • Integration of renewables is of strategic importance for reducing CO2 emissions and external energy dependence. • It is vital to also account for the variations in the energy supplies and demands. A number of tools are needed, all centred on the use of heat storage. • A uniform framework for modelling the site heat sources and sinks, combined with heat storage and non-isothermal utilities is needed.

It has been shown that applying Total Site Heat Integrated storage can significantly reduce the targets for fossil-fuel as well as solar-based utilities. The methodology based on an extension of the previously developed Total Site Integration has got a very good potential to considerably improve the integration of renewables with time varying availability. The methodology can be used for simultaneously obtaining several important targets for Total Sites integrating renewables. These are the maximum amounts (upper bound) of renewable capture, the minimum consumption (lower bound) of fossil fuels, and the maximum capacity (upper bound) of energy storage. The identified targets can be further used for more detailed system design. One of the previous simplifying assumptions – fixed energy demand – has been relaxed as well. The demonstration case study has proven the potential for the savings and illustrated the usefulness of the newly developed Total Site Heat Cascade as a tool for seeking energy efficiency improvement by demand-side management of the process energy demands. This has been a step to the further development of the Total Site methodology. However, there are still many further steps to follow. The full optimisation of heat storages is one of them, but also the adequate accounting for the heat deterioration during the storage. To include the energy losses and account for the capital and running costs of Total Site Integration are other important issues. Lay-outs and altitude levels of the various facilities should be accounted for as well. And perhaps the most important issue is to extend the scope of analysed energy forms – to move from the heat integration into the other energy sources and carriers.