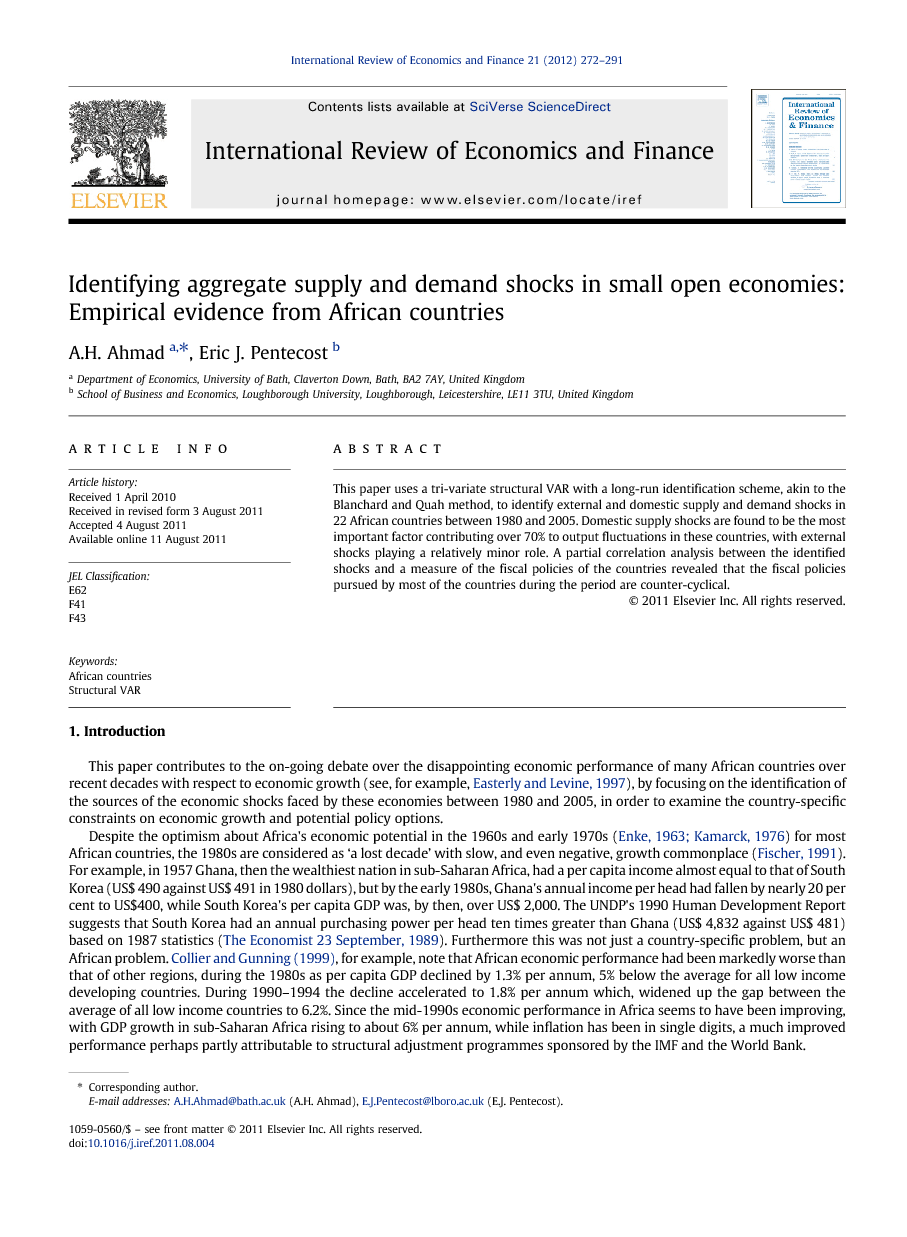 This paper uses a tri-variate structural VAR with a long-run identification scheme, akin to the Blanchard and Quah method, to identify external and domestic supply and demand shocks in 22 African countries between 1980 and 2005. Domestic supply shocks are found to be the most important factor contributing over 70% to output fluctuations in these countries, with external shocks playing a relatively minor role. A partial correlation analysis between the identified shocks and a measure of the fiscal policies of the countries revealed that the fiscal policies pursued by most of the countries during the period are counter-cyclical.

This paper contributes to the on-going debate over the disappointing economic performance of many African countries over recent decades with respect to economic growth (see, for example, Easterly and Levine, 1997), by focusing on the identification of the sources of the economic shocks faced by these economies between 1980 and 2005, in order to examine the country-specific constraints on economic growth and potential policy options. Despite the optimism about Africa's economic potential in the 1960s and early 1970s (Enke, 1963 and Kamarck, 1976) for most African countries, the 1980s are considered as ‘a lost decade’ with slow, and even negative, growth commonplace (Fischer, 1991). For example, in 1957 Ghana, then the wealthiest nation in sub-Saharan Africa, had a per capita income almost equal to that of South Korea (US$ 490 against US$ 491 in 1980 dollars), but by the early 1980s, Ghana's annual income per head had fallen by nearly 20 per cent to US$400, while South Korea's per capita GDP was, by then, over US$ 2,000. The UNDP's 1990 Human Development Report suggests that South Korea had an annual purchasing power per head ten times greater than Ghana (US$ 4,832 against US$ 481) based on 1987 statistics (The Economist 23 September, 1989). Furthermore this was not just a country-specific problem, but an African problem. Collier and Gunning (1999), for example, note that African economic performance had been markedly worse than that of other regions, during the 1980s as per capita GDP declined by 1.3% per annum, 5% below the average for all low income developing countries. During 1990–1994 the decline accelerated to 1.8% per annum which, widened up the gap between the average of all low income countries to 6.2%. Since the mid-1990s economic performance in Africa seems to have been improving, with GDP growth in sub-Saharan Africa rising to about 6% per annum, while inflation has been in single digits, a much improved performance perhaps partly attributable to structural adjustment programmes sponsored by the IMF and the World Bank. To identify the potential economic shocks faced by the African countries since 1980 we undertake a tri-variate VAR analysis, following Dungey and Pagan (2000). For small open economies, like those in Africa, where external shocks are likely to be at least as important as domestic shocks in influencing the evolution of output growth and inflation, the tri-variate VAR is preferred to Blanchard and Quah's (1989) more usual bi-variate VAR. In this framework in addition to domestic output growth and inflation, world output growth is also included in the model. This variable is assumed to be an important exogenous determinant of individual country exports, and therefore fluctuations in world output growth are likely to have significant effects on domestic output growth and inflation. A second contribution to the existing literature is to identify the contribution of national fiscal policies by a partial correlation analysis between the estimated shocks and a measure of fiscal policies of the countries studied. The rest of the paper is organised as follows. The next section discusses the identification of aggregate supply and demand shocks within a structural VAR. Section 3 analyses the data from our sample of 22 African countries and the results from the trivariate-VAR analysis. Section 4 concludes.

This paper has investigated the effects of external, demand and supply shocks on output growth and inflation in 22 African countries. On the whole, domestic supply shocks are by far the most important of the shocks in accounting for between 70% and 95% of movements in domestic output. This finding may suggest that economic policies that aim at alleviating country-specific supply-side constraints would most likely help in raising the economies' rate of economic growth. Foreign supply shocks have produced positive and significant output responses in Botswana, Egypt, Gabon, and Tunisia, perhaps reflecting the importance of solid minerals in these countries’ exports. Domestic demand shocks did not produce any significant response in real output, except in Senegal and Benin, although inflation did respond positively to the demand shocks in almost all the countries. Finally, a partial correlation analysis between domestic supply and demand shocks and government consumption, used as a measure of the countries' fiscal stance, indicated that fiscal policy undertaken by these countries during the sample period was primarily counter-cyclical, and that extra output produced as a result of a positive supply shock was largely absorbed by the public sector.