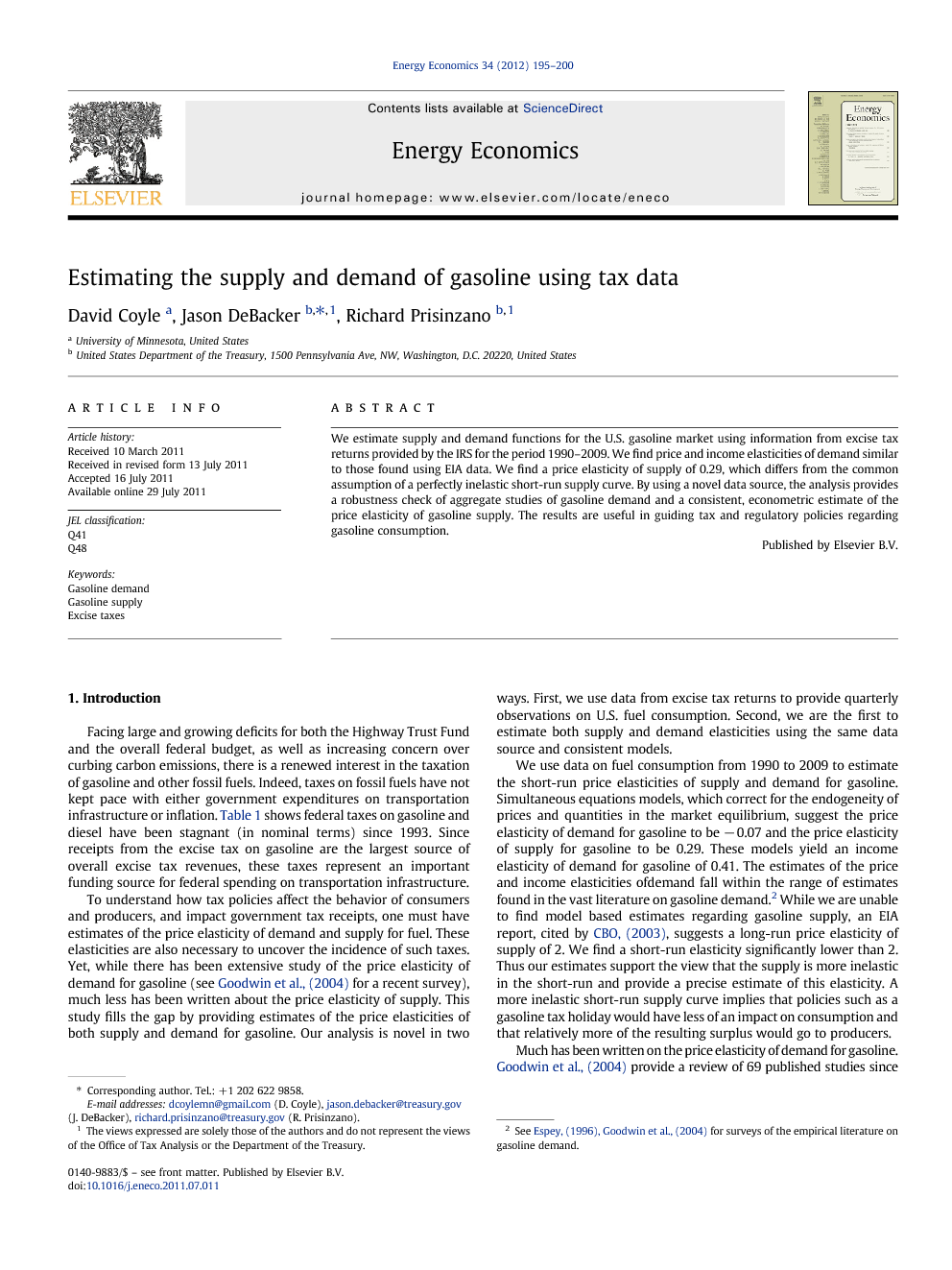 We estimate supply and demand functions for the U.S. gasoline market using information from excise tax returns provided by the IRS for the period 1990–2009. We find price and income elasticities of demand similar to those found using EIA data. We find a price elasticity of supply of 0.29, which differs from the common assumption of a perfectly inelastic short-run supply curve. By using a novel data source, the analysis provides a robustness check of aggregate studies of gasoline demand and a consistent, econometric estimate of the price elasticity of gasoline supply. The results are useful in guiding tax and regulatory policies regarding gasoline consumption.

We estimate the supply and demand for gasoline using data provided by the IRS. We find demand elasticities (price and income) in-line with the existing literature. We find a price elasticity of supply of 0.29, which differs from the common assumption of a perfectly inelastic short-run supply curve. In doing so, we provide a robustness check on aggregate studies of gasoline demand and a consistent, econometric estimate of the price elasticity of gasoline supply. These results will be useful in light of current and future debate on tax and regulatory policies regarding gasoline consumption. In December of 2010, the Obama administration's National Commission on Fiscal Responsibility and Reform released a plan to achieve roughly $4 trillion in deficit reduction through 2020. Part of the plan includes gradually increasing the federal gas tax by 15 cents per gallon between 2013 and 2015 and dedicating the increase to the Transportation Trust Fund (which is proposed to replace the Highway Trust Fund). This increase, combined with proposed spending limits for the Fund, would in turn assist in deficit reduction by alleviating the need for continued bailouts of the Fund through deficit spending. The low elasticities of supply and demand for gasoline found in this paper suggest that, at least in the short-run, raising fuel taxes will generate significant amounts of revenue with relatively low efficiency costs. Given these results, and the historic recent deficits for both the Highway Trust Fund and the overall federal budget, policymakers should give careful consideration to the Commission's recommendation of increasing the federal gas tax. In addition to raising revenue and reducing deficits, many have made an argument for increasing fuel taxes for environmental purposes. Hsing, 1994 and Morrow et al., March 2010, and several others have found fuel taxes to be effective mechanism for reducing gasoline consumption and in turn carbon emissions. The elasticities found in this paper indicate that consumption of gasoline and resulting carbon emissions will be largely unaffected by marginal fuel tax increases, at least in the short-run. Finally, while not a micro-econometric study like West, (2004), (West and Williams, May, 2004), and (Wadud et al., (2010), by providing a short-run supply elasticity our study is able to provide greater insight into fuel tax incidence. While the entire statutory burden of fuel taxes fall on suppliers, the economic burden for consumers can be found by dividing the price elasticity of supply by the difference of the price elasticity of supply and the price elasticity of demand. Using our result of 0.07 for the price elasticity of demand and 0.28 for the price elasticity of supply, we find that in the short-run 80% of a fuel tax increase would fall on consumers.