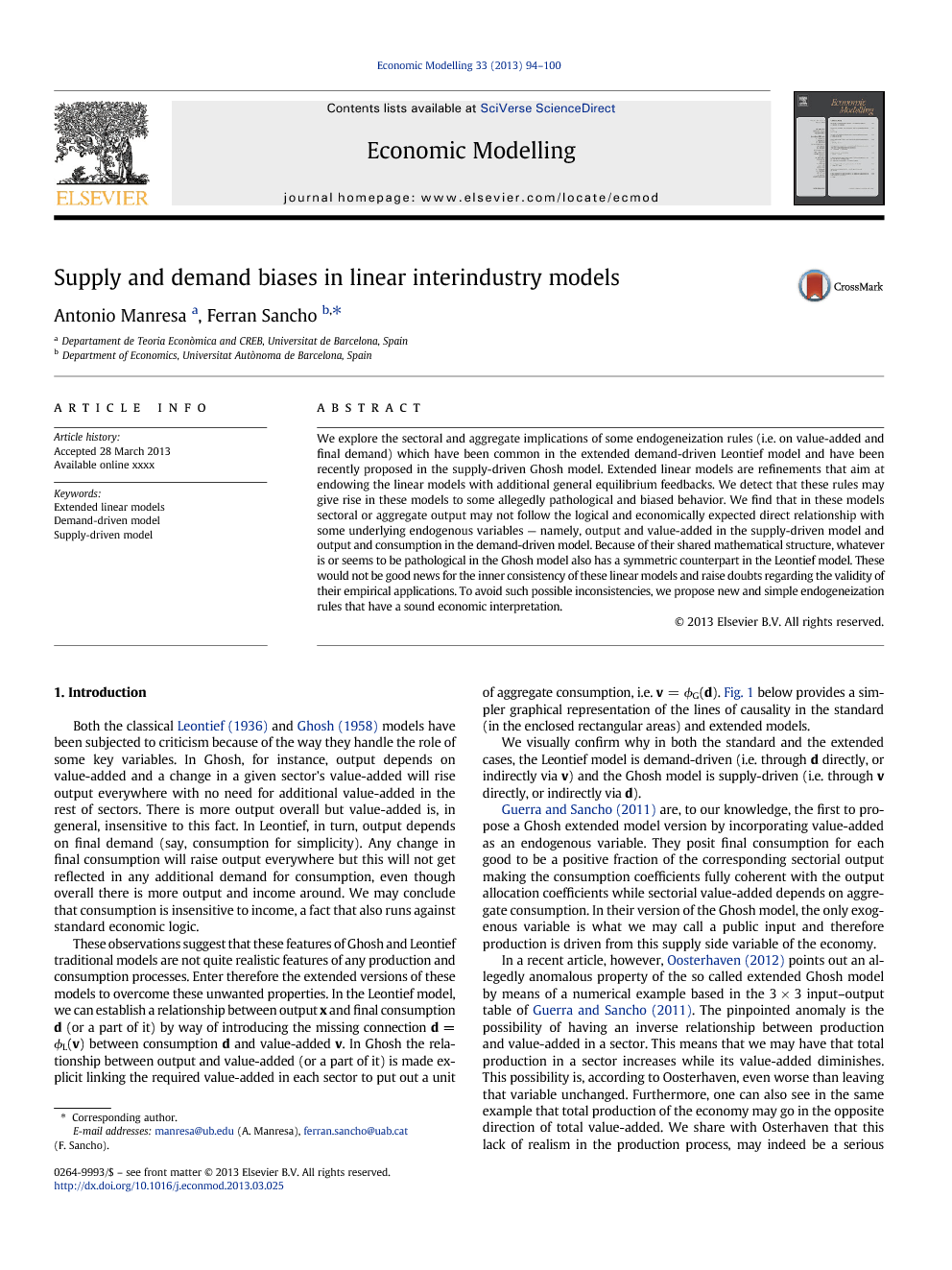 We explore the sectoral and aggregate implications of some endogeneization rules (i.e. on value-added and final demand) which have been common in the extended demand-driven Leontief model and have been recently proposed in the supply-driven Ghosh model. Extended linear models are refinements that aim at endowing the linear models with additional general equilibrium feedbacks. We detect that these rules may give rise in these models to some allegedly pathological and biased behavior. We find that in these models sectoral or aggregate output may not follow the logical and economically expected direct relationship with some underlying endogenous variables — namely, output and value-added in the supply-driven model and output and consumption in the demand-driven model. Because of their shared mathematical structure, whatever is or seems to be pathological in the Ghosh model also has a symmetric counterpart in the Leontief model. These would not be good news for the inner consistency of these linear models and raise doubts regarding the validity of their empirical applications. To avoid such possible inconsistencies, we propose new and simple endogeneization rules that have a sound economic interpretation.

Both the classical Leontief (1936) and Ghosh (1958) models have been subjected to criticism because of the way they handle the role of some key variables. In Ghosh, for instance, output depends on value-added and a change in a given sector's value-added will rise output everywhere with no need for additional value-added in the rest of sectors. There is more output overall but value-added is, in general, insensitive to this fact. In Leontief, in turn, output depends on final demand (say, consumption for simplicity). Any change in final consumption will raise output everywhere but this will not get reflected in any additional demand for consumption, even though overall there is more output and income around. We may conclude that consumption is insensitive to income, a fact that also runs against standard economic logic. These observations suggest that these features of Ghosh and Leontief traditional models are not quite realistic features of any production and consumption processes. Enter therefore the extended versions of these models to overcome these unwanted properties. In the Leontief model, we can establish a relationship between output x and final consumption d (or a part of it) by way of introducing the missing connection d = ϕL(v) between consumption d and value-added v. In Ghosh the relationship between output and value-added (or a part of it) is made explicit linking the required value-added in each sector to put out a unit of aggregate consumption, i.e. v = ϕG(d). Fig. 1 below provides a simpler graphical representation of the lines of causality in the standard (in the enclosed rectangular areas) and extended models. We visually confirm why in both the standard and the extended cases, the Leontief model is demand-driven (i.e. through d directly, or indirectly via v) and the Ghosh model is supply-driven (i.e. through v directly, or indirectly via d). Guerra and Sancho (2011) are, to our knowledge, the first to propose a Ghosh extended model version by incorporating value-added as an endogenous variable. They posit final consumption for each good to be a positive fraction of the corresponding sectorial output making the consumption coefficients fully coherent with the output allocation coefficients while sectorial value-added depends on aggregate consumption. In their version of the Ghosh model, the only exogenous variable is what we may call a public input and therefore production is driven from this supply side variable of the economy. In a recent article, however, Oosterhaven (2012) points out an allegedly anomalous property of the so called extended Ghosh model by means of a numerical example based in the 3 × 3 input–output table of Guerra and Sancho (2011). The pinpointed anomaly is the possibility of having an inverse relationship between production and value-added in a sector. This means that we may have that total production in a sector increases while its value-added diminishes. This possibility is, according to Oosterhaven, even worse than leaving that variable unchanged. Furthermore, one can also see in the same example that total production of the economy may go in the opposite direction of total value-added. We share with Osterhaven that this lack of realism in the production process, may indeed be a serious criticism for any model thus built. Furthermore, this author also shows, by some numerical examples, that such an undesirable property no longer applies to the demand-driven Leontief extended model. The main purpose of this paper is to discuss the logic and structure of these unwanted and anomalous properties — going beyond results based only on numerical examples. We do so by way of analyzing the general and explicit solutions of the equilibrium values of both the Ghosh and Leontief extended models in a 2 × 2 scenario, which is sufficient to identify and characterize the main issues. Since both linear models share the same mathematical structure, whatever property – good or bad – of the Ghosh model may have, we find a precise and formal counterpart in the Leontief model. Unfortunately, what we find is that the aforementioned unwanted properties of the extended Ghosh model, i.e. the pathological behavior of a negative relationship between some sectorial production and its corresponding value-added, is unavoidable. This means that the model is biased in the sense that we will always observed this kind of behavior, at least in one sector, no matter what are the parameters of the model. Furthermore, at the aggregate level, the same anomalous relationship may be observed for some parameter values. However, this is not the end of the story. With respect to the extended Leontief model, we can easily see from our analysis that the same troublesome relationship between production and value added, at the aggregate level, become true. Furthermore, at the sectorial level, we also show that at least for one sector we will always have a negative relationship between production and domestic demand. That systematic type of behavior makes this model biased towards a relationship (i.e. sectorial production and its domestic final demand) that economic evidence does not support. These are bad news, because they may point to a theoretical weakening of both models, and hence of some of the results ensuing from their possible empirical applications. In Section 2 we present the classical Leontief and Ghosh models, in order to establish the logical introduction to Section 3, where the main results on production and consumption biases are obtained. An open question therefore arises: is there any other way to incorporate final consumption and value-added endogenously in these models that may avoid such biased behavior? This issue is explored in Section 4 where we show that a way to avoid it in the Ghosh model is by somewhat mimicking some good features of Leontief's extended model, and the other way around. After the new rules are introduced, the aggregate problem still continuous in both models, but we establish sufficient conditions, on parameters of the models, to avoid it. Finally, Section 5 concludes.

By using a 2 × 2 commodity framework, we have formally explored the roots of the alleged anomalies in the extended Ghosh model first pointed out by Oosterhaven (2012) using some numerical examples. We find that, systematically, we may have a positive change in the production of one sector with a decrease in its value added. We have proved that some other anomalies also lurk in the extended Leontief model. Namely, we can have some sector for which, systematically too, a positive change in output goes along with a negative change in its final domestic consumption. Furthermore, both models, share the unwanted property that it is possible to have a negative relationship between aggregate total production and aggregate total value added. The odd behavior of these two classical extended models is hard to find in reality. This paper is a methodological one and its results are generic; thus the finding regarding the biased behavior is independent of the data base underlying the models — be it a text book example or a real world example built from an empirical data base. The systematic biases will always take place within these models' bounds and assumptions. The implication for empirical linear analysis seems to point out to a misspecification of the general equilibrium feedbacks implicit in the standard endogeneization of the extended linear models. This need not be the case, however, if other assumptions are considered instead. We have introduced, in Section 4, a new and simple set of rules to make endogenous the relation between value added and final demand. Under these new rules, at the sectorial level we are able to overcome the previous criticisms for both models, but not at the aggregate level. Nevertheless, some simple hypothesis can also overcome the anomalous aggregate behavior of the two models both under the new as well as the old rules. These results strongly suggest that an exploration of new endogenization rules can be a fruitful new line of research in this field.