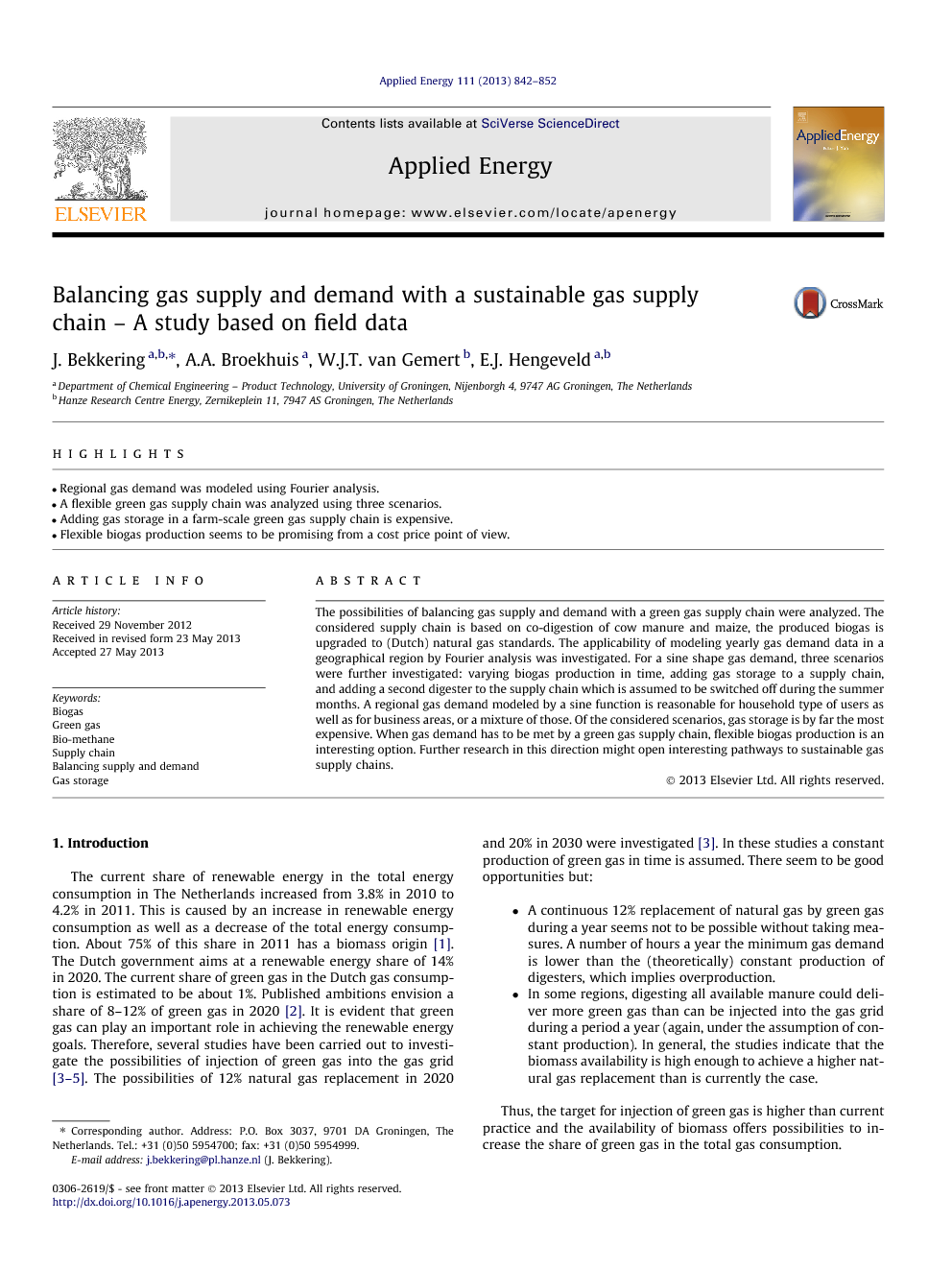 The possibilities of balancing gas supply and demand with a green gas supply chain were analyzed. The considered supply chain is based on co-digestion of cow manure and maize, the produced biogas is upgraded to (Dutch) natural gas standards. The applicability of modeling yearly gas demand data in a geographical region by Fourier analysis was investigated. For a sine shape gas demand, three scenarios were further investigated: varying biogas production in time, adding gas storage to a supply chain, and adding a second digester to the supply chain which is assumed to be switched off during the summer months. A regional gas demand modeled by a sine function is reasonable for household type of users as well as for business areas, or a mixture of those. Of the considered scenarios, gas storage is by far the most expensive. When gas demand has to be met by a green gas supply chain, flexible biogas production is an interesting option. Further research in this direction might open interesting pathways to sustainable gas supply chains.

The current share of renewable energy in the total energy consumption in The Netherlands increased from 3.8% in 2010 to 4.2% in 2011. This is caused by an increase in renewable energy consumption as well as a decrease of the total energy consumption. About 75% of this share in 2011 has a biomass origin [1]. The Dutch government aims at a renewable energy share of 14% in 2020. The current share of green gas in the Dutch gas consumption is estimated to be about 1%. Published ambitions envision a share of 8–12% of green gas in 2020 [2]. It is evident that green gas can play an important role in achieving the renewable energy goals. Therefore, several studies have been carried out to investigate the possibilities of injection of green gas into the gas grid [3], [4] and [5]. The possibilities of 12% natural gas replacement in 2020 and 20% in 2030 were investigated [3]. In these studies a constant production of green gas in time is assumed. There seem to be good opportunities but: • A continuous 12% replacement of natural gas by green gas during a year seems not to be possible without taking measures. A number of hours a year the minimum gas demand is lower than the (theoretically) constant production of digesters, which implies overproduction. • In some regions, digesting all available manure could deliver more green gas than can be injected into the gas grid during a period a year (again, under the assumption of constant production). In general, the studies indicate that the biomass availability is high enough to achieve a higher natural gas replacement than is currently the case. Thus, the target for injection of green gas is higher than current practice and the availability of biomass offers possibilities to increase the share of green gas in the total gas consumption. Usual analyses of biogas systems consider its production to be constant in time. Constant production, upgrading to natural gas quality and injection into the grid has a decreasing cost price per produced Nm3 when scale is increased. This is caused by decreasing investment costs of digesting, upgrading and injection per Nm3 green gas as the production rate increases. However, gas demand (i.e. the gas consumption by end users) varies with time, not only on a daily basis but also on a seasonal basis. From a technical point of view a constant green gas production and injection should not exceed the minimum gas demand in the grid into which the gas is injected. The pressure in the grid would become too high. This minimum gas demand might for instance occur on a warm July night. The usually suggested solution for a higher gas production than gas demand is gas storage, connection of gas distribution grids or compression and injection into the gas transport grid. It is not always clear what storage technology should be used under which circumstances. Neither is it clear whether a development in a more flexible biogas production, i.e. a higher production rate in winter and a lower production rate in summer, would increase the annual gas production quantity such, that the cost price of green gas (€ct/Nm3) decreases and more natural gas replacement is possible. As digestion of biomass is a biological process, the predominant opinion is that the process should be kept stable and changing operational parameters should be done carefully [6]. On the other hand, it is also known that farmers sometimes add glycerin to boost the production or re-enter digestate in the digester if production must be limited. Chances for operating one or more extra digesters to meet the gas demand only during some months a year when gas demand is high are not explored yet to the current knowledge of the authors. Exploring these options would enhance the understanding of the possibilities of green gas in our gas supply, both technical and economic. These considerations raise the following research question: What would be the cost price of green gas as a function of scale, when the seasonal (fluctuation in the) gas demand should be met by a green gas supply chain? The following sub questions are derived from this research question: (1) How can a seasonal gas demand be modeled as a mathematical description which is sufficiently accurate? (2) How can a green gas supply chain be designed to be flexible to meet the varying gas demand? At this point three scenarios for investigation are distinguished: • Varying the gas production of a digester such that the seasonal swing in gas demand is met. In this scenario no gas storage is taken into account. • Incorporating a gas storage facility into the supply chain with constant gas production, such that, in case of overproduction, excess gas can be stored. • A digester is added parallel to the digester already available at constant production, with the intention to ‘switch on and off’ the extra digester. (3) Given a gas demand pattern in a geographical region, can verdicts be done about optimal locations for digesters, i.e. is location planning a tool to establish a better fit between supply and demand? Optimal in this respect should be interpreted as the lowest cost price within defined sustainability criteria. In Section 2 we discuss our approach to answering these questions. In Section 3 the results of our simulations are presented and in Section 4 we discuss the results after which the conclusions are presented in Section 5.

Modeling a seasonal gas demand, based on measured demand data, can be done by a sine function under plausible assumptions. This holds for all considered gas demand patterns, and range from household type of consumers as well as large companies. Very specific type of users, such as a bakery or a laundry [8], have not been analyzed. Three scenarios for flexibilisation of a green gas supply chain were identified and analyzed: Flexible biogas production, constant biogas production combined with gas storage, and two biogas plants with a constant biogas output, of which one is operated only during several months a year. Comparing the cost price results of the three analyzed scenarios, it is evident that gas storage is more expensive than flexible production or adding an extra digester. Flexible biogas production is the cheapest. This holds for all SSFs. However, no relevant literature could be found on research concerning actively steering the output quantity of digesters in time. In this respect, there seem to be possibilities to a certain extent, but these are more indicated by practical experience than by sound scientific knowledge. This means that, with the current knowledge, the stability of the digestion process is not guaranteed at flexibilisation. Therefore, based on the current state of technology, green gas supply chains which meet a gas demand with a relatively low SSF will be more successful than when a high SSF needs to be met. This means that production plants should preferably be located near industrial areas. At increasing scales, the possibilities for flexibilisation in the supply chain decrease. Limitations for scaling up are the chosen maximum values for gas storage capacity and a maximum production rate of a digester. At the largest considered scale (1200 Nm3/h green gas), only an SSF = 2 is achievable by adding a second digester. For increasing flexibility of the supply chain further, very large gas storage facilities would be needed.