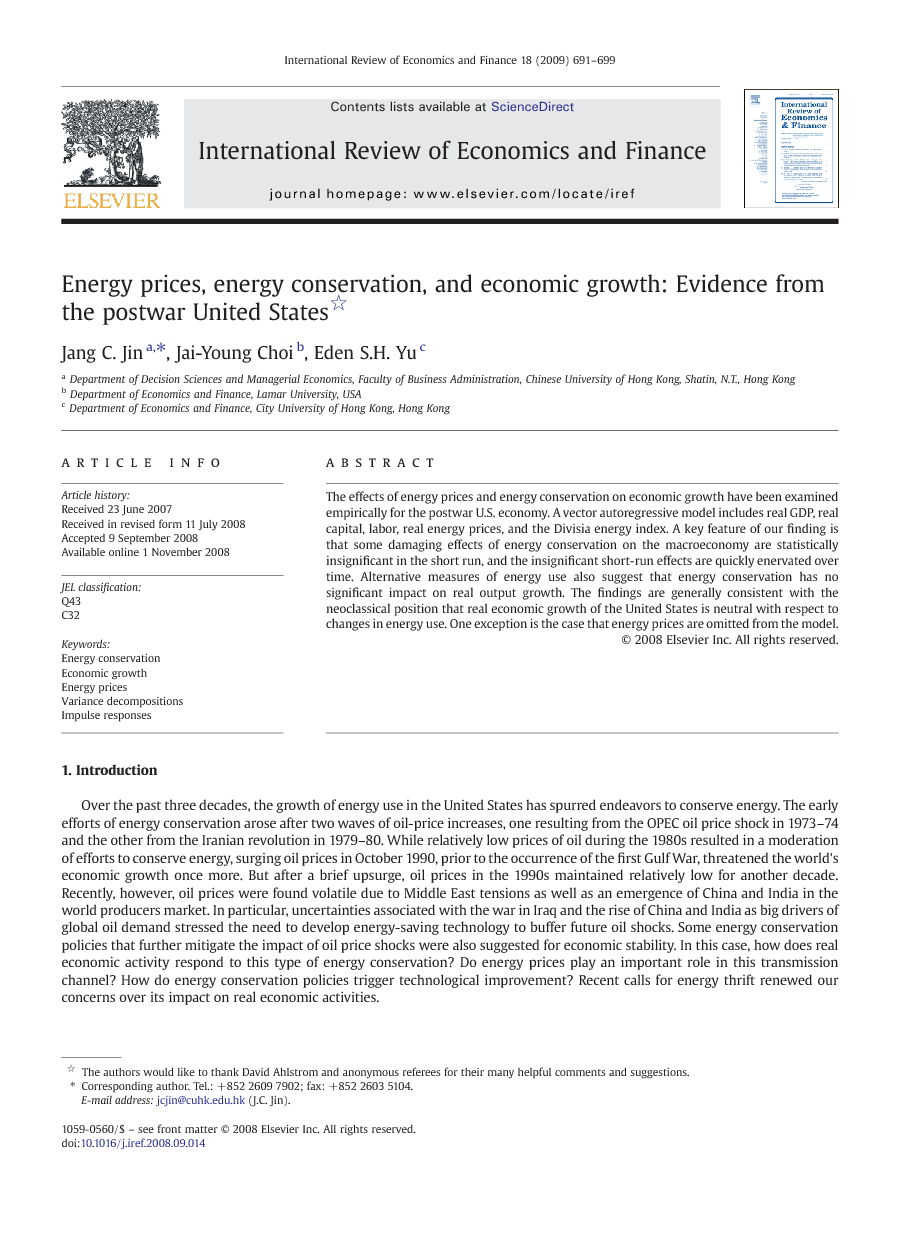 The effects of energy prices and energy conservation on economic growth have been examined empirically for the postwar U.S. economy. A vector autoregressive model includes real GDP, real capital, labor, real energy prices, and the Divisia energy index. A key feature of our finding is that some damaging effects of energy conservation on the macroeconomy are statistically insignificant in the short run, and the insignificant short-run effects are quickly enervated over time. Alternative measures of energy use also suggest that energy conservation has no significant impact on real output growth. The findings are generally consistent with the neoclassical position that real economic growth of the United States is neutral with respect to changes in energy use. One exception is the case that energy prices are omitted from the model.

Over the past three decades, the growth of energy use in the United States has spurred endeavors to conserve energy. The early efforts of energy conservation arose after two waves of oil-price increases, one resulting from the OPEC oil price shock in 1973–74 and the other from the Iranian revolution in 1979–80. While relatively low prices of oil during the 1980s resulted in a moderation of efforts to conserve energy, surging oil prices in October 1990, prior to the occurrence of the first Gulf War, threatened the world's economic growth once more. But after a brief upsurge, oil prices in the 1990s maintained relatively low for another decade. Recently, however, oil prices were found volatile due to Middle East tensions as well as an emergence of China and India in the world producers market. In particular, uncertainties associated with the war in Iraq and the rise of China and India as big drivers of global oil demand stressed the need to develop energy-saving technology to buffer future oil shocks. Some energy conservation policies that further mitigate the impact of oil price shocks were also suggested for economic stability. In this case, how does real economic activity respond to this type of energy conservation? Do energy prices play an important role in this transmission channel? How do energy conservation policies trigger technological improvement? Recent calls for energy thrift renewed our concerns over its impact on real economic activities. Biophysical and ecological economists' view has been proposed as an explanation for the macroeconomic role of energy. Cleveland, Costanza, Hall, and Kaufmann (1984), for example, proposed that energy plays a central role in income determination and hence an economy would be significantly affected by energy use. Sweeney and Fenichel (1986), however, found that the response of energy consumption to changes in energy prices was asymmetric. In particular, a decrease in energy consumption was more sensitive to price increases than did an increase in energy consumption due to price decreases. This suggests that energy conservation can be achieved simply by raising energy prices, though costly and painful. Alternatively, Chandler, Geller, and Ledbetter (1988) suggested a non-price conservation that includes technological improvements to raise energy efficiency. In this case, energy consumption can be reduced without creating damaging effects on the economy. Recently, Smulders and de Nooij (2003) further developed a ‘new’ growth model in which the development of new energy-related technology is determined endogenously by different levels of energy conservation. If the level of conservation is slow, there will be less incentives to develop new technology, and hence a decrease in energy use will depress the economy. But if energy consumption is to be reduced fast, perhaps, due to a sudden oil price hike, people may have more incentives to develop new technology. In this case, energy conservation may have less impact on output growth. Several studies have attempted to find empirically the role of energy in the short and long runs, but a consensus on the role of energy has been difficult to find. In particular, most studies have focused upon the identification of either Granger-causal directions or cointegrated long-run relations, but do not explicitly show whether the signs of the effects are positive or negative (e.g. Stern, 1993 and Stern, 2000, among others). If the signs of the effects are unidentified, any causal directions or cointegrated relations found would be difficult to interpret. For example, if output effects of energy are found negative, this exotic result may have such a policy implication that energy conservation (i.e. a decrease in energy consumption) would have some positive, favorable impacts on real output growth. Furthermore, inferences of Granger causality even within a vector autoregressive (VAR) model attempt to use parameter estimates of each equation. It uses the same logic as in a bivariate case. Since most hypotheses in the VAR model are cross-equation in nature, variance decompositions (VDCs) and impulse response functions (IRFs), which are based upon the moving-average representations of the VAR model, would be more appropriate to examine the dynamic responses of one variable to another over time. In particular, the IRFs can be used to identify the signs of the effects over longer horizons. The aim of this paper is to explore with the postwar U.S. data how energy conservation is compatible with observed movements in economic growth. The role of energy prices will be further investigated in this relationship. The framework of analysis is a five-variable VAR model that includes real gross domestic product (GDP), real capital, labor, real energy prices, and real energy consumption. For the energy consumption variable, a quality-weighted Divisia energy index is constructed based on expenditures on three major resources of energy. In this case, energy expenditures are used as a proxy for the quality of energy. Energy prices are also included in the model to allow them to affect GDP directly, as well as indirectly through energy consumption. A rapid rise of oil prices, for example, may directly hamper economic growth at least in the short run because production costs will rise until energy-saving technologies are developed. It may also reduce the consumption of oil, which in turn lowers economic activities.

This paper has empirically examined the effects of energy conservation on economic growth for the postwar U.S economy. The role of energy prices is also investigated. The framework of analysis is a five-variable VAR model that consists of real GDP, real capital, labor, real energy prices, and the Divisia energy consumption index. The Divisia index is constructed using expenditures on three major energy resources. The effects of changes in energy consumption on GDP growth are evaluated through the computation of variance decompositions and impulse response functions. A key feature of our finding from the innovation accounting results is that some damaging effects of energy conservation on the macroeconomy are found to be insignificant in the very short run, and the insignificant short-run effects are quickly enervated over time. Alternative measures of energy use also suggest that energy thrift has no significant impacts on real output growth as long as energy prices are included in the model. This implies that the U.S. economy has been grown independently of changes in energy use. The forecast error variance of GDP growth due to a shock to energy consumption appears to be relatively small and insignificant. The impulse responses of output growth to energy consumption shocks are also found to be insignificant, and the insignificant short-run effect quickly dies out over time. These findings are broadly consistent with the neoclassical position that real economic growth is neutral with respect to changes in energy use. To check on the robustness of the results, several sensitivity tests have been done. First, energy prices were omitted from the model; second, the Divisia energy index was replaced by unadjusted final energy use; third, total energy consumption was disaggregated; fourth, alternative variable orderings were used. However, the basic results were generally robust, except for the first case in which the energy price variable was excluded from the model. When the basic model dropped the energy price variable, energy consumption shocks played a non-trivial role in explaining the movements of real GDP growth in the short run. While there may well be other interpretations of this exotic behavior, one explanation for this finding would be due to an exclusion of the energy-price-shock variable when modeling the U.S. economy. Finally, the energy price shocks are observed to have significant negative effects on real economic growth. Disaggregated data also provide evidence that changes in petroleum prices have significant impacts on real output growth. It thus appears that the U.S. economy is predictable not only in relation to changes in capital and labor, but also in relation to the movement of energy prices.