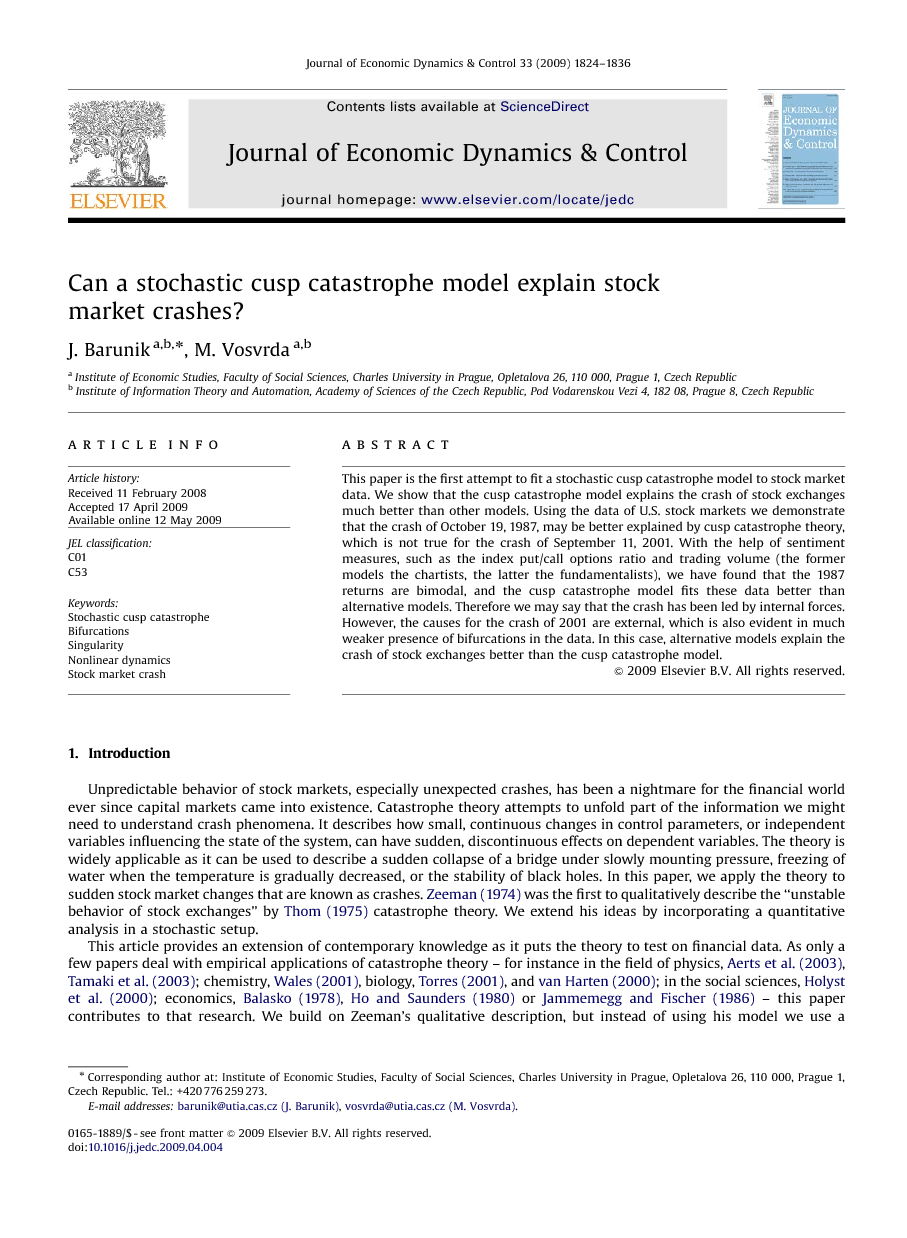 Unpredictable behavior of stock markets, especially unexpected crashes, has been a nightmare for the financial world ever since capital markets came into existence. Catastrophe theory attempts to unfold part of the information we might need to understand crash phenomena. It describes how small, continuous changes in control parameters, or independent variables influencing the state of the system, can have sudden, discontinuous effects on dependent variables. The theory is widely applicable as it can be used to describe a sudden collapse of a bridge under slowly mounting pressure, freezing of water when the temperature is gradually decreased, or the stability of black holes. In this paper, we apply the theory to sudden stock market changes that are known as crashes. Zeeman (1974) was the first to qualitatively describe the “unstable behavior of stock exchanges” by Thom (1975) catastrophe theory. We extend his ideas by incorporating a quantitative analysis in a stochastic setup. This article provides an extension of contemporary knowledge as it puts the theory to test on financial data. As only a few papers deal with empirical applications of catastrophe theory – for instance in the field of physics, Aerts et al. (2003), Tamaki et al. (2003); chemistry, Wales (2001), biology, Torres (2001), and van Harten (2000); in the social sciences, Holyst et al. (2000); economics, Balasko (1978), Ho and Saunders (1980) or Jammemegg and Fischer (1986) – this paper contributes to that research. We build on Zeeman's qualitative description, but instead of using his model we use a randomly perturbed version, and the primary aim of this research is to answer the question of whether stochastic catastrophe models are capable of indicating stock market crashes. The structure of this paper will be as follows. In the first part the basic principles of catastrophe theory will be introduced. Stochastic catastrophe theory and a review of statistical testing methods will be discussed. These methods have been crucial in the history of catastrophe theory, mainly in the hands of critics like Zahler and Sussman (1977) who widely criticized catastrophe theory for non-existence of methods enabling its statistical testing. In the second part, we argue that there exists a consistent theory for statistical testing and we discuss in detail Zeeman's main hypotheses about the instability of stock markets. The role of fundamentalists and chartists and their influence on stock market changes will also be discussed. What we regard as the most significant aspect of this paper is estimating a cusp catastrophe on real-world financial data. Our key hypothesis is that the cusp catastrophe model is able to fit the data better than an alternative linear regression model, and/or nonlinear(logistic) model. We fit the catastrophe model to the data of the October 19, 1987 crash, known as Black Monday which was the greatest single-day loss (20.5%) that Wall Street has ever suffered in continuous trading. For comparison, we use another large crash, that of September 11, 2001. The final part is devoted to the hypothesis that while in 1987 the crash was caused by internal forces, in 2001 there were external forces, namely the 9/11 terrorist attack, that caused the crash. Thus the catastrophe model should fit the data of 1987 well, as bifurcations leading to instability are present. However, it should not perform better than linear regression does on the 2001 data. As Zeeman's original model considers returns of the stock market rather than prices, we follow his analysis, and use Standard and Poor's 500 index returns as the behavioral variable. As the control variables we use the measures of sentiment, precisely the OEX1 put/call ratio which appears to be a very good measure of speculative money (i.e. in Bates, 1991; Finucane, 1991; or Wang et al., 2006) in the capital market, against the daily change of total trading volume, the ratio of advancing stocks volume and declining stocks volume, the Dow Jones Composite Bond Index, and a one-day lag of S&P 500 returns as good proxy for large, fundamental investors.

Uncertain behavior of stock markets has always been at the leading edge of research. Using Cobb and Zacks (1985), Hartelman (1997), Hartelman et al. (1998) and Wagenmakers et al. (2005) stochastic methods we have managed to test cusp catastrophe theory on financial data, and we have arrived at very interesting results which may help to advance the frontier of understanding stock market crashes. We may thus confirm that the stochastic catastrophe model explains the stock market crash much better than alternative linear regression models, or a nonlinear logistic model. We have fitted the data of the two stock market crashes, the first being the crash of October 19, 1987, and the second September 11, 2001. We have used the sentiment measures to model the proportion of technical and fundamental players in the market. We have chosen the daily change of total trading volume, the ratio of advancing stocks volume and declining stocks volume, the OEX put/call ratio, the Dow Jones Composite Bond Index, and one lag of S&P 500 returns. We expected OEX put/call ratio to be a very good measure of the technical players, as it represents speculative money in the market and the trading volume to be the measure of fundamental players as it represents the excess demand. Our most important result is that the data from the year 1987 contained bifurcation points. We have identified the bimodality of the returns by the test for multimodality, which confirms that there is a 75% probability that there is at least one bifurcation point in the data. More important, the cusp catastrophe models fit these data much better than other models that have been used. Hence we conclude that the internal processes of the first dataset led to the crash in 1987. On the other hand, the crash of September 11, 2001, can be better explained by the alternative logistic model. We have also found only a 26% probability that there is at least one bifurcation point in these data, which is also in line with our second hypothesis: that due to the fact that this crash was caused by external forces, the presence of bifurcations in the data is much weaker. Our findings may advance the frontier of research, as it is the first attempt to quantitatively explain stock market crashes by stochastic cusp catastrophe theory. We have also managed to show that not just the price information is important for stock market analysis; other measures, such as the measures of sentiment of the stock markets, may also have a crucial impact. Finally, it is necessary to mention that the testing has been conducted only on the restricted datasets. Thus, further work is needed to test on different data, in which the changes in speculative money in the stock market may lead to a crash. The main significant question, whether cusp catastrophe theory may help as an early indication of stock market crashes, still remains to be answered.