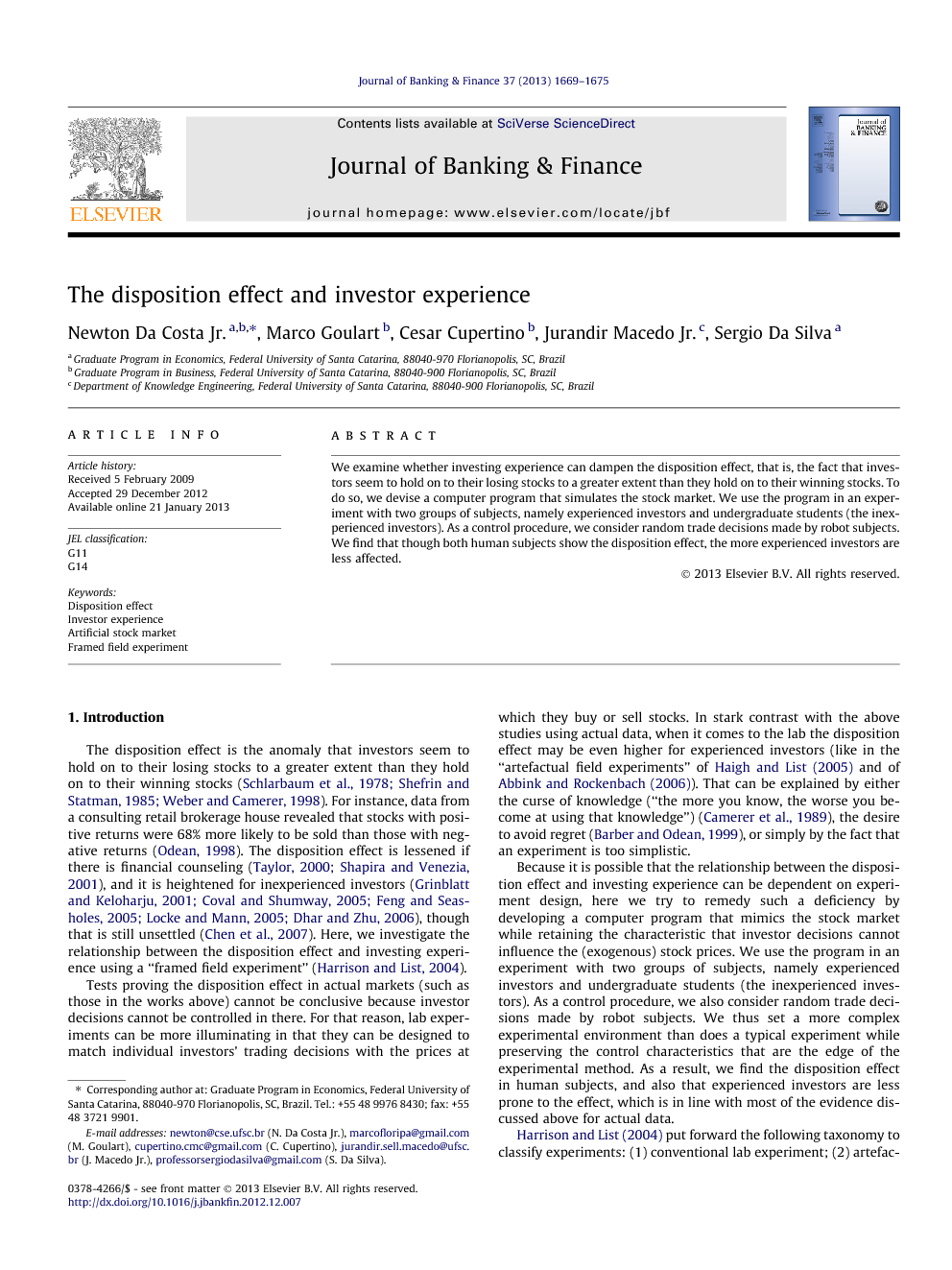 We examine whether investing experience can dampen the disposition effect, that is, the fact that investors seem to hold on to their losing stocks to a greater extent than they hold on to their winning stocks. To do so, we devise a computer program that simulates the stock market. We use the program in an experiment with two groups of subjects, namely experienced investors and undergraduate students (the inexperienced investors). As a control procedure, we consider random trade decisions made by robot subjects. We find that though both human subjects show the disposition effect, the more experienced investors are less affected.

The disposition effect is the anomaly that investors seem to hold on to their losing stocks to a greater extent than they hold on to their winning stocks (Schlarbaum et al., 1978, Shefrin and Statman, 1985 and Weber and Camerer, 1998). For instance, data from a consulting retail brokerage house revealed that stocks with positive returns were 68% more likely to be sold than those with negative returns (Odean, 1998). The disposition effect is lessened if there is financial counseling (Taylor, 2000 and Shapira and Venezia, 2001), and it is heightened for inexperienced investors (Grinblatt and Keloharju, 2001, Coval and Shumway, 2005, Feng and Seasholes, 2005, Locke and Mann, 2005 and Dhar and Zhu, 2006), though that is still unsettled (Chen et al., 2007). Here, we investigate the relationship between the disposition effect and investing experience using a “framed field experiment” (Harrison and List, 2004). Tests proving the disposition effect in actual markets (such as those in the works above) cannot be conclusive because investor decisions cannot be controlled in there. For that reason, lab experiments can be more illuminating in that they can be designed to match individual investors’ trading decisions with the prices at which they buy or sell stocks. In stark contrast with the above studies using actual data, when it comes to the lab the disposition effect may be even higher for experienced investors (like in the “artefactual field experiments” of Haigh and List (2005) and of Abbink and Rockenbach (2006)). That can be explained by either the curse of knowledge (“the more you know, the worse you become at using that knowledge”) (Camerer et al., 1989), the desire to avoid regret (Barber and Odean, 1999), or simply by the fact that an experiment is too simplistic. Because it is possible that the relationship between the disposition effect and investing experience can be dependent on experiment design, here we try to remedy such a deficiency by developing a computer program that mimics the stock market while retaining the characteristic that investor decisions cannot influence the (exogenous) stock prices. We use the program in an experiment with two groups of subjects, namely experienced investors and undergraduate students (the inexperienced investors). As a control procedure, we also consider random trade decisions made by robot subjects. We thus set a more complex experimental environment than does a typical experiment while preserving the control characteristics that are the edge of the experimental method. As a result, we find the disposition effect in human subjects, and also that experienced investors are less prone to the effect, which is in line with most of the evidence discussed above for actual data. Harrison and List (2004) put forward the following taxonomy to classify experiments: (1) conventional lab experiment; (2) artefactual field experiment; (3) framed field experiment; and (4) natural field experiment. As observed, ours is a framed field experiment, which is also an artefactual field experiment but with field context in the task and information set used by the subjects. Table 1 presents the main results of selected recent work related to the disposition effect and investor experience; the reader may wish to consider the references therein for a more comprehensive account of the vast literature on the subject. Table 1. Selected recent work related to the disposition effect and investor experience. Author Result Menkhoff and Nikiforow (2009) Fund managers who have strong incentives to learn efficient behavior and who do not endorse the behavioral finance view, end up failing to learn, thus suggesting that many behavioral finance patterns are rooted in human behavior and difficult to be overcome by learning Chang (2008) Evidence of the disposition effect in investors of the Taiwanese warrant markets Kliger and Kudryavtsev (2008) The reference point updating process of the disposition effect is more reactive to events when information flow is low and prices are sensitive to market fluctuations. Agents facing numerous alternatives consider those that have caught their attention Lee et al. (2008) Evidence of the disposition effect in internet-based stock trading Goetzmann and Massa (2008) A panel of individual investor trading records shows that exposure to a portfolio of stocks held by disposition-prone investors explains cross-sectional differences in daily returns Hales (2007) Investors are motivated to agree unthinkingly with information that suggests they might make money on their investment, but disagree with information that suggests they might lose money Hedesstrom et al. (2007) In an internet-based survey of fictitious choices among fund categories, home bias and a diversification heuristic were unaffected by previous stock market investment experience Garvey and Murphy (2004) Data on a US proprietary stock-trading team provide evidence of the disposition effect Table options The rest of this paper is organized as follows. Section 2 presents the three measures of the disposition effect employed in this work, Section 3 details the design of the experiment, Section 4 presents the characteristics of the subjects participating in the experiment, Section 5 reports results, and Section 6 concludes the study. A sensitivity analysis of the results is presented in an Appendix.

Does investor experience dampen the disposition effect? Most studies using actual data answer “yes”. However, this answer conflicts with the results found in lab experiments. Tests proving the disposition effect in actual markets cannot be conclusive because investor decisions cannot be controlled in there. Control characteristics are an advantage of the experimental method, though results can still be dependent on experiment design, mainly if the experiment is too simplistic. Here, we consider that possibility and thus devise a more elaborated experiment through a computer program that mimics the stock market while retaining the control characteristics. In line with the actual data studies, our “framed field experiment” found that the disposition effect is reduced if investors have more than 5 years of experience in stock markets. The disposition effect is commonly attributed to a cognitive illusion of the human brain. To evaluate such a proposition we consider not only professional investors and students in our experiment, but also robots. Do robots dream of winning stocks? If they do, the phenomenon has to be explained by some type of emergence property resulting from the dynamics of the experiment, rather than by human brain imperfections. We find that robots do not exhibit the effect, and thus we cannot dismiss that the phenomenon is really caused by cognitive illusion.