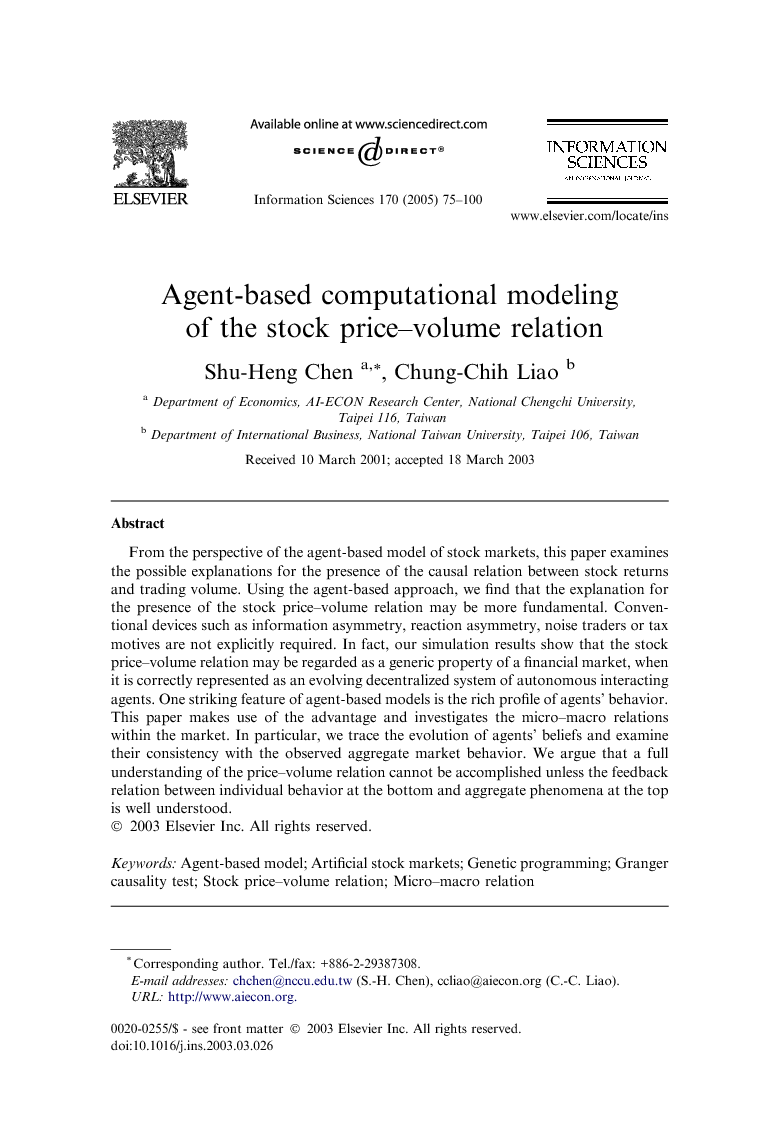 From the perspective of the agent-based model of stock markets, this paper examines the possible explanations for the presence of the causal relation between stock returns and trading volume. Using the agent-based approach, we find that the explanation for the presence of the stock price–volume relation may be more fundamental. Conventional devices such as information asymmetry, reaction asymmetry, noise traders or tax motives are not explicitly required. In fact, our simulation results show that the stock price–volume relation may be regarded as a generic property of a financial market, when it is correctly represented as an evolving decentralized system of autonomous interacting agents. One striking feature of agent-based models is the rich profile of agents' behavior. This paper makes use of the advantage and investigates the micro–macro relations within the market. In particular, we trace the evolution of agents' beliefs and examine their consistency with the observed aggregate market behavior. We argue that a full understanding of the price–volume relation cannot be accomplished unless the feedback relation between individual behavior at the bottom and aggregate phenomena at the top is well understood.

One distinguishing feature of ACE (and thus ABSMs) is that some interesting macro-phenomena of financial markets could emerge (be endogenously generated) from interactions among adaptive agents without exogenously imposing any conditions like unexpected events, information cascades, noise or dumb traders, etc. In this paper, we show that the presence of the stock price–volume causal relation does not require any explicit assumptions like information asymmetry, reaction asymmetry, noise traders, or tax motives. In fact, it suggests that the causal relation may be a generic property in a market modeled as an evolving decentralized system of autonomous interacting agents. We also show that our understanding of the appearance or disappearance of the price–volume relation can never be complete if the feedback relation between individual behavior and aggregate outcome is neglected. This feedback relation is, however, highly complex, and may defy any simple analysis, as in the case of the one we proposed initially. Consequently, econometric analysis which fails to take into account this complex feedback relation between the micro- and macro-aspects may produce misleading results. Unfortunately, we are afraid that this is exactly what mainstream financial econometrics ended up doing in a large number of empirical studies.