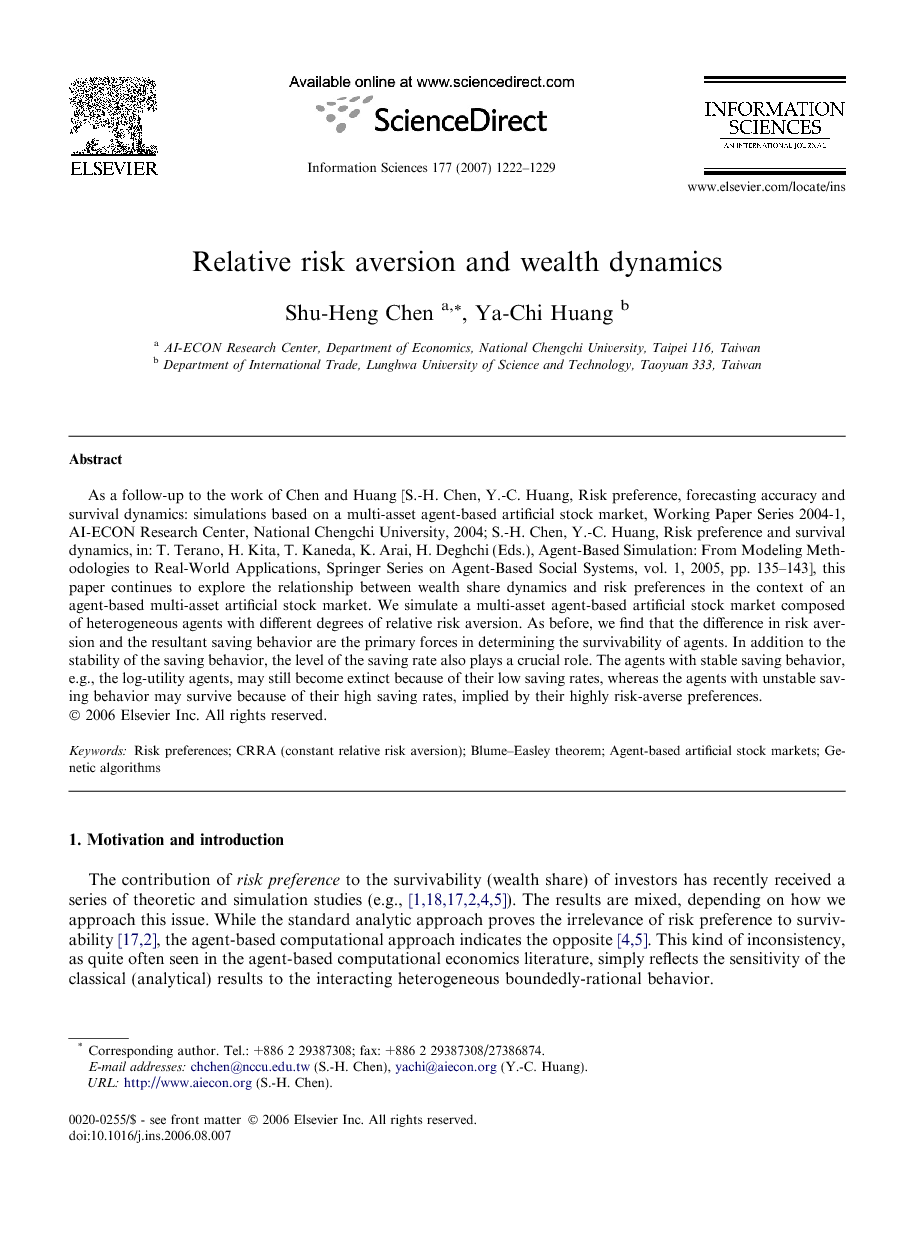 As a follow-up to the work of Chen and Huang [S.-H. Chen, Y.-C. Huang, Risk preference, forecasting accuracy and survival dynamics: simulations based on a multi-asset agent-based artificial stock market, Working Paper Series 2004-1, AI-ECON Research Center, National Chengchi University, 2004; S.-H. Chen, Y.-C. Huang, Risk preference and survival dynamics, in: T. Terano, H. Kita, T. Kaneda, K. Arai, H. Deghchi (Eds.), Agent-Based Simulation: From Modeling Methodologies to Real-World Applications, Springer Series on Agent-Based Social Systems, vol. 1, 2005, pp. 135–143], this paper continues to explore the relationship between wealth share dynamics and risk preferences in the context of an agent-based multi-asset artificial stock market. We simulate a multi-asset agent-based artificial stock market composed of heterogeneous agents with different degrees of relative risk aversion. As before, we find that the difference in risk aversion and the resultant saving behavior are the primary forces in determining the survivability of agents. In addition to the stability of the saving behavior, the level of the saving rate also plays a crucial role. The agents with stable saving behavior, e.g., the log-utility agents, may still become extinct because of their low saving rates, whereas the agents with unstable saving behavior may survive because of their high saving rates, implied by their highly risk-averse preferences.

The contribution of risk preference to the survivability (wealth share) of investors has recently received a series of theoretic and simulation studies (e.g., [1], [18], [17], [2], [4] and [5]). The results are mixed, depending on how we approach this issue. While the standard analytic approach proves the irrelevance of risk preference to survivability [17] and [2], the agent-based computational approach indicates the opposite [4] and [5]. This kind of inconsistency, as quite often seen in the agent-based computational economics literature, simply reflects the sensitivity of the classical (analytical) results to the interacting heterogeneous boundedly-rational behavior. Ref. [4] actually supports an earlier result obtained in [1], which is also known as the Kelly criterion in financial economics. This result basically points out the optimal type of risk preference, namely, the CRRA (constant relative risk aversion coefficient) agent with an RRA coefficient of one. Equivalently, it is the log utility function. [5] reestablishes this result, while in an agent-based computational setting. They examine the long-run wealth share dynamics of eleven different types of CRRA agents, with RRA coefficients ranging from 0 to 1 with increments of 0.1. They find that in finite time the wealth share is positively related to the CRRA coefficient, and in the long run, only the agents with high CRRA coefficients can survive. All others become extinct. This paper is an extension of [5] in the sense that we wish to extend the earlier testing domain of the CRRA coefficient from [0, 1] to an even larger positive domain. In doing so, we are inquiring whether a higher degree of risk aversion can actually enhance the survivability of agents. Notice that the degree of risk aversion is not the original concern of either the Kelly criterion or the Blume–Easley theorem [1], both of which are only concerned with the dominance of the log-utility type agents. Risk aversion is involved because the log-utility agent is also known as a CRRA type of agent with an RRA coefficient of one. Now, is this the optimal degree of risk aversion? Will more risk-averse agents (i.e., those with RRA coefficients greater than one) be also driven out of the market when they are competing with the log-utility agents? Or, would higher risk aversion help them survive? These are the questions that we try to answer in this paper. We consider these questions to be particularly relevant because the empirical literature actually suggests a large range of relative risk aversion coefficients. Some of them are exactly one or less than one, but many more are greater than one. Of course, it is doubtful whether one can directly compare our results with those empirical values, since they refer to quite different stories. However, given the prevailing empirical results on high risk aversion, it is definitely useful to know what makes them so, and our agent-based computational setting can serve as a good starting point. The remainder of this paper is organized as follows. Section 2 gives a brief introduction to a simple multi-asset model, which is originally used in [1] and later extended and modified by [17]. Section 3 presents the artificial multi-asset market, which is an agent-based version of the analytical model presented in Section 2. Section 4 gives the experimental design. To justify the range of the relative risk aversion coefficient considered in this paper, it starts with a brief review of the literature on the empirical estimation of the RRA coefficient in Section 4.1, followed by the setting of other control parameters in Section 4.2. The simulation results are presented and discussed in Section 5, and are followed by the concluding remarks in Section 6.

The basic conclusion that risk preference matters as established in [4] and [5] remains unchanged in this paper. The only thing modified here is what causes it to matter. The early analysis singles out the stable saving behavior as the distinguishing feature of the log-utility agents, and considers it to be the contributing factor to survivability. In this analysis, we add the level of the saving rate to it, and suggest that the level (the first moment) and the stability (the second moment) can both be contributing factors and in effect work together. When the first-moment effect dominates the second-moment effect, the log-utility agents become extinct and those who survive are the very risk-averse agents. This study can be possibly related to the extensive literature on the empirical estimation of the RRA coefficients. A wide range of RRA coefficients has been found in the literature, and so far no unanimous conclusion has been reached. The agent-based computational approach as demonstrated in this paper proposes the possibility that in reality there may be such a wide survival range of the relative risk aversion coefficient. Within this range, the first-moment effect counter balances the second-moment effect, and all agents can survive with some positive and large wealth share.