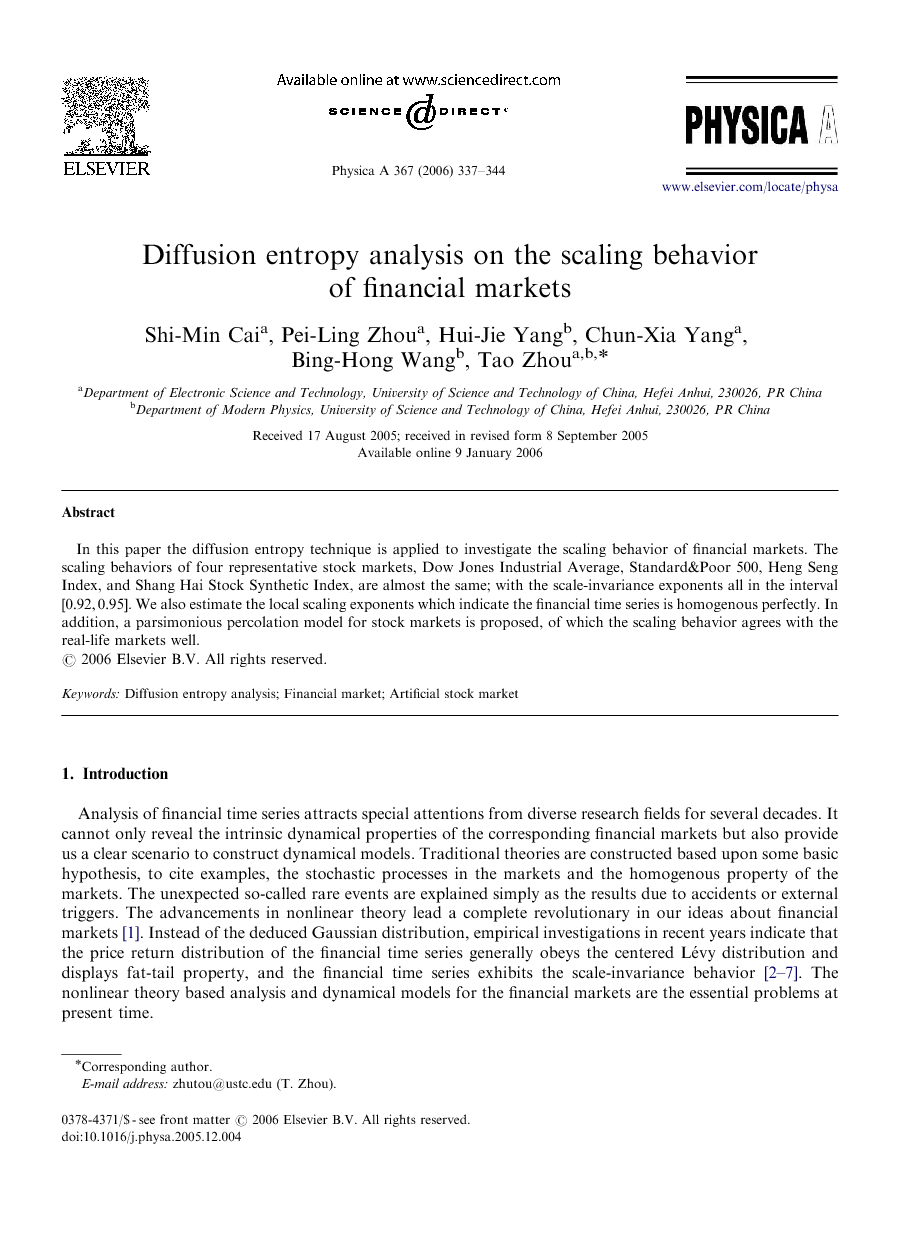 In this paper the diffusion entropy technique is applied to investigate the scaling behavior of financial markets. The scaling behaviors of four representative stock markets, Dow Jones Industrial Average, Standard&Poor 500, Heng Seng Index, and Shang Hai Stock Synthetic Index, are almost the same; with the scale-invariance exponents all in the interval [0.92,0.95][0.92,0.95]. We also estimate the local scaling exponents which indicate the financial time series is homogenous perfectly. In addition, a parsimonious percolation model for stock markets is proposed, of which the scaling behavior agrees with the real-life markets well.

Analysis of financial time series attracts special attentions from diverse research fields for several decades. It cannot only reveal the intrinsic dynamical properties of the corresponding financial markets but also provide us a clear scenario to construct dynamical models. Traditional theories are constructed based upon some basic hypothesis, to cite examples, the stochastic processes in the markets and the homogenous property of the markets. The unexpected so-called rare events are explained simply as the results due to accidents or external triggers. The advancements in nonlinear theory lead a complete revolutionary in our ideas about financial markets [1]. Instead of the deduced Gaussian distribution, empirical investigations in recent years indicate that the price return distribution of the financial time series generally obeys the centered Lévy distribution and displays fat-tail property, and the financial time series exhibits the scale-invariance behavior [2], [3], [4], [5], [6] and [7]. The nonlinear theory based analysis and dynamical models for the financial markets are the essential problems at present time. One of the important features of the financial time series is the scale-invariance property, which can highlight the dynamical mechanics for the corresponding markets. Consider a complex system containing a large amount of particles. The scale-invariance property in the diffusion process of this system can be described mathematically with the probability distribution function as equation(1) View the MathML sourceP(x,t)=1tδFxtδ, Turn MathJax on where x is the displacements of the particles in the complex system and δδ the scale-invariance exponent. The theoretical foundation of this property is the central limit theorem and the generalized central limit theorem [8] and [9]. For the standard diffusion process, the parameter is δ=0.5δ=0.5 and F(y)F(y) is the Gaussian function. And δ≠0.5δ≠0.5 exhibits the deviation of the dynamical process from the normal stochastic one. For a financial time series, the delay--register vectors, denoted with {yk,yk+1,…,yk+m-1|k=1,2,3,…,N-m+1}{yk,yk+1,…,yk+m-1|k=1,2,3,…,N-m+1}, can be regarded as the trajectories of N-m+1N-m+1 particles during the period of 0 to m. By this way we can map a time series to a diffusion process, called overlapping diffusion process in this paper. An alternative solution is to separate the considered time series into many non-overlapping segments and regard these segments as the trajectories. In literature, several variance-based methods are proposed to detect the scale-invariance properties, such as the probability moment method [10], the fluctuation approach, the de-trended fluctuation approach [11], the factorial moments [12], [13] and [14] and the de-trended moving average [15]. However, these variance-based methods have two basic shortcomings. One is the scale-invariance property can be detected, while the value of the exponent may not be obtained correctly. The other is for some processes, like the Lévy flight, the variance tends to infinite and these methods are unavailable at all. Although the infinite cannot be reached due to the finite records of empirical data, clearly we cannot obtain correct information about the dynamics under these conditions. Hence, a new method called diffusion entropy analysis (DEA) is proposed to overcome these problems [16]. In this paper the DEA is used to detect the scaling behavior of financial markets.

In summary, by means of the DE method we investigate the scaling behavior embedded in the time series of four typical financial markets. The scale-invariance exponents are almost the same, being in the interval of [0.92,0.95][0.92,0.95]. We also estimate the local scaling exponents which indicate the time series is homogenous perfectly. The present empirical study of the scaling behavior in real markets also provides a usable quantity to check the reliability of artificial market model. Consequently, we propose a parsimonious percolation model for stock market. To keep our description self-contained, we review the model briefly. Proper initial condition and parameters can lead its stock price series being similar to the real-life index. Especially, the scaling behavior detected with the DE method agrees with the real-life financial markets very well.