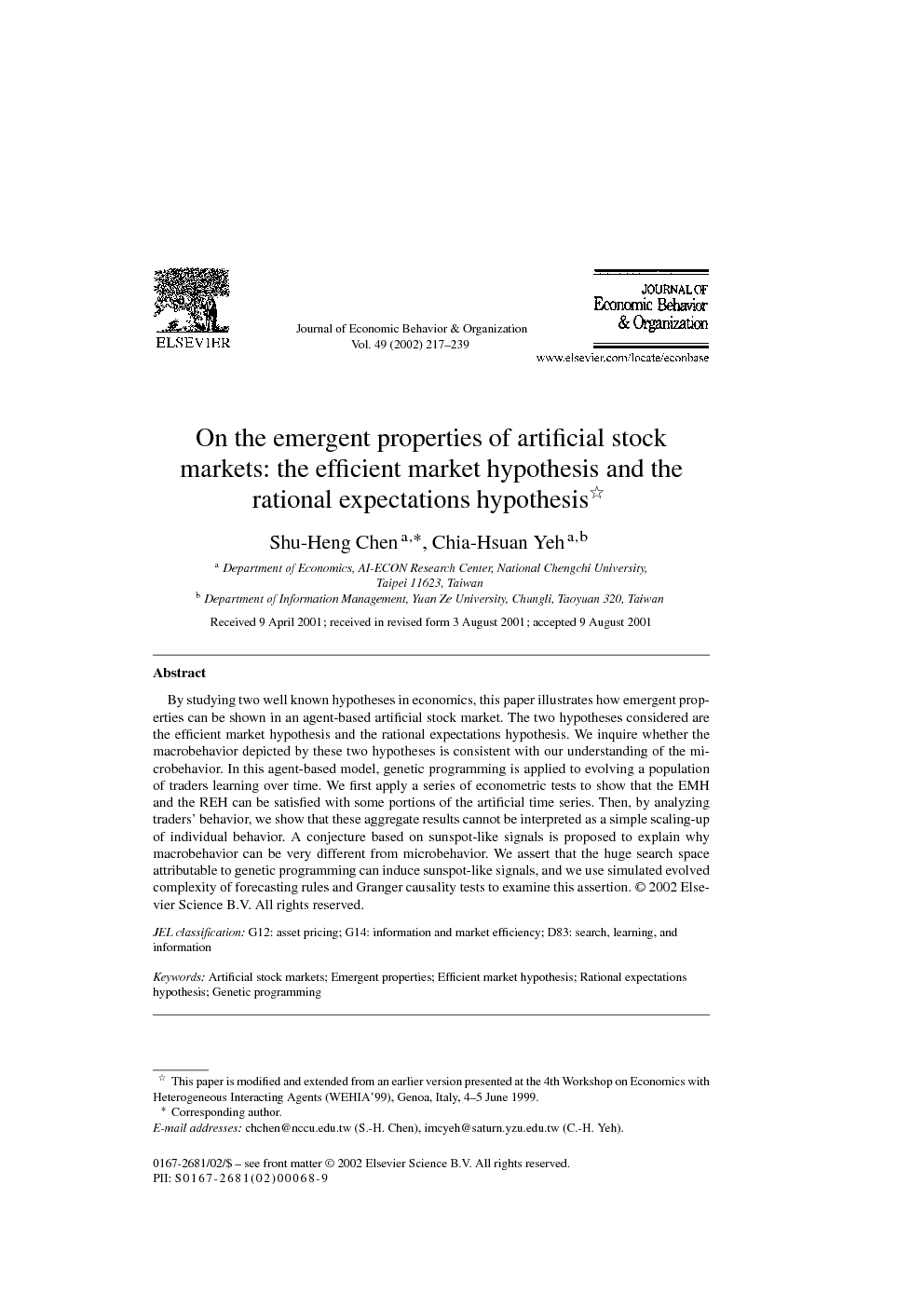 By studying two well known hypotheses in economics, this paper illustrates how emergent properties can be shown in an agent-based artificial stock market. The two hypotheses considered are the efficient market hypothesis and the rational expectations hypothesis. We inquire whether the macrobehavior depicted by these two hypotheses is consistent with our understanding of the microbehavior. In this agent-based model, genetic programming is applied to evolving a population of traders learning over time. We first apply a series of econometric tests to show that the EMH and the REH can be satisfied with some portions of the artificial time series. Then, by analyzing traders’ behavior, we show that these aggregate results cannot be interpreted as a simple scaling-up of individual behavior. A conjecture based on sunspot-like signals is proposed to explain why macrobehavior can be very different from microbehavior. We assert that the huge search space attributable to genetic programming can induce sunspot-like signals, and we use simulated evolved complexity of forecasting rules and Granger causality tests to examine this assertion.

By following some standard or modern econometric procedures, this paper examines the aggregate behavior of time series generated by an agent-based artificial stock market. The tests show that some series examined cannot reject a version of the efficient market hypothesis or a version of the rational expectations hypothesis. Thus, we illustrate, to a certain extent, how agent-based models are capable of replicating some well known economic behavior empirically. However, the properties shown as aggregate results can be quite different from what we observe from the individual behavior. In this paper, the aggregate result of the efficient market can be generated from a collection of interacting traders, most of whom do not believe in the martingale hypothesis (the efficient market hypothesis). Moreover, the aggregate result of the rational expectations can be generated from a collection of boundedly rational agents who behave as if they were never sure about the true model and were continuously searching for a better forecasting model. As a result, the aggregate results are not anticipated from simple scaling-up of the individuals, which is what one may call emergent properties in the literature. We would like to make a few final remarks about the work done in this study. Firstly, this paper can be read as an extension of the research line stressing that macroeconomic behavior is not a simple scaling-up of microeconomic behavior, e.g. Kirman (1992). More specifically, it is closely related to the agent-based computational model, populated by Epstein and Axtell (1996). This type of model allows us to trace a bottom-up path which is infeasible for conventional models built upon the device of the representative agent, and hence provides an ideal tool to show more precisely how microeconomic behavior can be quite different from macroeconomic behavior. Demonstrating the possibility of this kind of inconsistency is important because it places restrictions on inferring individual behavior from aggregate results. Such restrictions can be critical to policy issues such as decisions to launch a national annuity program based upon a test for the permanent income hypothesis. Secondly, in terms of agent-based modeling of artificial stock markets, this paper can also be related to the Santa Fe Artificial Stock Market (Arthur et al., 1997). While at this moment this field is too young to define a unified or standard framework, there are still interesting comparisons to be made. First, like the SFI approach, this paper can generate rich varieties of market dynamics. We believe that these types of models offer a promising direction to enrich current studies on microstructure and anomalies. Second, both papers show that the key to understanding the rich dynamics of markets is the mechanism which allows a population of traders to learn or adapt over time. There are lots of parameters which can result in effectively different mechanisms, and it is still in an early stage to evaluate their potential impact. But, there are also differences between the SFI approach and our approach. The main difference lies in the specific evolutionary computation (EC) technique employed. For them, it is genetic algorithms; for us, it is genetic programming. As Chen and Yeh (1996)asserted, genetic programming can be viewed as a more general way to do the job which used to be done by GAs. However, GP also has its problem when applied to modeling agents’ learning. As we have shown in this paper, GP provides us with a large search space and has a great potential to generate sunspot-like signals which can compete with simple beliefs in any finite number of data points through mutually reinforcing dynamics. While we consider this specific design relevant to the emergent properties studied in this paper, to what extent are they empirically relevant is an issue to be pursued in the future.