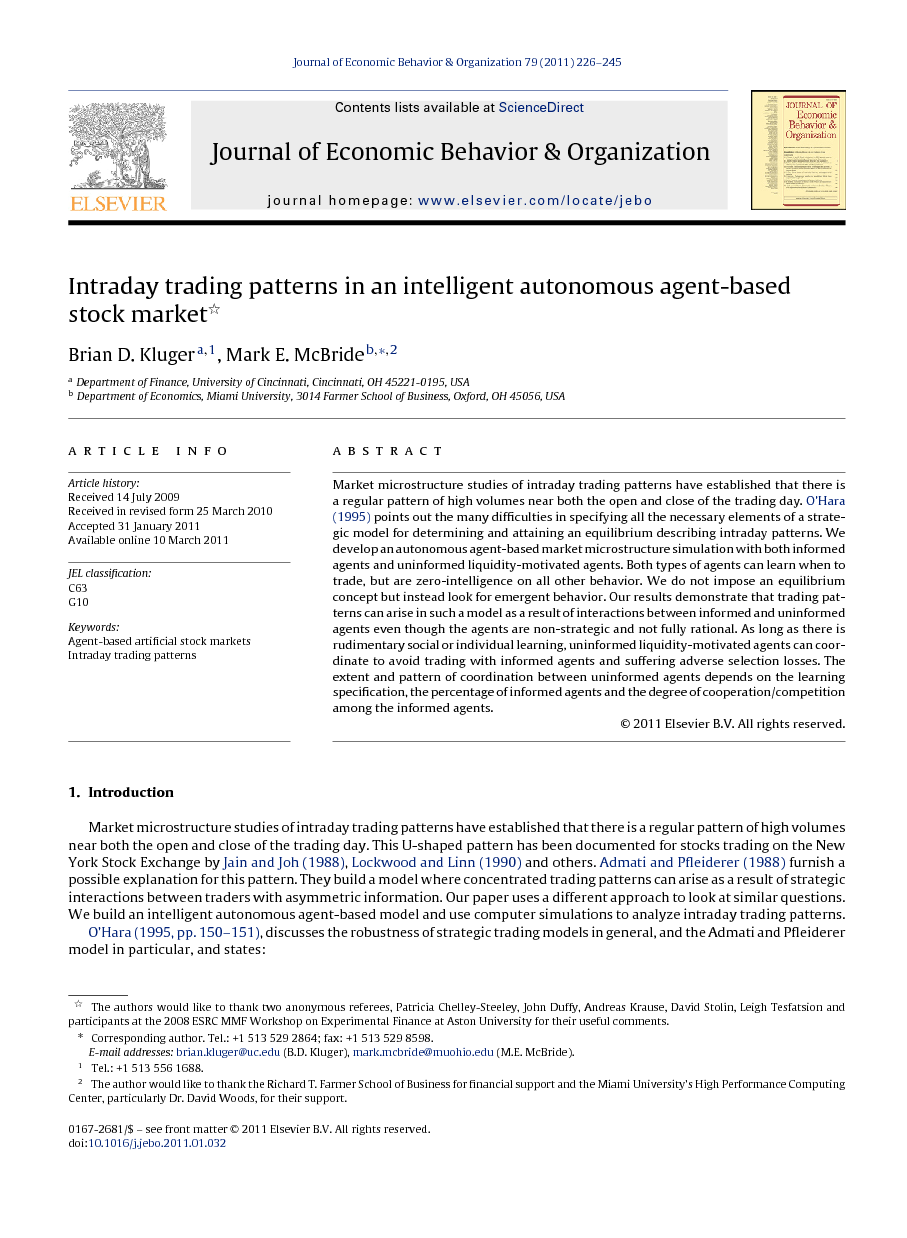 Market microstructure studies of intraday trading patterns have established that there is a regular pattern of high volumes near both the open and close of the trading day. O’Hara (1995) points out the many difficulties in specifying all the necessary elements of a strategic model for determining and attaining an equilibrium describing intraday patterns. We develop an autonomous agent-based market microstructure simulation with both informed agents and uninformed liquidity-motivated agents. Both types of agents can learn when to trade, but are zero-intelligence on all other behavior. We do not impose an equilibrium concept but instead look for emergent behavior. Our results demonstrate that trading patterns can arise in such a model as a result of interactions between informed and uninformed agents even though the agents are non-strategic and not fully rational. As long as there is rudimentary social or individual learning, uninformed liquidity-motivated agents can coordinate to avoid trading with informed agents and suffering adverse selection losses. The extent and pattern of coordination between uninformed agents depends on the learning specification, the percentage of informed agents and the degree of cooperation/competition among the informed agents.

Market microstructure studies of intraday trading patterns have established that there is a regular pattern of high volumes near both the open and close of the trading day. This U-shaped pattern has been documented for stocks trading on the New York Stock Exchange by Jain and Joh (1988), Lockwood and Linn (1990) and others. Admati and Pfleiderer (1988) furnish a possible explanation for this pattern. They build a model where concentrated trading patterns can arise as a result of strategic interactions between traders with asymmetric information. Our paper uses a different approach to look at similar questions. We build an intelligent autonomous agent-based model and use computer simulations to analyze intraday trading patterns. O’Hara (1995, pp. 150–151), discusses the robustness of strategic trading models in general, and the Admati and Pfleiderer model in particular, and states: While the outcome argued by Admati and Pfleiderer seems economically plausible, it need not be the equilibrium that actually occurs… The problem is that to characterize the actual equilibrium one would need to know not only the equilibrium concept being applied, but also the specific game being played… This problem highlights a major difficulty in applying strategic models to market microstructure issues. To formally model the underlying game in a market requires specifying the rules of the game, the players, their strategy sets, and their payoffs… Exactly how the players strategies and beliefs are tied together is crucial for determining the resulting equilibrium… Moreover, the ability to ever attain the proposed equilibrium in any actual market setting may also be a serious concern. Nonetheless, strategic models of trader behavior can provide substantial insight and intuition into the trading process.… O’Hara’s comments correspond exactly to the type of problem for which intelligent autonomous agent-based models were developed. Agent-based computational economics studies complex systems involving agents who act according to exogenously specified, relatively simple behavioral rules. The autonomous agents can adapt or learn through interactions with others and from their past experiences. The approach is to devise a simulation where autonomous agents interact and to look for emergent behavior. Further, experiments can be conducted to explain the properties of the simulated economy. We develop a system to analyze how asymmetric information might induce intraday trading patterns. Instead of the strategic modeling approach typically used by market microstructure theorists, we construct an autonomous agent-based model. Our model corresponds to typical market microstructure models in that there are two types of agents, informed agents and uninformed, liquidity-motivated agents. However, our agents learn when to trade during the day according two types of learning: a social learning using genetic algorithms and an individual learning using a modified Roth-Erev reinforcement learning algorithm. Further, our model differs from many typical market microstructure models because we do not impose an equilibrium concept. Instead, all trading occurs in the framework of a double auction. Agent-based approaches to economic modeling usually relax the assumption of perfect rationality and can allow specification of a detailed trading institution. Behavioral finance theorists usually replace rationality with a behavioral assumption (e.g., overconfidence) so that agents are rational in all respects except for the behavior of interest. As in other agent-based asset markets, our approach is to replace rationality with simple behavioral rules. Our agents are non-strategic and are near zero-intelligence. Since we are interested in intraday patterns, our agents behave randomly in all respects except for the decision of when during the day to trade. Our agents learn when to trade either through social learning or through individual learning. Even though our approach differs from Admati and Pfleiderer’s strategic trading model, our main result is quite similar. Liquidity-motivated agents learn that they can minimize losses by trying to trade at the same time during the day if there is some degree of social or individual learning. The result is important because it suggests that concentrated trading patterns can occur in environments other than those featured in many theoretical market microstructure models. Even markets with near zero-intelligence agents possessing very rudimentary learning abilities can feature concentrated trading patterns. Specification of a trading institution provides additional results as well as insights into the coordination process. In many theoretical models prices are determined by application of an equilibrium concept. Our model does not. We model trading as a process resulting from agents arriving and placing orders in a limit order book.3 When concentration and coordination occurs in our simulations, it almost always occurs in the first period of the trading day. As time progresses, profitable limit orders (from the agent accepting the order’s perspective) are likely to have already been taken off the book through orders accepted by informed agents. Liquidity-motivated agents soon discover that trading later in the day is more likely to be unprofitable. Our simulated economy is a dynamic model which can be used to study the process as well as the conditions under which both concentration and coordination occur. The organization of our paper is as follows. Section 2 summarizes previous research. Section 3 describes our autonomous agent-based model, and presents the experimental design for characterizing the economy. Our results are presented in Section 4, and Section 5 concludes.

Our results demonstrate that trading patterns can arise in an autonomous agent-based model as a result of interactions between informed and uninformed agents. Trading strategies can be measured directly through observation of agents’ timing chromosomes. In a wide range, but not for all model specifications, uninformed agents can successfully coordinate to avoid trading with informed agents and suffering adverse selection losses. Trading volumes and profits generated during the simulations are consistent with these results. The economic intuition underlying coordination in our agent-based model is the same in spirit as Admati and Pfleiderer’s theoretical insight. Attempting to trade at the same time allows uninformed agents to avoid adverse selection losses. However, our agents are not rational, strategic optimizers. They have nearly zero intelligence. Our model does not use an equilibrium concept. Still, we observe coordination with uninformed agents going to market at the start of the trading day. Further, our agent-based model also details a dynamic process leading to the coordinated pattern of trade. In our model trade is concentrated at the start of the trading day. If an uninformed agent arrives later in the trading day, informed agents will have had more time to accept favorable limit orders. Arriving later in the trading day therefore results in a greater likelihood that all remaining bids and asks will be unprofitable (from the viewpoint of the arriving agent) to accept. So uninformed agents learn to arrive early. Of course, varying parameters can affect the likelihood of coordination. Social learning is especially important. We find partial coordination with smaller learning groups and more complete coordination with larger learning groups. With individual learning coordination depends critically on the recency parameter. If uninformed agents overweight recent days’ profits and underweight older experiences, then coordination fails. But with lower recency values, coordination is nearly complete. In addition to providing evidence that very rudimentary learning can result in concentrated patterns of trade, agent based models can be used to study additional questions. There is no shortage of ideas for extensions of the model. For example, in our model all information arrives just prior to the start of the trading day. Our model could be extended to allow for information to arrive at different times or even randomly during the day. Another possible extension could involve generalizing the competitive and cooperative treatments for the informed agents. A generalized treatment might allow informed traders to learn whether or not to place limit orders, making the competitive or cooperative feature endogenous. Another, more major refinement might be to program agents to be a little more intelligent, allowing them to learn about asset value and trade timing simultaneously. With this feature, it would also be interesting to construct an economy to study both interday and intraday trading patterns. Interday patterns in our simulations are not meaningful because the true asset value is reset at the start of every trading day. While this design choice greatly simplifies our model, we may well be eliminating some important features. For example, our simulations do obtain the concentration of trading at the start of the day, but do not obtain the full U-shaped pattern observed in many markets. It seems plausible that the end-of-day concentration of trade and the U-shaped pattern might be produced if agents are made to consider their positions at the start of the following day. Perhaps these and other model modifications will prove to be both feasible and instructive. Market microstructure models (e.g., Admati and Pfleiderer, 1988) predict concentrated trading. These strategic trader models characterize equilibria, but are silent as to how such equilibria might be attained in actual markets. In our model coordination takes place through trading in a double auction environment. Further, coordination may occur even when agents are zero intelligence with regard to prices, and can only learn about when to trade. Our simulation results also show that partial coordination can occur. The degree of coordination depends upon learning parameters such as recency or group size, and can vary even within sets of thirty runs with the same parameter specifications.