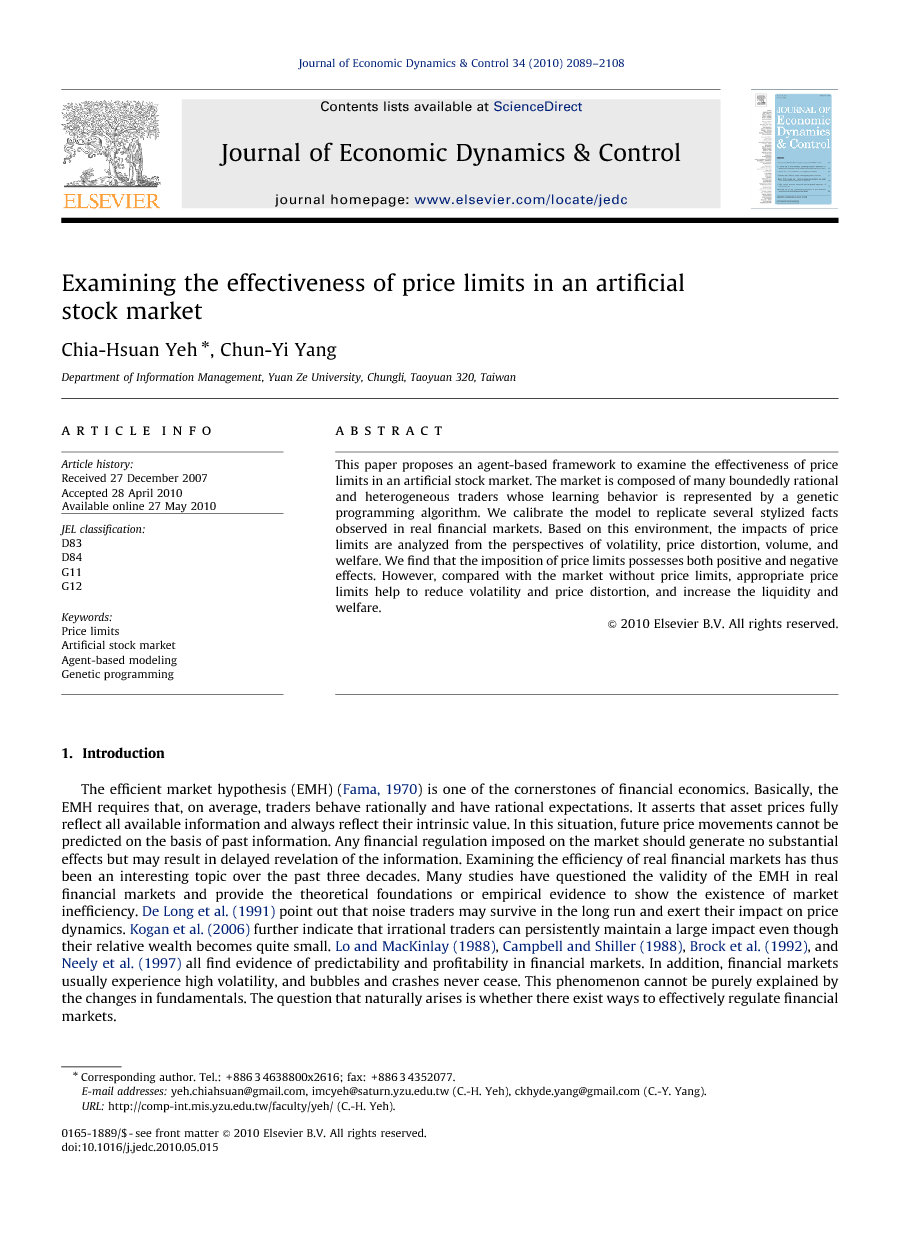 This paper proposes an agent-based framework to examine the effectiveness of price limits in an artificial stock market. The market is composed of many boundedly rational and heterogeneous traders whose learning behavior is represented by a genetic programming algorithm. We calibrate the model to replicate several stylized facts observed in real financial markets. Based on this environment, the impacts of price limits are analyzed from the perspectives of volatility, price distortion, volume, and welfare. We find that the imposition of price limits possesses both positive and negative effects. However, compared with the market without price limits, appropriate price limits help to reduce volatility and price distortion, and increase the liquidity and welfare.

This paper examines the effectiveness of price limits under the framework of bounded rationality and agent-based modeling. We find that price limits have both positive and negative effects on the market. On the positive side, under appropriate price limit levels, volatility and distortion are reduced, and liquidity is improved. The main reasons for this are as follows. In reality, traders are characterized by bounded rationality. They are unaware of the intrinsic value of the asset. The available information that traders can use to infer the fundamental value of the asset is usually insufficient or imperfect. Traders then modify their forecasts on the basis of current information in that the anchoring effect comes into play. This part has been overlooked by the people who opposed the price limit rules. In addition, Kodres and O’Brien (1994) mention that market imperfections may be the reason why circuit breakers will be positive. One of the market imperfections is the market's limited capacity to absorb massive one-sided shocks. Therefore, it is not surprising that the imposition of price limits has substantial and positive impacts such as lower market volatility and price distortion, and higher welfare. However, price limits also generate negative effects on the market, i.e. they distort traders’ expectations and inhibit traders’ abilities in figuring out the intrinsic value of the stock. Under inappropriate ranges of price limits, the negative impact may overwhelm the positive. The question that remains is how to select appropriate price limits to achieve the policy goal. The decision should be made after taking into consideration the need to maintain a balance between the market instability and the distortion regarding traders’ expectations. Besides, the impact of price limits on market liquidity exhibits a non-monotonic feature, so that policy-makers should consider how a change in price limits affects traders’ heterogeneity in expectations and also take the bid-ask spread into account. Of course, our results are closely related to the way in which the traders’ behavior is modeled, which is quite important in the framework of bounded rationality. Therefore, it is very normal to ask whether these results will change under different modelings of traders’ rationality. This, however, is left to future research.