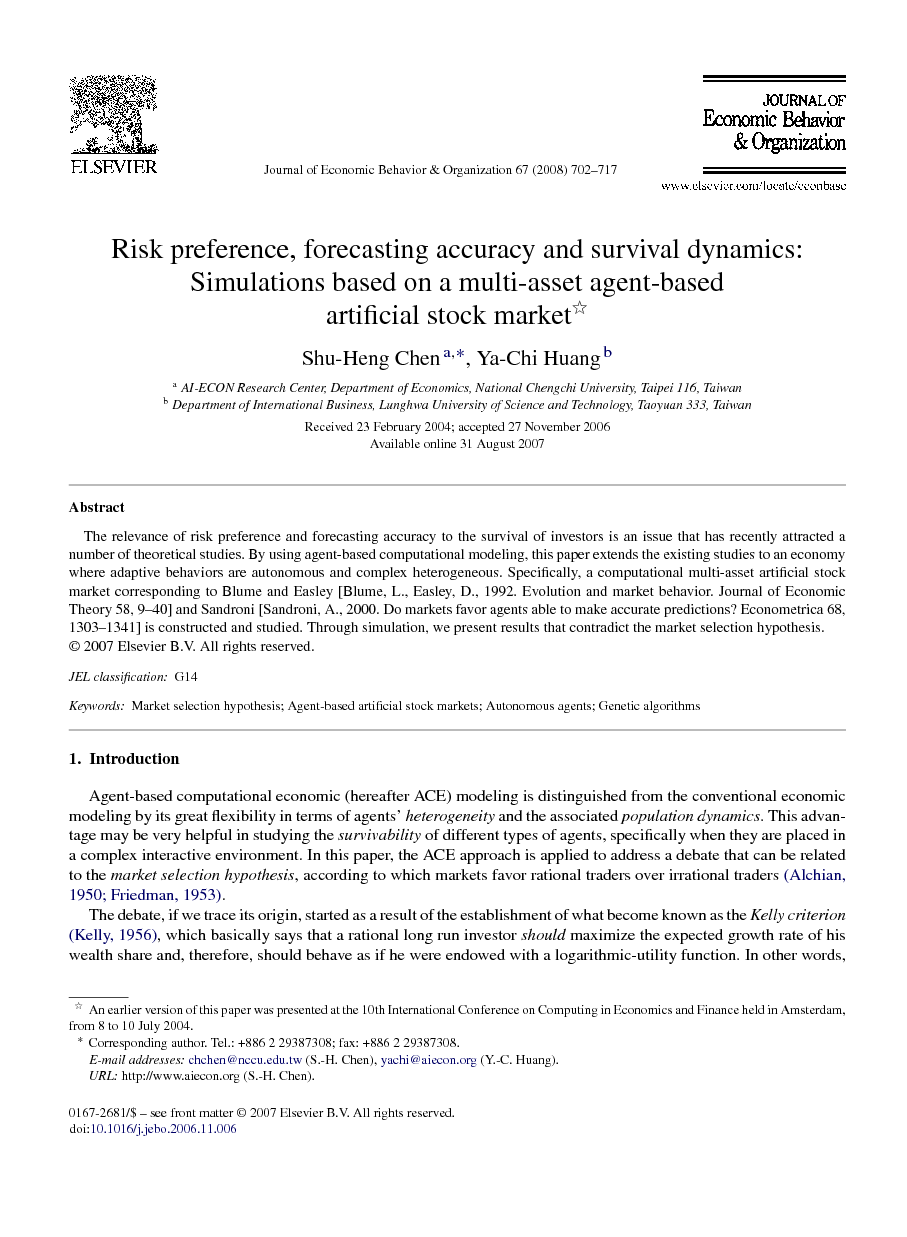 The relevance of risk preference and forecasting accuracy to the survival of investors is an issue that has recently attracted a number of theoretical studies. By using agent-based computational modeling, this paper extends the existing studies to an economy where adaptive behaviors are autonomous and complex heterogeneous. Specifically, a computational multi-asset artificial stock market corresponding to Blume and Easley [Blume, L., Easley, D., 1992. Evolution and market behavior. Journal of Economic Theory 58, 9–40] and Sandroni [Sandroni, A., 2000. Do markets favor agents able to make accurate predictions? Econometrica 68, 1303–1341] is constructed and studied. Through simulation, we present results that contradict the market selection hypothesis.

Earlier theoretical studies have already shown the irrelevance of risk preference to survivability. They have also shown that what matters is forecasting accuracy. After introducing bounded-rational behavior, we have almost the opposite: risk preference matters, and it is even more important than forecasting accuracy. Why does risk preference matter? The paper examines three interdependent possibilities: forecasting accuracy, portfolio, and saving among different types of bounded-rational agents. While being bounded rational, all of these agents are at least potentially equally smart in the sense that they are all equipped with the same adaptive search scheme, namely, the genetic algorithm. The neutrality of GA, in that GA does not make one type of agent smarter than the others, is also supported in Sections 5.1.2 and 5.1.4. Therefore, the forecasting accuracy and portfolio performance are excluded, and what is left is only the saving behavior. Therefore, the significance of risk preference is manifested by the saving behavior. While earlier studies recognized the importance of saving behavior to this issue, the attention has been restricted to the rational-equilibrium path. Various moments of saving behavior are not a concern as long as they are on the rational-equilibrium path. However, when they are not, this paper shows that such moments have strong implications for survivability. In addition to the first moment, which has already been explicitly noticed by Blume–Easley–Sandroni, we also find the significance of other high-order moments. Downside saving rates as well as the dispersion of saving rates can both be important. Since the saving decision in general is dependent upon the belief, errors in forecasting accuracy can propagate through the saving decision and manifest themselves in moments of saving. This observation generally applies to all types of agents, except type-1 agents, the log-utility agents, whose saving decisions are independent of their beliefs and are only determined by the exogenously given discount rate. That is what makes the log-utility agent so different from other agents. The conventional wisdom characterized by the Kelly criterion also works on this, but has not successfully established its validity, in particular, in the general equilibrium context. This paper shows that incorporating learning dynamics is one way of demonstrating its validity.