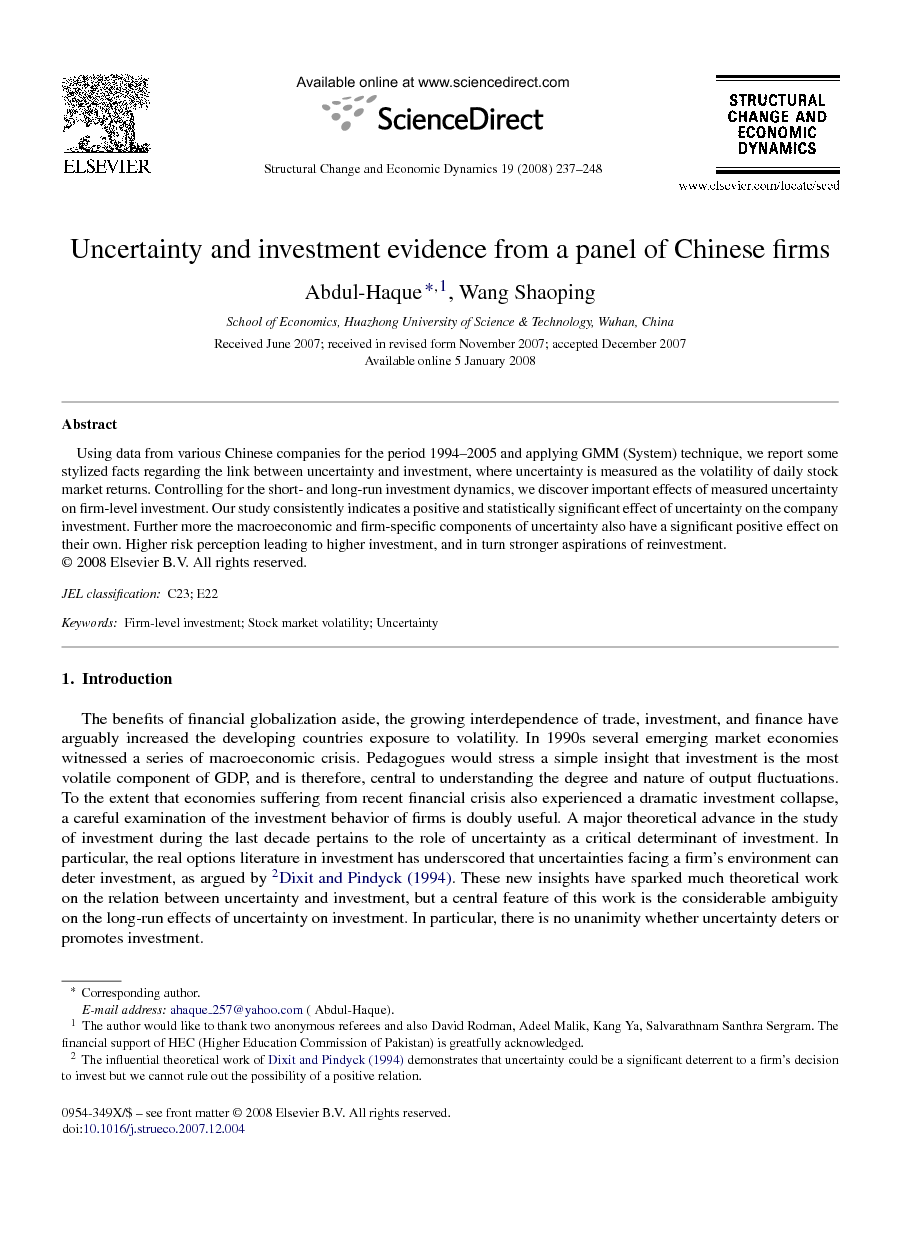 Using data from various Chinese companies for the period 1994–2005 and applying GMM (System) technique, we report some stylized facts regarding the link between uncertainty and investment, where uncertainty is measured as the volatility of daily stock market returns. Controlling for the short- and long-run investment dynamics, we discover important effects of measured uncertainty on firm-level investment. Our study consistently indicates a positive and statistically significant effect of uncertainty on the company investment. Further more the macroeconomic and firm-specific components of uncertainty also have a significant positive effect on their own. Higher risk perception leading to higher investment, and in turn stronger aspirations of reinvestment.

This study empirically investigates the impact of uncertainty on firm-level investment in China, using an unbalanced panel for the period 1994–2005. By using an error correction model of investment, a composite measure of uncertainty, constructed as the standard deviation of daily stock returns it considers the relevance of stock market volatility to investment decisions. We find that a higher level of uncertainty is associated with higher investment. Regardless of how we estimate it, we get a positive and statistically significant effect for measured uncertainty. This positive effect of uncertainty is obtained after controlling for short- and long-run investment dynamics and is robust to a host of different alternations. In particular, we experiment with a number of alternatives to ensure that our uncertainty variable is not an artifact of omitted investment dynamics. The study uncovers the Chinese investment attitude, higher risk perception led to higher investment performance and in turn stronger aspirations of reinvestment. It accounts for the arbitrage, frequent and short-term stock-trading behaviors adopted by Chinese individual investors to speculate in stock market12. This kind of speculative investment behavior is sometimes a useful way to win in the Chinese Stock Market (Song, 2003). Contrary to Bloom et al. (2001) and Bond and Cummins (2004), there is no evidence to support the suggestion that firms display a weaker response to demand shocks at higher levels of uncertainty. In our estimations, the coefficient of an interaction of sales growth with measured uncertainty remains insignificant at conventional level and does not provide information in either direction. Moreover a decomposition of uncertainty into firm, time, and residual components reveals that it is the firm component that contains the most information. In conclusion, uncertainty at least as measured by the volatility of stock market returns has a pronounced effect on company investment in China and the effect is quantitatively important. The inability to pin down a precise source of uncertainty is partly a consequence of using a more general measure of uncertainty based on stock market returns. But a composite measure of uncertainty is both strength as well as a weakness. If apriori we lack an adequate knowledge of the source of uncertainty most relevant for investment, arbitrarily choosing a specific notion of uncertainty may be problematic. Not to say that constructing a narrower and more specific measure of uncertainty remains an uphill task. In this sense, by capturing the market’s perception of a firm’s value, the composite measure tries to capture all sources of uncertainty, and is thus strength. This can be particularly useful when our primary interest lies in establishing the direction of the uncertainty–investment relationship. Once it is established that, other things being equal, a higher level of uncertainty is associated with higher investment, it is pertinent to ask what kinds of uncertainty matter more than others. Thiswould be particularly relevant for evaluating different theories and for guiding effective policy advice. From this perspective, a composite uncertainty measure remains a weakness, and offers a first approximation, at best. Constructing more refined measures of uncertainty and developing convincing empirical frameworks for testing the investment–uncertainty links therefore remains an important challenge for future research. Moreover, a key path forward is to define innovative criteria for cross-sectional heterogeneity. The results of this study are informative concerning policy implications. Nevertheless, the above findings should not be interpreted as a permanent feature of future investment behavior in China. A major challenge is that the market has grown extremely large, extremely quickly. Generally better explanatory power is provided with the more recent data used in this study, suggesting that the Chinese markets may be maturing and growing well. Thus prior studies that utilized data from earlier periods ought to be interpreted with some caution.