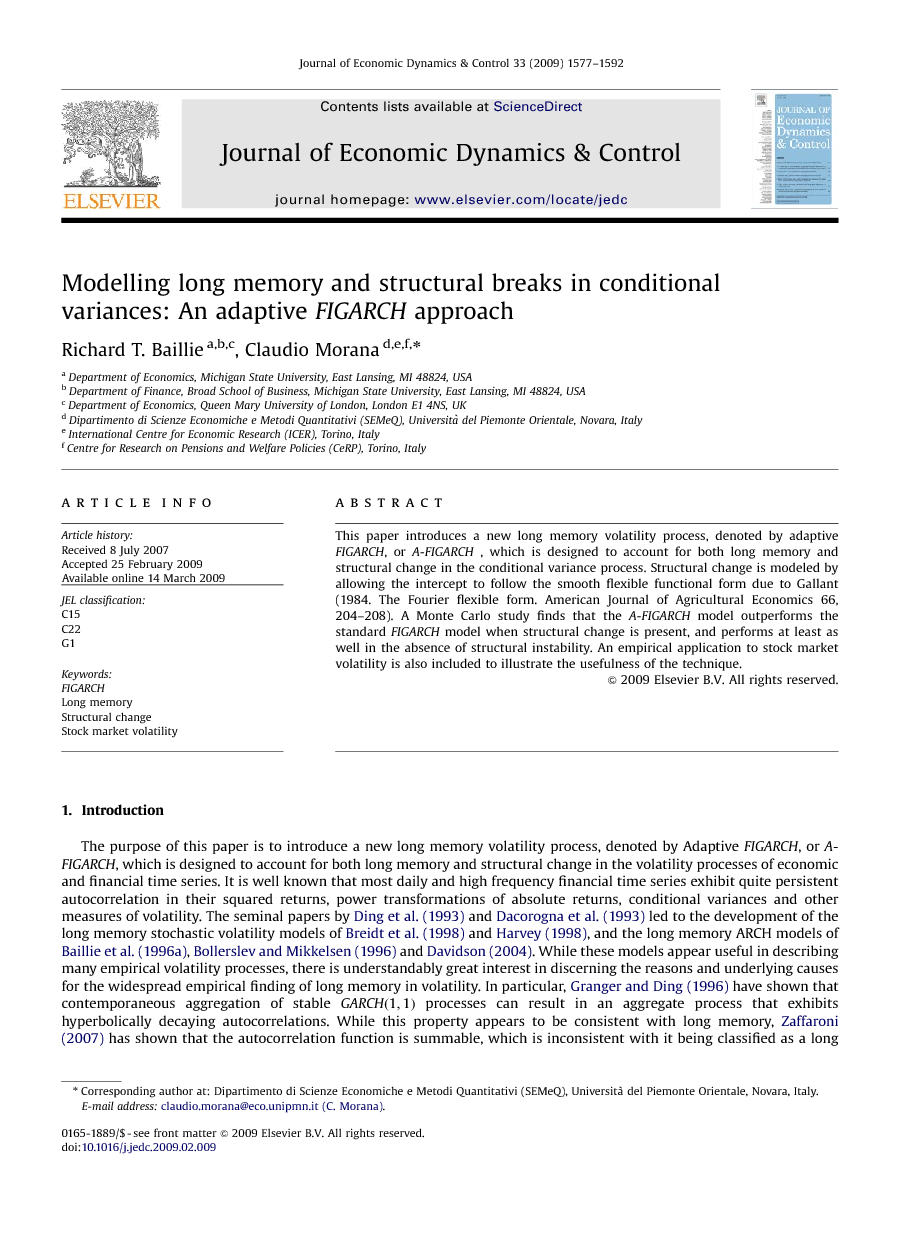 This paper introduces a new long memory volatility process, denoted by adaptive FIGARCH, or A-FIGARCH , which is designed to account for both long memory and structural change in the conditional variance process. Structural change is modeled by allowing the intercept to follow the smooth flexible functional form due to Gallant (1984. The Fourier flexible form. American Journal of Agricultural Economics 66, 204–208). A Monte Carlo study finds that the A-FIGARCH model outperforms the standard FIGARCH model when structural change is present, and performs at least as well in the absence of structural instability. An empirical application to stock market volatility is also included to illustrate the usefulness of the technique.

The purpose of this paper is to introduce a new long memory volatility process, denoted by Adaptive FIGARCH, or A-FIGARCH, which is designed to account for both long memory and structural change in the volatility processes of economic and financial time series. It is well known that most daily and high frequency financial time series exhibit quite persistent autocorrelation in their squared returns, power transformations of absolute returns, conditional variances and other measures of volatility. The seminal papers by Ding et al. (1993) and Dacorogna et al. (1993) led to the development of the long memory stochastic volatility models of Breidt et al. (1998) and Harvey (1998), and the long memory ARCH models of Baillie et al. (1996a), Bollerslev and Mikkelsen (1996) and Davidson (2004). While these models appear useful in describing many empirical volatility processes, there is understandably great interest in discerning the reasons and underlying causes for the widespread empirical finding of long memory in volatility. In particular, Granger and Ding (1996) have shown that contemporaneous aggregation of stable GARCH(1,1)GARCH(1,1) processes can result in an aggregate process that exhibits hyperbolically decaying autocorrelations. While this property appears to be consistent with long memory, Zaffaroni (2007) has shown that the autocorrelation function is summable, which is inconsistent with it being classified as a long memory process. A related argument of Andersen and Bollerslev (1997) shows how the contemporaneous aggregation of weakly dependent information flow processes can produce the property of long memory in volatility. A further justification is provided by Muller et al. (1997), who suggest that long memory in volatility can arise from the reaction of short-term dealers to the dynamics of a proxy for the expected volatility trend (coarse volatility), which causes persistence in the higher frequency volatility or (fine volatility) process. While the above papers were concerned with the underlying causes of long memory volatility, other studies have essentially been more skeptical about the validity of the finding of the long memory property in volatility. In particular, it has been suggested that various types of structural change can explain extreme persistence of volatility, and can also generate a series that appears to have long memory. In particular, Mikosch and Starica (1998) and Granger and Hyung (2004) have presented theoretical and simulation evidence that spurious long memory can be detected from a time series with breaks. Moreover, while Granger and Hyung (2004) have found that an occasional breaks model provides an inferior forecasting performance than a long memory model for S&P500 absolute returns, for the same series Starica and Granger (2005) have found that a non-stationary model, allowing for breaks in the unconditional variance, can outperform a long memory model in forecasting, but not at short horizons. 1 Furthermore, Diebold and Inoue (2001) have shown how Markov switching processes could generate long memory in the conditional mean, while Granger and Terasvirta (1999) have shown that a process that switches in sign has the characteristics of long memory. The possible occurrence of structural breaks in conditional variance processes, generating extreme persistence of the IGARCH form, appears to have been originally suggested by Lamoreaux and Lastrapes (1990) and Diebold (1986). Theoretical explanations for the above findings have been provided in Morana (2002) and Hillebrand (2005), and studies by Lobato and Savin (1998), Beran and Ocker (1999), Beine and Laurent (2000), Morana and Beltratti (2004) and Martens et al. (2004) have suggested that an appropriate model for the volatility of financial returns should include the joint occurrence of long memory and structural change. These studies are generally consistent with the previous literature such as Hamilton and Susmel (1994), 2 which considered alternating regimes of high and low volatilities, each one being characterized by strong persistence in their fluctuations. Economic explanations of the phenomenon have been suggested by Schwert (1989), who relates alternating volatility regimes to fluctuations in fundamental uncertainty and leverage effects over the business cycle. Also, Beltratti and Morana (2006) relate breaks in stock market volatility to macroeconomic volatility, possibly determined by monetary policy reactions in response to business cycle conditions; while Engle and Rangel (2008) emphasize the role of market size in addition to macroeconomic uncertainty. Given the above summary of the previous research, this present paper starts from the proposition that both long memory and structural breaks are likely to be present in the volatility processes of many economic and financial time series. Its main contribution is then to present a model which allows for both long memory and structural change in a volatility process. The proposed model is named Adaptive FIGARCH, or A-FIGARCH, and augments the standard FIGARCH model of Baillie et al. (1996a) with a deterministic component, following Gallant (1984)'s flexible functional form. Hence, the A-FIGARCH model allows for a stochastic long memory component and a deterministic break process component. The approach does not require pre-testing for the number of break points; nor does it require any smooth transition between volatility regimes; and has the advantage of being computationally straightforward. 3 The rest of this paper is organized as follows. Section 2 introduces the A-FIGARCH model and its theoretical properties. Section 3 presents some Monte Carlo evidence for inference in the model and Section 4 presents an empirical application based on equity market returns. The paper ends with a short concluding section.