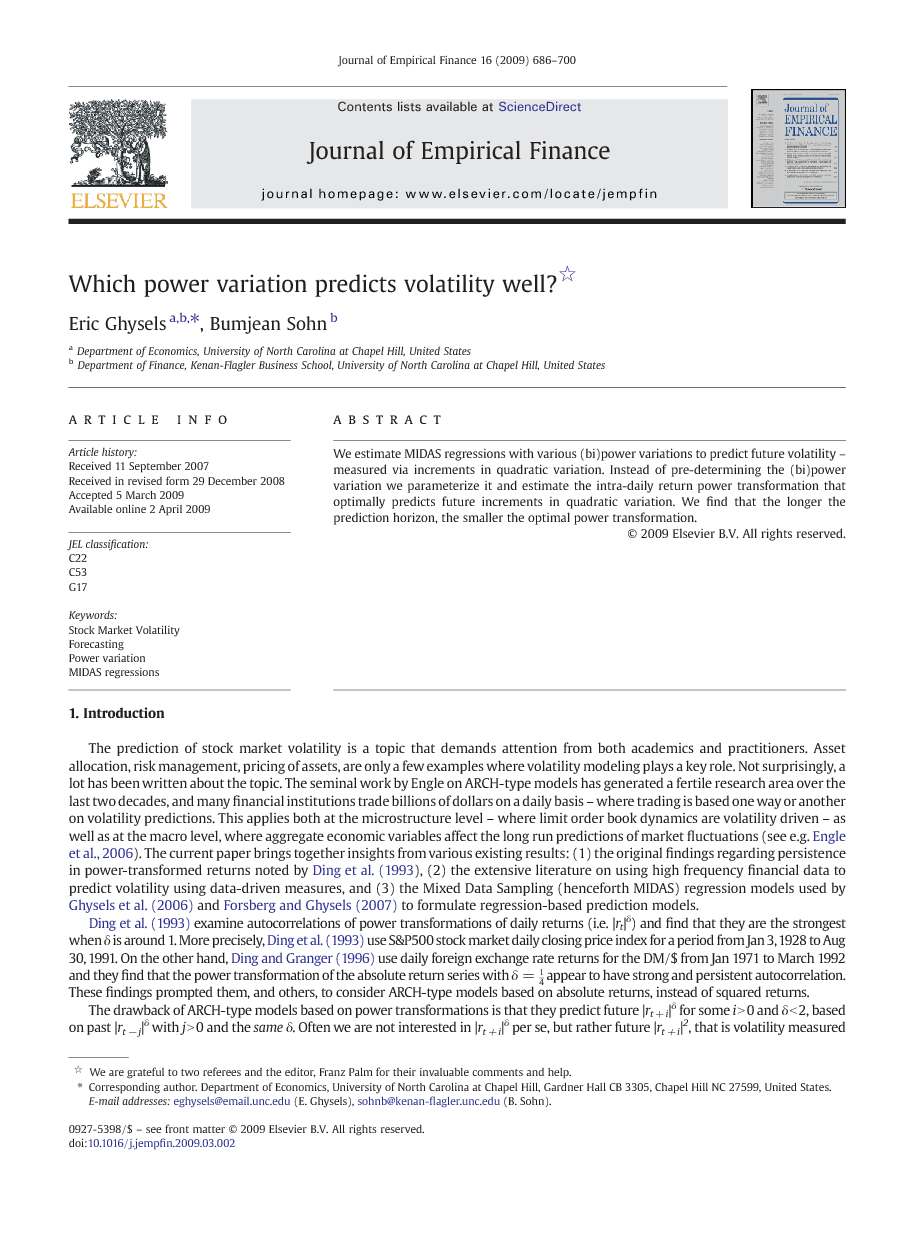 We estimate MIDAS regressions with various (bi)power variations to predict future volatility – measured via increments in quadratic variation. Instead of pre-determining the (bi)power variation we parameterize it and estimate the intra-daily return power transformation that optimally predicts future increments in quadratic variation. We find that the longer the prediction horizon, the smaller the optimal power transformation.

The prediction of stock market volatility is a topic that demands attention from both academics and practitioners. Asset allocation, risk management, pricing of assets, are only a few examples where volatility modeling plays a key role. Not surprisingly, a lot has been written about the topic. The seminal work by Engle on ARCH-type models has generated a fertile research area over the last two decades, and many financial institutions trade billions of dollars on a daily basis – where trading is based one way or another on volatility predictions. This applies both at the microstructure level – where limit order book dynamics are volatility driven – as well as at the macro level, where aggregate economic variables affect the long run predictions of market fluctuations (see e.g. Engle et al., 2006). The current paper brings together insights from various existing results: (1) the original findings regarding persistence in power-transformed returns noted by Ding et al. (1993), (2) the extensive literature on using high frequency financial data to predict volatility using data-driven measures, and (3) the Mixed Data Sampling (henceforth MIDAS) regression models used by Ghysels et al. (2006) and Forsberg and Ghysels (2007) to formulate regression-based prediction models. Ding et al. (1993) examine autocorrelations of power transformations of daily returns (i.e. |rt|δ) and find that they are the strongest when δ is around 1. More precisely, Ding et al. (1993) use S&P500 stock market daily closing price index for a period from Jan 3, 1928 to Aug 30, 1991. On the other hand, Ding and Granger (1996) use daily foreign exchange rate returns for the DM/$ from Jan 1971 to March 1992 and they find that the power transformation of the absolute return series with δ=14 appear to have strong and persistent autocorrelation. These findings prompted them, and others, to consider ARCH-type models based on absolute returns, instead of squared returns. The drawback of ARCH-type models based on power transformations is that they predict future |rt + i|δ for some i > 0 and δ < 2, based on past |rt − j|δ with j > 0 and the same δ. Often we are not interested in |rt + i|δ per se, but rather future |rt + i|2, that is volatility measured with squared returns. The question is whether we can use past |rt − j|δ with δ ≠ 2 to predict future volatility. In the current data-rich environment of high frequency financial series the question can be rephrased as follows: can we predict future increments in quadratic variation – measured as the sum of intra-daily squared returns, i.e. realized variance (henceforth RV) – with past realized power variation – where the latter are say daily sums of δ-powered absolute intra-daily returns (see Barndorff-Nielsen and Shephard (2003)) for discussion of power variation measures). The purpose of this paper is to examine whether there are indeed gains – in terms of volatility forecasting – to be made by considering past power variations where one estimates the parameter δ as part of the prediction problem. The topic of the paper is most directly related to the work of Forsberg and Ghysels (2007) who study the prediction problem of future realized volatility using past absolute power variation, i.e. δ = 1. Hence, Forsberg and Ghysels (2007) do not estimate which power variation to use. In a sense, what is being investigated in the paper are the gains from letting the data decide what power variation is optimal in the context of a MIDAS regression prediction of future increments in quadratic variation. There are costs and benefits to the analysis pursued here. For example, if the optimal value is close to one, then the approach in Forsberg and Ghysels (2007) may still dominate as estimation uncertainty may undo all gains from considering the explicit estimation of δ. On the other hand, if δ is indeed far away from one, then despite sampling error, we may be better off to estimate the optimal power – where optimal means yielding the best predictability in a least squares sense. It is the purpose of the paper to examine these issues. The paper is organized as follows. Section 2 introduces various volatility measures of our interest and their asymptotic properties. Section 3 investigates various correlation structure between RV and the measures introduced in Section 3 to motivate the empirical model building in Section 4. Section 4 introduces MIDAS regression framework, presents estimation results, and comparison of forecasting performance among the models. Section 5 concludes the paper.

We investigated the empirical cross-correlation structure between the current RV and lagged RPV's for various power transformations and find that it is quite strong. For the first 10 lags, RPV with δ=1 seems to show the strongest correlation with RV, beyond the 10th lag, it is RPV with δ=0.5. This feature has important implication in predicting volatility over different horizons. As the prediction horizon increases, the optimal value of δ becomes smaller. This suggests that we may want to estimate the power variation that predicts future volatility best. For both volatility measures RPV and BPV, the gains of letting power transformations be free parameters are quite large when compared with autoregressive models. However, RPV with δ fixed at 1 is good enough that the gains are very marginal for in-sample comparisons and even negative in many of out-of-sample results. These findings reinforce the results of Forsberg and Ghysels (2007).