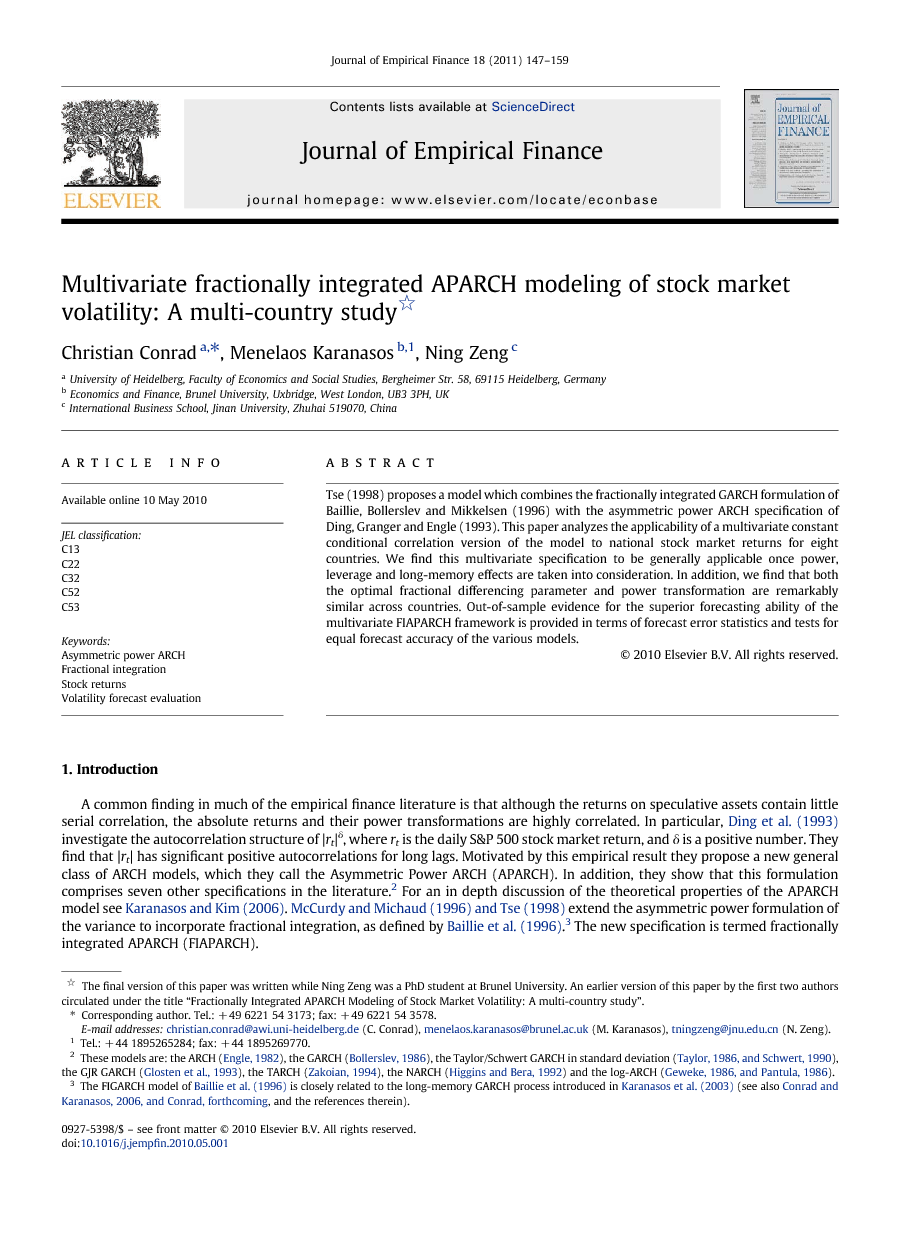 Tse (1998) proposes a model which combines the fractionally integrated GARCH formulation of Baillie, Bollerslev and Mikkelsen (1996) with the asymmetric power ARCH specification of Ding, Granger and Engle (1993). This paper analyzes the applicability of a multivariate constant conditional correlation version of the model to national stock market returns for eight countries. We find this multivariate specification to be generally applicable once power, leverage and long-memory effects are taken into consideration. In addition, we find that both the optimal fractional differencing parameter and power transformation are remarkably similar across countries. Out-of-sample evidence for the superior forecasting ability of the multivariate FIAPARCH framework is provided in terms of forecast error statistics and tests for equal forecast accuracy of the various models.

A common finding in much of the empirical finance literature is that although the returns on speculative assets contain little serial correlation, the absolute returns and their power transformations are highly correlated. In particular, Ding et al. (1993) investigate the autocorrelation structure of |rt|δ, where rt is the daily S&P 500 stock market return, and δ is a positive number. They find that |rt| has significant positive autocorrelations for long lags. Motivated by this empirical result they propose a new general class of ARCH models, which they call the Asymmetric Power ARCH (APARCH). In addition, they show that this formulation comprises seven other specifications in the literature. 2 For an in depth discussion of the theoretical properties of the APARCH model see Karanasos and Kim (2006). McCurdy & Michaud, 1996 and Tse, 1998 extend the asymmetric power formulation of the variance to incorporate fractional integration, as defined by Baillie et al. (1996). 3 The new specification is termed fractionally integrated APARCH (FIAPARCH). The FIAPARCH model increases the flexibility of the conditional variance specification by allowing (a) an asymmetric response of volatility to positive and negative shocks, (b) the data to determine the power of returns for which the predictable structure in the volatility pattern is the strongest, and (c) long-range volatility dependence. These three features in the volatility processes of asset returns have major implications for many paradigms in modern financial economics. For example, the pricing of long-term options and optimal portfolio allocations must take into account all of these three properties. At the same time, the FIAPARCH specification possesses the useful property that it nests the formulation without power effects and the stable one as special cases. This provides an encompassing framework for these two broad classes of specifications and facilitates comparison between them. The main contribution of this paper is to enhance our understanding of whether and to what extent this type of model improves upon its simpler counterparts. Brooks et al. (2000) provide evidence for the applicability of the univariate APARCH model to national stock market returns for ten countries plus a world index. The results by Tse (1998) suggest that the FIAPARCH model is applicable to the yen–dollar exchange rate. More recently, Degiannakis, 2004 and Ñíguez, 2007 have applied univariate FIAPARCH specifications to stock return data. So far, multivariate versions of the framework have rarely been used in the literature. Only Dark (2004) applies a bivariate error correction FIAPARCH model to examine the relationship between stock and future markets, and Kim et al. (2005) use a bivariate FIAPARCH-in-mean process to model the volume–volatility relationship. Therefore, an interesting research issue is to explore how generally applicable this formulation is to a wide range of financial data and whether multivariate specifications can outperform their univariate counterparts. In this paper we address this issue by estimating both univariate and multivariate versions of this framework for eight series of national stock market index returns. These countries are Canada, France, Germany, Hong Kong, Japan, Singapore, the United Kingdom and the United States. As the general multivariate specification adopted in this paper nests the various univariate formulations, the relative ranking of each of these models can be considered using the Wald testing procedures and standard information criteria. Furthermore, the ability of the FIAPARCH formulation to forecast stock volatility out-of-sample is assessed by a variety of forecast error statistics. In order to verify whether the difference between the statistics from the various models is statistically significant we employ the tests of Diebold & Mariano, 1995 and Harvey et al., 1997. The remainder of this article is structured as follows. In Section 2 we detail the univariate and multivariate FIAPARCH models and discuss the various nested ARCH specifications. Section 3 discusses the data and presents the empirical results. In Section 4 we evaluate the different specifications in terms of their out-of-sample forecast ability. Finally, Section 5 concludes the analysis.

In this paper strong evidence has been put forward suggesting that the conditional volatility of eight national stock indices is best modeled as a FIAPARCH process. On the basis of Wald tests and information criteria the fractionally integrated model provides a statistically significant improvement over its integrated counterpart. One can also reject the more restrictive stable process, and consequently all the existing specifications (see Ding et al. 1993) nested by it in favor of the fractionally integrated parameterization. Hence, our analysis has shown that the FIAPARCH formulation is preferred to both the stable and the integrated ones. Additionally, according to our analysis, all eight countries show strong evidence of power effects when long-memory persistence in the conditional volatility has been taken into account, as both the Bollerslev and Taylor/Schwert specifications were rejected in favor of the power formulation. Further, comparing the pairwise testing results of the log-likelihood rocedures to the relative model rankings provided by the four alternative criteria we observed that the findings were generally robust. That is, where the log-likelihood results provided unanimous support for the FIAPARCH specification over either the Bollerslev or Taylor/ Schwert (asymmetric) FIGARCH formulations, the model selection criteria were compatible without exception. Thus, the inclusion of a power term and a fractional unit root in the conditional variance equation appear to augment the model in a worthwhile fashion. We would also like to emphasize that the above results were robust to the dimension of the process. That is, the evidence on the superiority of the FIAPARCH specification obtained from the univariate models was reinforced by the multivariate processes. Moreover, the apparent similarity of the fractional differencing and power terms suggests that the M-FIAPARCH model has a quite general empirical validity across many different markets. Finally, our in-sample results are reinforced by a comparison of the outof-sample forecast performance of the various models, which shows that the M-FIAPARCH specification is generally preferred to its nested competitors. Finally, we would like to point to two potentially interesting extensions of the multivariate models studied in this article, namely specifications with slowly time-varying intercepts as suggested in Baillie and Morana (2009) or with volatility spillovers as considered in Conrad and Karanasos (2010).