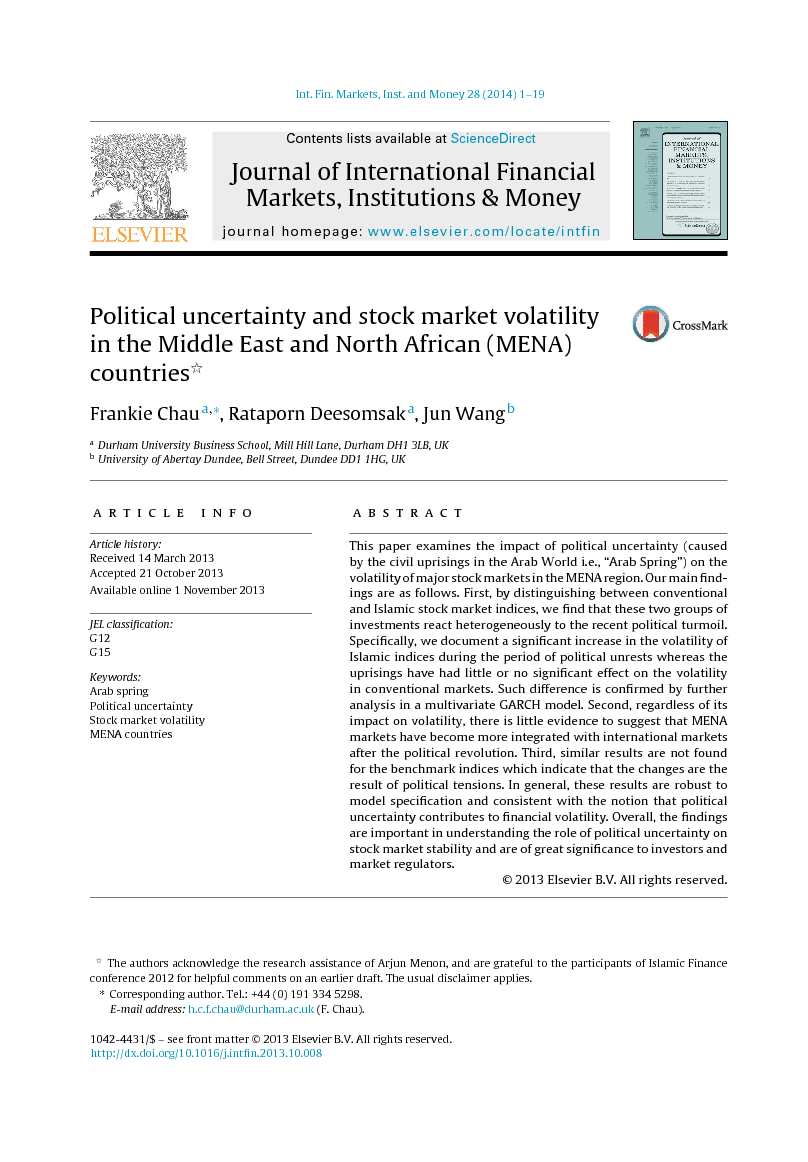 This paper examines the impact of political uncertainty (caused by the civil uprisings in the Arab World i.e., “Arab Spring”) on the volatility of major stock markets in the MENA region. Our main findings are as follows. First, by distinguishing between conventional and Islamic stock market indices, we find that these two groups of investments react heterogeneously to the recent political turmoil. Specifically, we document a significant increase in the volatility of Islamic indices during the period of political unrests whereas the uprisings have had little or no significant effect on the volatility in conventional markets. Such difference is confirmed by further analysis in a multivariate GARCH model. Second, regardless of its impact on volatility, there is little evidence to suggest that MENA markets have become more integrated with international markets after the political revolution. Third, similar results are not found for the benchmark indices which indicate that the changes are the result of political tensions. In general, these results are robust to model specification and consistent with the notion that political uncertainty contributes to financial volatility. Overall, the findings are important in understanding the role of political uncertainty on stock market stability and are of great significance to investors and market regulators.

On December 18th, 2010, a young vegetable vendor from a small town in Tunisia set himself ablaze in protest of the alleged police corruption and ill treatment. This incident reignited the political activism of the entire region, triggering a revolutionary wave of demonstrations and protests firstly in Tunisia and then elsewhere in the Arab world. These widespread protests and demands for reforms (the so-called “Arab Spring” movements) have led to varying degrees of political changes with rulers being forced from power in some countries along with changes of domestic and foreign policies in many governments.1 The opportunity for political reforms in the Middle East and North African (MENA) region brought along by Arab Spring is enormous and unprecedented. However, a major political event like this can also have an explosive effect on stock market volatility because of its economic and social implications. On the one hand, the revolutionary movements provide an opportunity for MENA countries to develop a more transparent and effective governance to unleash their economic potential. On the other hand, political uncertainty caused by the unrest could manifest itself in stock market cycles and volatility reactions shaking international investor confidence in the region.2 It is, therefore, imperative and informative to examine whether these political movements have indeed changed the political, social, and financial landscape of MENA countries. Several studies have looked at the effects of Arab Spring on the economic performance as well as the social or political environment (e.g., O'Sullivan et al., 2012 and World Bank, 2011). Yet, three years on, it remains relatively unclear whether, and to what extent, the recent political turmoil has affected the overall financial market. In this paper, we attempt to fill this gap by examining the change (if any) in MENA stock market stability and integration during the Arab Spring movements. Specifically, we seek to address the following questions: (1) Have the civil uprisings in the Arab World, i.e., “Arab Spring”, affected the financial volatility and integration of major MENA stock markets, and if so to what extent? (2) Are there any differences in the effect across two major types of investment vehicles i.e., conventional and Islamic stock indices? Given the growing importance of MENA countries in the world economy in general and the Shariah-compliant Islamic financial assets in particular, there is a pressing need for a rigorous research to examine the effects of Arab Spring conflicts in order to better understand the relationship between political uncertainty and financial volatility.3 In addition, the results of our analyses are of direct interest to financial authorities and policymakers who wish to evaluate the role of major political events in triggering or exacerbating stock price movement, and to the investors who wish to invest in emerging MENA stock markets and/or Islamic indices. Furthermore, this paper adds to the growing literature studying the determinants of stock market volatility in a number of ways. Firstly, whilst increasing evidence showing that standard economic variables perform poorly in capturing stock price movements and political uncertainty is emerging as a new avenue to explore the forces driving market movements (Erb et al., 1996 and Mei and Guo, 2004), most prior studies in this field have been primarily concerned with political events such as presidential elections, military invasions/wars and terrorists attacks. Little research has been conducted on the potential influence of an important source of political uncertainty arising from overthrown or changes in government as a result of civil uprisings.4 Using Arab Spring as a unique testing environment, this paper represents the latest attempt in assessing the effect of political turbulence on the stability of financial markets.5 Secondly, from a methodological standpoint, this paper modifies and extends on the methodology used in prior studies. In particular, following Gulen and Mayhew (2000) and Antoniou et al. (2005), we employ a GARCH-based analytical framework to account for nonsynchronous trading, conditional heteroscedasticity in returns, and an asymmetric response to positive and negative news. Moreover, rather than selecting a univariate GARCH model ad hoc (like many prior studies have done), we carry out extensive specification tests to determine the appropriate model, and then test the robustness of our results using a multivariate GARCH model. Finally, our study also takes into account a unique characteristic of Islamic financial markets, namely, the existence of both conventional and Islamic indices, and directly compares the reaction of these two groups of investments to the political turmoil. The main findings of our investigation can be summarized as follows. First, our results indicate that Arab Spring conflicts and the associated political uncertainty have increased the volatility of MENA stock markets. Second, both univariate and multivariate analyses demonstrate that the impact on stock market volatility is mainly through Islamic (not conventional) indices. Third, regardless of its impact on volatility, there is little evidence to suggest that MENA markets have become more integrated with international markets after Arab Spring. The remainder of this paper is structured as follows. Section 2 presents the research background, reviewing the related literature and key events in Arab Spring movements. Section 3 describes the data, descriptive statistics and methodologies employed; Section 4 presents and discusses the empirical results and robustness checks within both univariate and multivariate frameworks. Finally, Section 5 concludes the paper with a summary of main findings and their practical implications.

this paper, we have examined the effect of civil uprisings in the Arab World i.e., “Arab Spring”(and the associated political uncertainty) on the volatility and integration of major stock markets in theMENA region. We begin our analysis by modeling the unpredictable returns of both conventional andIslamic stock indices using various GARCH models to account for nonsynchronous trading, conditionalheteroscedasticity and asymmetric volatility responses. Our results indicate that Arab Spring and thepolitical turbulence have contributed to volatility of MENA stock markets, especially for the Islamicindices; however there is little or no significant impact on their interaction and integration with theWorld market. These results appear to be robust to model specifications and are consistent with priorstudies such as Bailey and Chung (1995) and Boutchkova et al. (2012) on other stock markets, inthat political uncertainty contributes to financial volatility. This in turn suggests that financial assetprice movement is driven, at least in part, by political events in addition to the common financial andeconomic factors (Gilpin, 2001).Overall, these findings complement to the growing literature on the relationship between politicalrisk and asset price, providing evidence on the financial impact of Arab Spring movements. We deemour results very important in contributing to the current debate on the role of political risk in assetpricing and volatility behavior, and are of great significance to regulators and international investorswho wish to invest in MENA stock markets and/or Islamic stocks. Constantly erupting political scandalstend to shake investor confidence, creating unnecessary nervousness and turbulences in the financialmarkets. It is, therefore, imperative for the new governments to restore business confidence in orderto promote the region’s financial stability and economic growth. On a more general note, our find-ings might have implications for studies on the determinants of time-varying stock return volatility(e.g., Campbell et al., 2001; Kearney and Poti, 2008). Our evidence suggests that political tension anduncertainty can trigger or exacerbate the volatility of financial markets. We suggest two directionsfor future research. First, the multivariate GARCH modeling framework used in this paper could beextended in an effort to identify the contagion effect among the MENA, the developed, and the Worldstock markets. Furthermore, since a number of studies have documented the impact of other politicalevents (e.g., elections, wars and terrorist attacks) on market volatility, a comparative assessment ofthe stock market reaction to different political events would also be an interesting area for futureresearch.