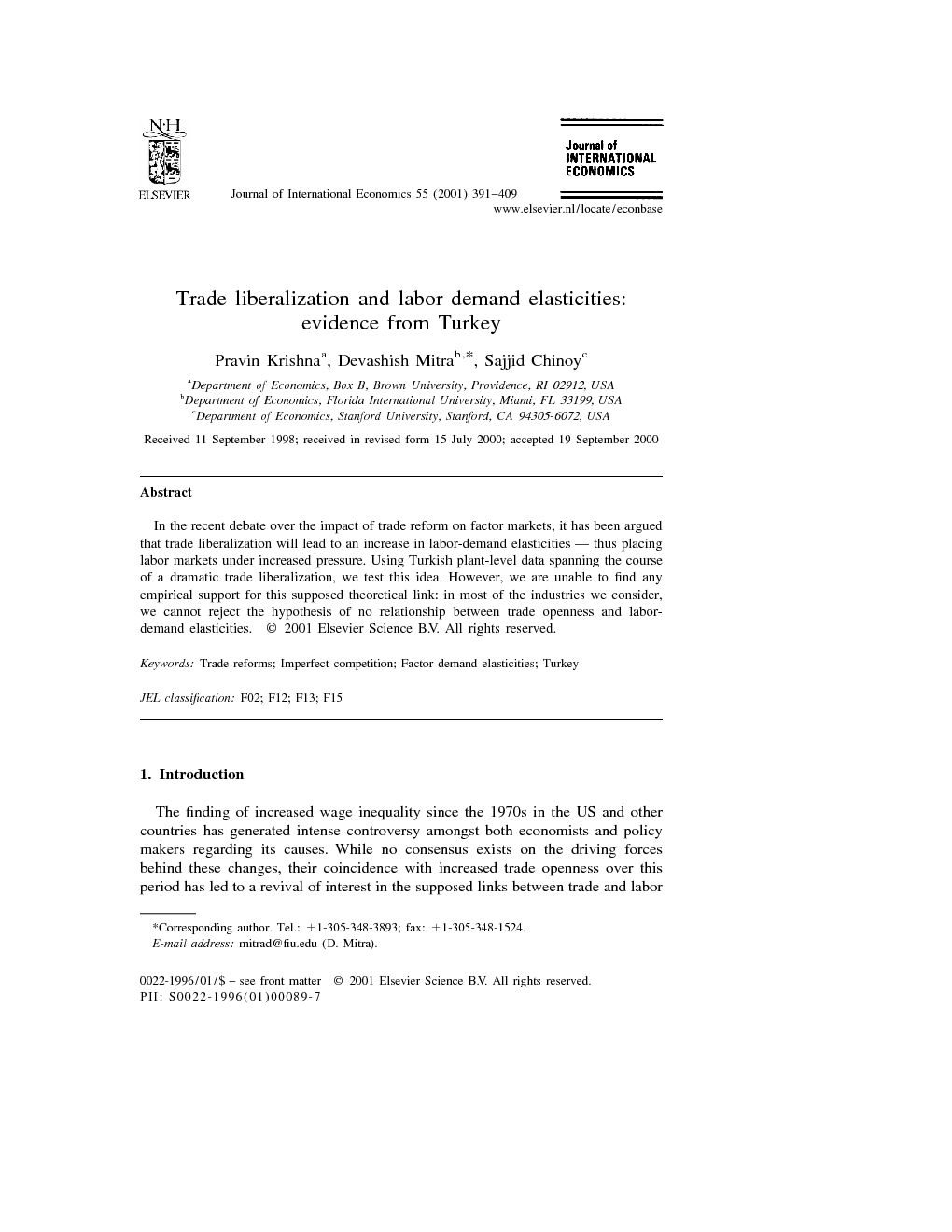 In the recent debate over the impact of trade reform on factor markets, it has been argued that trade liberalization will lead to an increase in labor-demand elasticities — thus placing labor markets under increased pressure. Using Turkish plant-level data spanning the course of a dramatic trade liberalization, we test this idea. However, we are unable to find any empirical support for this supposed theoretical link: in most of the industries we consider, we cannot reject the hypothesis of no relationship between trade openness and labor-demand elasticities.

The finding of increased wage inequality since the 1970s in the US and other countries has generated intense controversy amongst both economists and policy makers regarding its causes. While no consensus exists on the driving forces behind these changes, their coincidence with increased trade openness over this period has led to a revival of interest in the supposed links between trade and labor markets. These linkages are now being re-examined and analyzed in a large and growing theoretical and empirical literature.1 While the primary focus of this research has appropriately been on the direct impact of greater openness on employment, wages and particularly on wage inequality (between high and low-skilled workers),2 the literature (for instance, Rodrik (1997) and Slaughter (1997)) has emphasized yet another linkage between openness and labor demand: the possibility, particularly in imperfectly competitive contexts, for the elasticity of demand for labor to be higher with greater openness. As Slaughter (1997) has pointed out, the link between factor demand elasticities and product market elasticities is directly established through Hicks’ well known ‘fundamental law of factor demand’ which implies that “the demand for anything is likely to be more elastic, the more elastic is the demand for any further thing which it contributes to produce”. Since product market elasticities are likely to rise with trade liberalization, this implies that, with greater trade openness, we should see an increase in labor demand elasticities as well.3 Why do rising labor demand elasticities matter? As Rodrik (1997) notes, rising elasticities have three important consequences. First, they shift the wage or employment incidence of non-wage labor costs towards labor and away from employers. Second, higher elasticities trigger more volatile responses of wages and employment to any exogenous shocks to labor demand. Third, higher elasticities shift bargaining power over rent distribution in firms enjoying extra-normal profits away from labor and towards capital. Thus, the overall point is that moves towards openness could put labor markets under greater ‘pressure’ — an outcome that many would consider to be socially undesirable. This paper attempts to investigate the link between between trade openness and factor demand elasticities empirically.4 We start by specifying an econometrically implementable theoretical model of a firm operating in an imperfectly competitive context and derive predictions about the implications of changes in trade policy for labor demand elasticities. This is then tested using data from the Turkish manufacturing sector from a period when there were large scale changes in the level of trade protection (specifically, the trade reforms of 1984).5 This data set provides a unique opportunity to test the impact of trade policy on labor demand elasticities. It has several appealing features: First, the data span years in which the trade policy change was really quite dramatic. Thus, if it is the case that greater openness generally results in larger factor demand elasticities, we should expect to see its effects after this particular reform.6 Second, the data are of higher frequency than is typical: since manufacturing censuses are typically only conducted once every 3 or 5 years in most countries, one is usually only able to obtain two or three observations per firm in about a decade — a period over which there may typically be multiple shifts in trade policy. Thus, in most cases, extracting information about the impact of a single shift in trade policy on firms is difficult. Our data, however, are annual, thus mitigating this concern. Third, this data set has already been used previously by Levinsohn (1993) to examine the impact of the trade reforms on the competitive behavior of firms. It, thus, permits an industry by industry comparison and conciliation of product market impact with impact on labor markets. Our analysis suggests that the linkage between greater trade openness and labor demand elasticities as suggested by the theory may be empirically quite weak: in the vast majority of the industries we considered, we are unable to reject the hypothesis of no relationship between these variables. As we discuss in detail in the paper, this finding remains robust to changes in the type of labor considered (all production workers, overtime labor, externally contracted labor, female labor, etc.) and quite robust to changes in specification as well. The rest of the paper is structured as follows. Section 2 describes the Turkish reforms briefly. Section 3 outlines the basic theoretical structure and the derives the estimating equation. Section 4 describes the data. Section 5 discusses the primary econometric concerns and presents the econometric results. Section 6 discusses how we can reconcile our results with the findings of Levinsohn (1993) who finds significant impact of the trade reforms in product markets. Section 7 concludes.

Our analysis of the impact of trade reforms on labor demand elasticities using plant level data over a period spanning major trade reforms in the Turkish economy suggests that the putative linkage between greater trade openness and labor demand elasticities (as suggested by theories of the type we present in this paper) may be empirically quite weak: in the vast majority of the industries we considered separately, we are unable to find statistically and economically significant relationship between these variables. Our results are robust to the type of labor considered (contract labor, overtime labor, female workers, etc.). This non-responsiveness of labor demand elasticity in practice is perhaps explained by a variety of frictions that affect the labor demand decisions of firms.