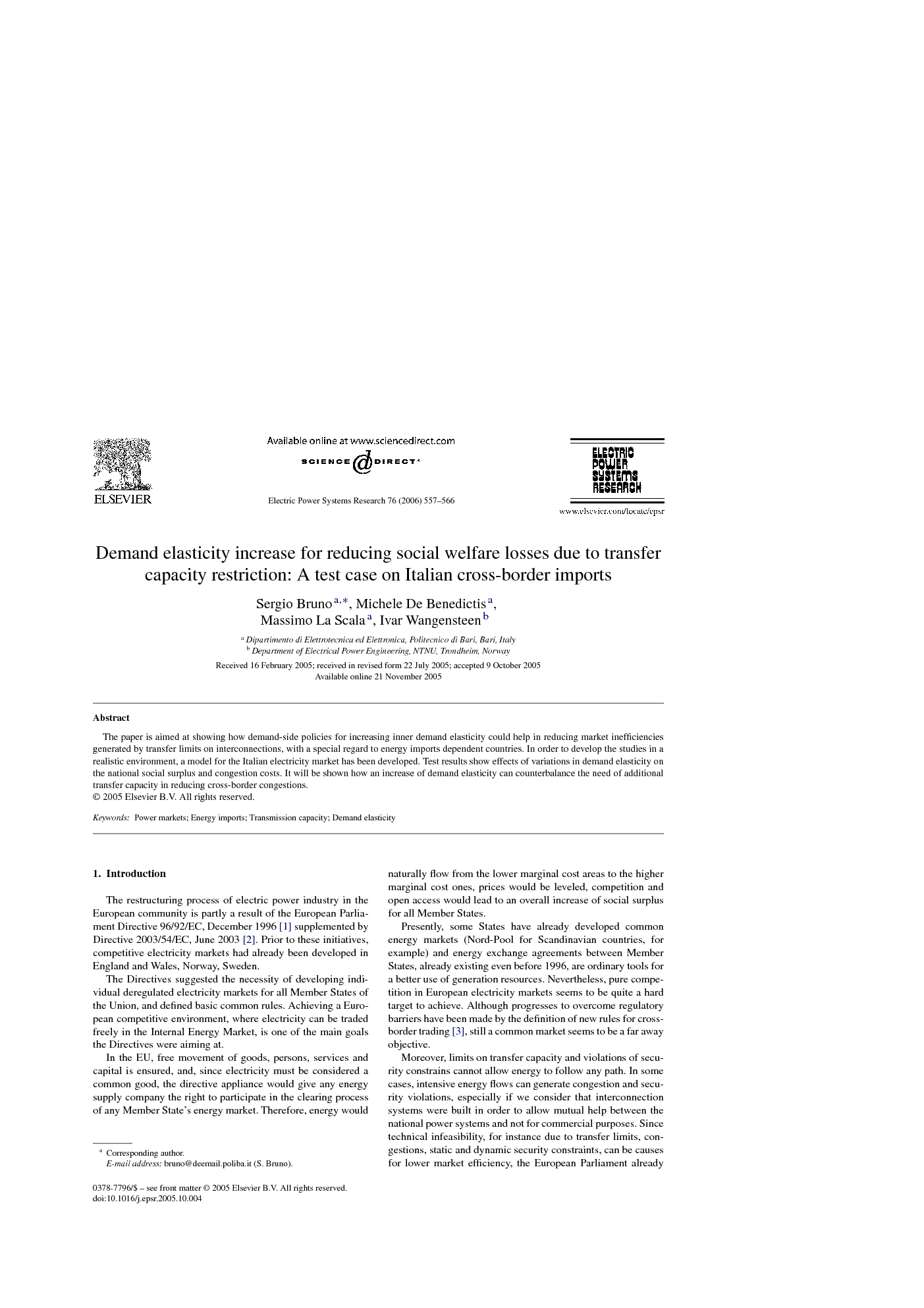 The paper is aimed at showing how demand-side policies for increasing inner demand elasticity could help in reducing market inefficiencies generated by transfer limits on interconnections, with a special regard to energy imports dependent countries. In order to develop the studies in a realistic environment, a model for the Italian electricity market has been developed. Test results show effects of variations in demand elasticity on the national social surplus and congestion costs. It will be shown how an increase of demand elasticity can counterbalance the need of additional transfer capacity in reducing cross-border congestions.

The restructuring process of electric power industry in the European community is partly a result of the European Parliament Directive 96/92/EC, December 1996 [1] supplemented by Directive 2003/54/EC, June 2003 [2]. Prior to these initiatives, competitive electricity markets had already been developed in England and Wales, Norway, Sweden. The Directives suggested the necessity of developing individual deregulated electricity markets for all Member States of the Union, and defined basic common rules. Achieving a European competitive environment, where electricity can be traded freely in the Internal Energy Market, is one of the main goals the Directives were aiming at. In the EU, free movement of goods, persons, services and capital is ensured, and, since electricity must be considered a common good, the directive appliance would give any energy supply company the right to participate in the clearing process of any Member State's energy market. Therefore, energy would naturally flow from the lower marginal cost areas to the higher marginal cost ones, prices would be leveled, competition and open access would lead to an overall increase of social surplus for all Member States. Presently, some States have already developed common energy markets (Nord-Pool for Scandinavian countries, for example) and energy exchange agreements between Member States, already existing even before 1996, are ordinary tools for a better use of generation resources. Nevertheless, pure competition in European electricity markets seems to be quite a hard target to achieve. Although progresses to overcome regulatory barriers have been made by the definition of new rules for cross-border trading [3], still a common market seems to be a far away objective. Moreover, limits on transfer capacity and violations of security constrains cannot allow energy to follow any path. In some cases, intensive energy flows can generate congestion and security violations, especially if we consider that interconnection systems were built in order to allow mutual help between the national power systems and not for commercial purposes. Since technical infeasibility, for instance due to transfer limits, congestions, static and dynamic security constraints, can be causes for lower market efficiency, the European Parliament already approved a recent proposal made by the Council of the European Union, concerning the expansions of the trans-European network (1229/2003/EC) [4]. Even though the increase of transfer capacity on interconnections is a highly sought-after objective, other policies can help in enhancing European electricity market efficiency. In the last 10 years, wholesale electricity markets have developed successfully, but active demand-side participation is still very low. The issue of how to increase the elasticity of the demand offers many possible solutions, exhaustively described in [5] along with the thorniest obstacles. In [6], Price Responsive Load programs, actually implemented by the New York Independent System Operator (NYISO) for studying the actual responsiveness of loads to prices, have been described. An improvement of demand elasticity is highly desirable since it would yield a reduction of price volatility, an overall reduction of prices and spikes, and, more generally, an improvement of market behaviour and efficiency [5]. Regarding the effects on security related issues, in [7], it has been shown how demand flexibility can also help in solving the problem of long-term availability of peaking capacity, whereas in [8], the authors investigate the role that demand responsiveness to prices can play in the presence of congestions. Results show that congestion effects are alleviated as the demand elasticity increases. In the limit case (lossless system with infinite demand elasticity) congestions are removed with no concern to which constraint has been considered. In the following, this paper shows how demand-side policies aimed to increase the elasticity of inner demand can help in reducing the market inefficiency generated by transfer limits on interconnections (i.e. social welfare losses are reduced), with a special regard to energy-import dependent countries. For these countries, the increase of demand elasticity would also help in overcoming scarcity periods, reducing the cost of energy and the dependence on imports. Results obtained through the development of a realistic model for the Italian electricity industry are presented.

The paper was aimed at showing how an increase in the elasticity of demand can help in reducing energy price and social surplus losses due to congestions. For countries that are strongly dependent on energy imports, like Italy, the development of policies for increasing demand responsiveness to price variations can also permit to delay the construction of new interconnection lines (i.e. for the enhancement of the NTC on interconnections). Increasing NTC, without new investments on transmission, is an infeasible approach due the reduction of security margins. In order to develop our studies in a realistic environment a model of the Italian power industry has been developed. The model considers all generation units presently available in Italy and actual configurations of load duration curves. Test results have been presented.