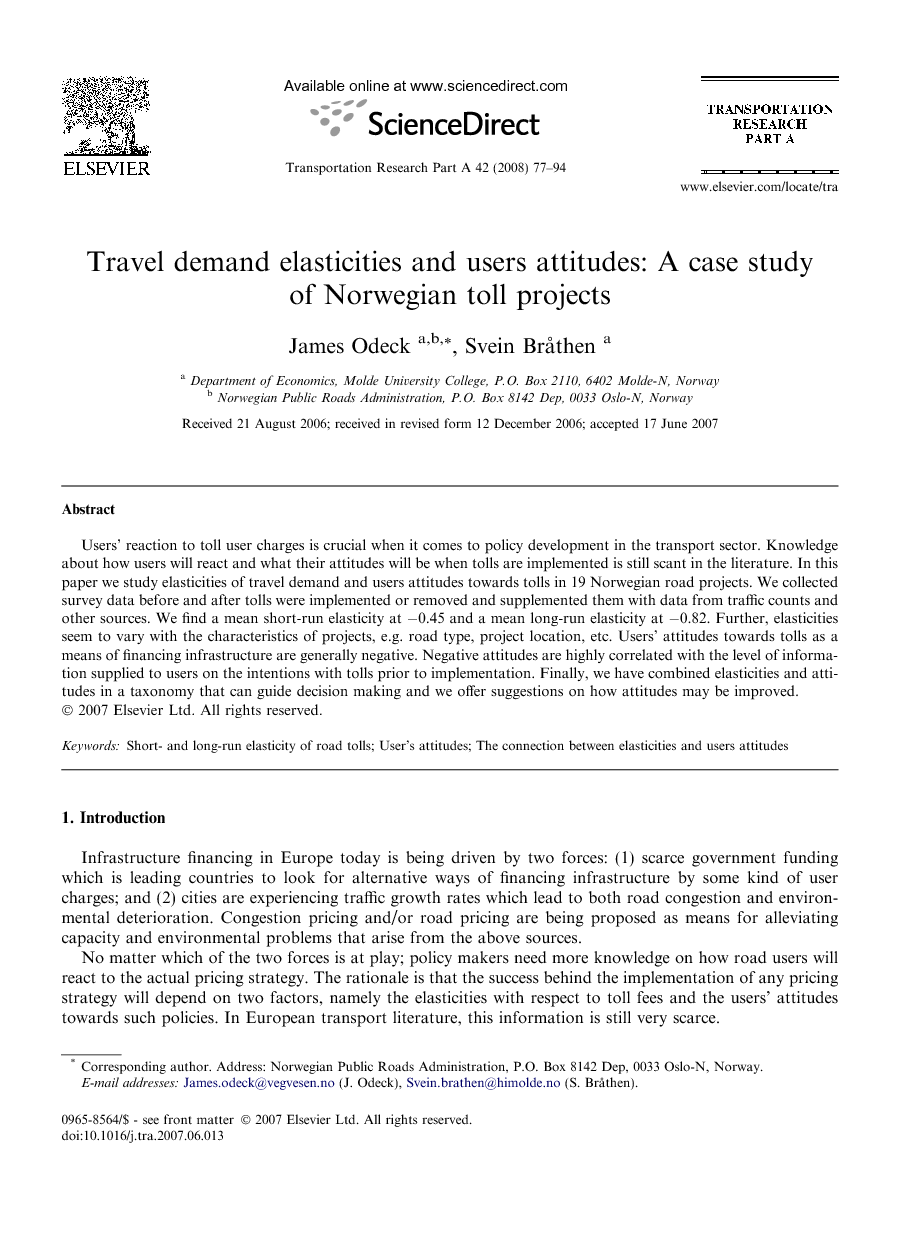 Users’ reaction to toll user charges is crucial when it comes to policy development in the transport sector. Knowledge about how users will react and what their attitudes will be when tolls are implemented is still scant in the literature. In this paper we study elasticities of travel demand and users attitudes towards tolls in 19 Norwegian road projects. We collected survey data before and after tolls were implemented or removed and supplemented them with data from traffic counts and other sources. We find a mean short-run elasticity at −0.45 and a mean long-run elasticity at −0.82. Further, elasticities seem to vary with the characteristics of projects, e.g. road type, project location, etc. Users’ attitudes towards tolls as a means of financing infrastructure are generally negative. Negative attitudes are highly correlated with the level of information supplied to users on the intentions with tolls prior to implementation. Finally, we have combined elasticities and attitudes in a taxonomy that can guide decision making and we offer suggestions on how attitudes may be improved.

Infrastructure financing in Europe today is being driven by two forces: (1) scarce government funding which is leading countries to look for alternative ways of financing infrastructure by some kind of user charges; and (2) cities are experiencing traffic growth rates which lead to both road congestion and environmental deterioration. Congestion pricing and/or road pricing are being proposed as means for alleviating capacity and environmental problems that arise from the above sources. No matter which of the two forces is at play; policy makers need more knowledge on how road users will react to the actual pricing strategy. The rationale is that the success behind the implementation of any pricing strategy will depend on two factors, namely the elasticities with respect to toll fees and the users’ attitudes towards such policies. In European transport literature, this information is still very scarce. Price elasticities of travel demand and user’s attitudes provide useful information on the responsiveness of travel behaviour to changes in transport policies that interferes with the travel costs. For example, in the case of tolls for the purpose of funding infrastructure, the more elastic travel demand, the greater the reduction in traffic will result from an increase or implementation of toll, and the less the gain in toll revenues. Conversely, the less elastic is travel demand, the less reduction in travel volume resulting from tolls, and the greater the gain in toll revenues. The importance of user’s attitudes pertains to political acceptability. Politicians as decision makers need indicators for gauging the popularity of policies. Empirical evidence on travel demand elasticity on tolled roads is limited due to the relatively low number of tolled roads in the world. Most of the studies that exist are project specific and can hardly be generalised. Besides, to our knowledge there have been no previous attempts to combine information on elasticities and attitudes to give policy advice. The objective of this paper is to provide new evidence on the magnitude of travel demand elasticities in tolled roads with particular reference to Norway where road tolling has a long tradition. Specifically, we measure short-run elasticities on 19 toll projects and go further to measure long-run elasticities on five of them. Further, we investigate users’ attitudes towards tolls. The results derived from this investigation are combined with the elasticities calculated to arrive at a taxonomy that can guide policy makers on when measures like road pricing or tolling are appropriate. A brief account of tolled roads in Norway is therefore in order. Tolls are collected for the purpose of building roads. For over 100 years, toll financing in the traditional sense has successfully been used in Norway as a supplement to government funding. The use of tolls as a financial instrument for road construction has increased considerably in the last two decades. Today, 32% of the total annual budget for road construction in Norway comes from more than 30 road projects scattered throughout the country. Collected funds from tolls are used to finance both urban and inter-urban road projects. In the three largest cities of Oslo, Bergen and Trondheim cordon tolls make up the main funding of road investments, and to a certain extent, public transport investment programs. In the non-urban areas, toll financing is used for road investments only. To date, about 100 toll projects have been realized successfully and only one has been declared bankrupt mainly because of an insufficient ex ante financial assessment. Most often, the initiative to collect tolls comes from the local community where the local politicians, business communities and the local road authorities foresee toll revenues as the only alternative for realizing a project within a more reasonable time span than would be the case with state funds alone. The overall guidelines for toll projects, issued by the central roads authorities, are that (i) the project must be viable in the socio-economic sense even with tolls, and the toll fees must be at a reasonable level implying that efficiency loss due to diverted traffic does not jeopardise the economic profitability of the project; (ii) the tolls are to finance road projects alone, although in special circumstances a portion may be used for financing public transport infrastructure; (iii) the tolls should be removed after 15–17 years in operation at which the investment must be down paid; and (iv) the toll company responsible for collecting tolls to finance the investment must be a non-profit company, i.e. tolls are for financing infrastructure alone. The decision-making procedure and the organisational framework for toll roads in Norwegian are summarised in Odeck and Bråthen (2002), where its deficiencies and potentials for improvement are also discussed. Today there are no clear-cut procedures for marketing tolls to roads users as a means of improving infrastructure. Thus, one reason to investigate users’ attitudes is to infer whether improved marketing may change their supposedly negative attitudes towards tolls. The remainder of this paper is organized as follows: Section 2 is the literature review of previous studies; Section 3 discusses the concept of elasticity; Section 4 describes the data used; Section 5 presents the empirical results and Section 6 concludes.

This paper has estimated both short- and long-run elasticities with respect to tolls in Norway. Further, it has investigated the users’ attitudes towards tolls and then combined attitudes and elasticities in a taxonomy that can help guide decision makers on when tolling or road pricing is most appropriate. Our point of departure has been that appropriate knowledge of the levels of elasticities, both short- and long-run, and their relationships to users’ attitudes is crucial for the design of user payment schemes in the road sector. Traffic demand is shown to be sensitive to tolls than households’ income. In the short-run, elasticities with respects to tolls average about −0.56 and in line with previous international studies. According to individual estimates, short-run elasticities ranged from −0.03 in most inelastic to −2.26 in the most elastic projects. This variation can be explained by variation in project characteristics such as toll levels and location of project. For the long-run elasticities, we find that these are higher than the short-run with a factor ranging from 1.05 to 1.6 illustrating that road user have variety of options over the period and therefore do not adjust immediately when tolls are introduced. Elasticity with respect to households’ income also shows that reactions are different between projects. The analysis of users’ attitudes has revealed that users generally do not fully acknowledge tolling as means of financing infrastructure. However, negative attitudes seem to decrease once users understand and perceive what the collected funds are used for. Hence, informing users of the benefits of tolls are a prerequisite for gaining support for tolling. Finally, we have considered the connection between elasticities and user attitudes to be able to pinpoint the properties of the transport system and the travel patterns that may cause certain undesirable combinations of elasticities and attitudes. One such situation is where the combination of negative attitudes and low demand elasticity is present. Even if the welfare loss from this combination may be modest in terms of traffic deterrence, there may be adverse distributive effects from a lack of alternative transport that should be considered. Another unfavourable situation is the combination of high elasticity and negative attitudes, where the welfare effects from low income, high car dependency and lack of alternative transport may cause adverse effects. More research remains to be done on this, but the taxonomy presented here may be used to address specific problems in the actual toll collection area.