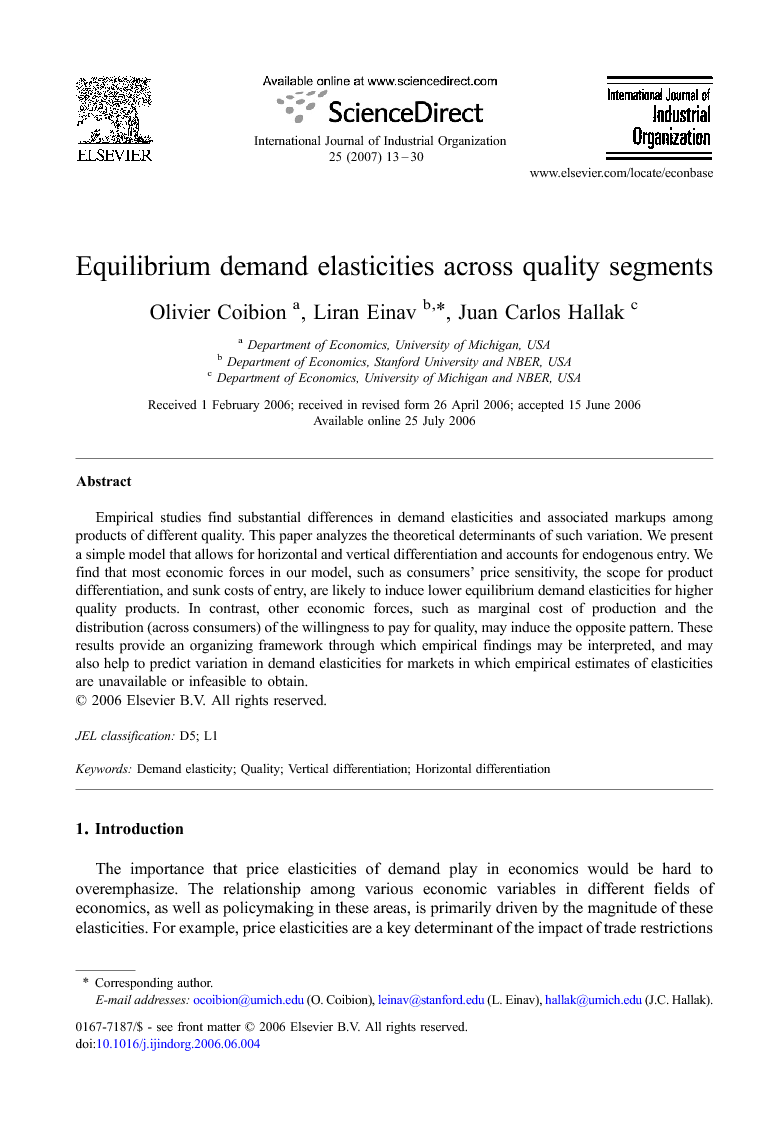 Empirical studies find substantial differences in demand elasticities and associated markups among products of different quality. This paper analyzes the theoretical determinants of such variation. We present a simple model that allows for horizontal and vertical differentiation and accounts for endogenous entry. We find that most economic forces in our model, such as consumers' price sensitivity, the scope for product differentiation, and sunk costs of entry, are likely to induce lower equilibrium demand elasticities for higher quality products. In contrast, other economic forces, such as marginal cost of production and the distribution (across consumers) of the willingness to pay for quality, may induce the opposite pattern. These results provide an organizing framework through which empirical findings may be interpreted, and may also help to predict variation in demand elasticities for markets in which empirical estimates of elasticities are unavailable or infeasible to obtain.

The paper presents a stylized model that allows for vertical and horizontal differentiation and accounts for endogenous entry. The results shed light on the determinants of equilibrium demand elasticities across quality segments of a market. We show that most economic forces would typically induce lower demand elasticities for higher quality products, a pattern that is consistent with the findings of most of the empirical literature on demand system estimation. This prediction may be reversed, however, if marginal costs of production of high quality products are significantly higher, or if the low quality segment of a market attracts only a small fraction of market participants. The model is highly stylized, as our main goal is to provide a simple framework encompassing several economic forces that simultaneously interact to determine equilibrium demand elasticities. The simplicity pays off in terms of the transparency of the results, which are obtained in closed-form. These results may provide an organizing framework to interpret empirical findings in the literature regarding the variation in estimated demand elasticities across quality levels. They may also be used to predict this variation based on limited information about product or market characteristics.