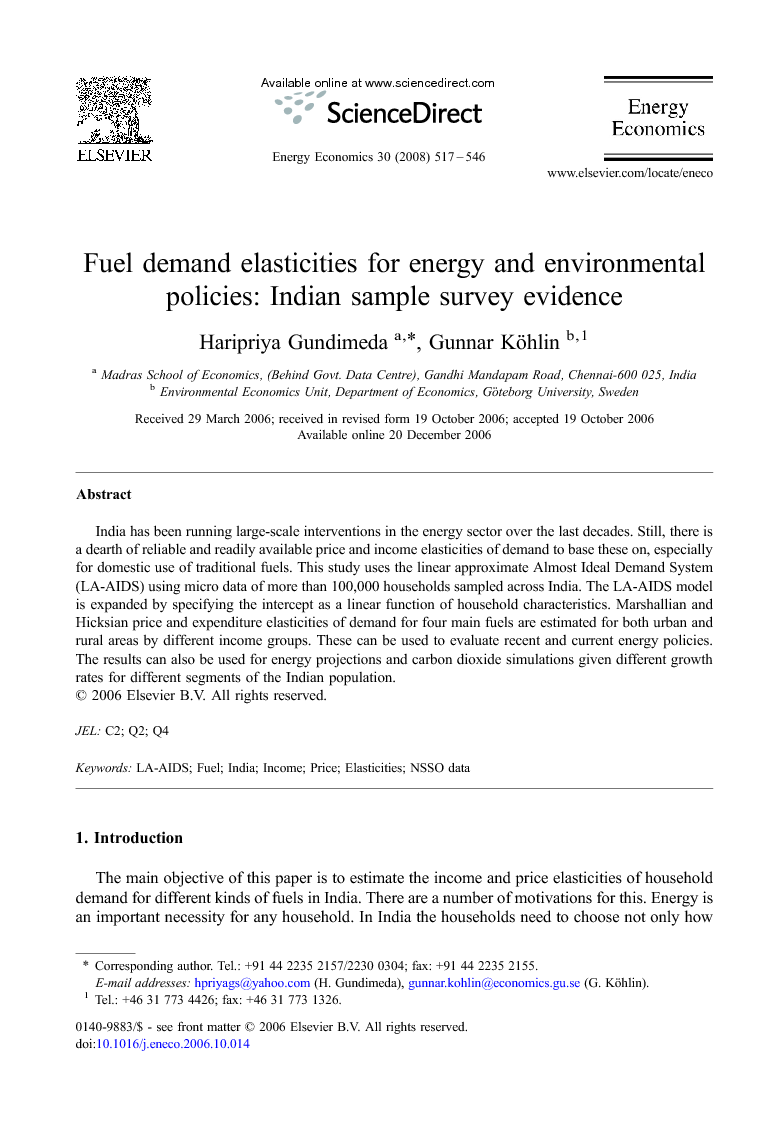 India has been running large-scale interventions in the energy sector over the last decades. Still, there is a dearth of reliable and readily available price and income elasticities of demand to base these on, especially for domestic use of traditional fuels. This study uses the linear approximate Almost Ideal Demand System (LA-AIDS) using micro data of more than 100,000 households sampled across India. The LA-AIDS model is expanded by specifying the intercept as a linear function of household characteristics. Marshallian and Hicksian price and expenditure elasticities of demand for four main fuels are estimated for both urban and rural areas by different income groups. These can be used to evaluate recent and current energy policies. The results can also be used for energy projections and carbon dioxide simulations given different growth rates for different segments of the Indian population.

Energy is a necessity. Given its importance for household welfare, public investments and environmental considerations it is surprising that not more formal analyses have been carried out for developing countries to analyse income, own-price and cross-price elasticities of demand for a full set of domestic energy sources, including fuelwood. The proliferation of national sample surveys might help to address this gap. In this paper we have shown that the Indian National Sample Survey Organization data, that include quantities and values of self-collected fuelwood, can be used for this purpose. We have also shown that further insights can be sought by disaggregating the data into relevant sub-samples, in this case in urban and rural samples, which were sub-divided into expenditure classes. The results from this exercise can be used in a number of ways, depending on the policy objective in mind. For a country like India, with a tradition of implicit and explicit government interventions that affect the prices of domestic fuels, the impact of such interventions on demand can be analysed based on own- and cross-price elasticities of demand. Similarly, if the desired policy objective is transition towards clean fuels (like LPG and electricity) due to the health impacts or local and global pollution, then these elasticities can prove useful in identifying the most cost-efficient policy. Another area of application is simulation for energy planning. As was indicated in the introduction, there has been a number of energy planning exercises in India over the last decades. Such exercises could be made more realistic and accurate if they were based on the kind of analysis provided in this paper. Domestic energy demand in India is not only of domestic interest today, given the population of India, this has become a global concern. For example, global greenhouse gas emission models would benefit from such estimates. The same holds for simulations of GHG emissions given implementation of a global carbon tax. The analysis has already given rise to a wealth of empirical information. The probit analysis highlighted the rural–urban differences in adoption of modern fuels and indicated that scheduled caste settlements in rural areas might be deprived of electricity with potentially alarming health implications as a result. We also identified significant regional differences in adoption. The estimation of the full LA-AIDS model gave further evidence of these differences and reminded us also of the significance that resources such as forests have in shaping domestic energy demand. Finally, the expenditure elasticities informed us that dependence on fuelwood will continue for a long time and that when we simulate future demand we will need to be careful in considering not only population and income growth, but also the distribution of this growth. There are still a number of improvements that could be made to this approach. Cross-sectional sample surveys are notoriously difficult to use in order to estimate price elasticities, primarily due to the lack of variation in price and the potential confounding with quality effects (Deaton, 1990). For future fuel related estimations, panel data analysis is probably worth attempting combined with more flexible functional forms. Sample surveys combined with collection of fuel prices would of course be ideal. The estimation would probably also be greatly improved if it were possible to combine the household expenditure data with exogenous information regarding accessibility of different sources of fuels. A geographical information system would be useful to structure the physical information for such analysis. Such rich data sets could also be used for much more disaggregated analysis than what has been made here.