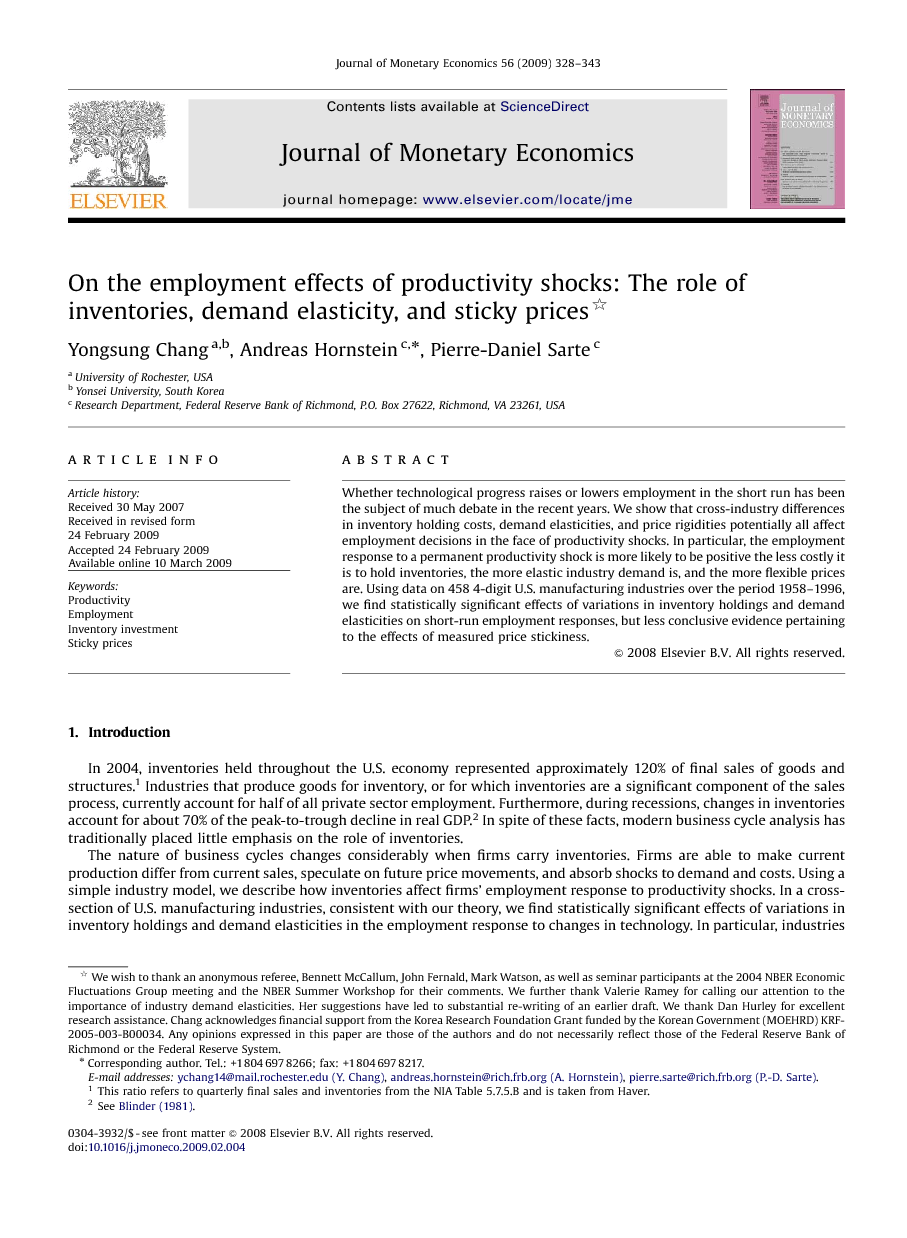 Whether technological progress raises or lowers employment in the short run has been the subject of much debate in the recent years. We show that cross-industry differences in inventory holding costs, demand elasticities, and price rigidities potentially all affect employment decisions in the face of productivity shocks. In particular, the employment response to a permanent productivity shock is more likely to be positive the less costly it is to hold inventories, the more elastic industry demand is, and the more flexible prices are. Using data on 458 4-digit U.S. manufacturing industries over the period 1958–1996, we find statistically significant effects of variations in inventory holdings and demand elasticities on short-run employment responses, but less conclusive evidence pertaining to the effects of measured price stickiness.

In 2004, inventories held throughout the U.S. economy represented approximately 120% of final sales of goods and structures.1 Industries that produce goods for inventory, or for which inventories are a significant component of the sales process, currently account for half of all private sector employment. Furthermore, during recessions, changes in inventories account for about 7070% of the peak-to-trough decline in real GDP.2 In spite of these facts, modern business cycle analysis has traditionally placed little emphasis on the role of inventories. The nature of business cycles changes considerably when firms carry inventories. Firms are able to make current production differ from current sales, speculate on future price movements, and absorb shocks to demand and costs. Using a simple industry model, we describe how inventories affect firms’ employment response to productivity shocks. In a cross-section of U.S. manufacturing industries, consistent with our theory, we find statistically significant effects of variations in inventory holdings and demand elasticities in the employment response to changes in technology. In particular, industries with larger inventory holdings and more elastic demand see a more pronounced increase in employment following a productivity improvement. Previous work on inventories using dynamic stochastic general equilibrium (DSGE) models has generally found a limited role for inventories in terms of their effects on the business cycle. By and large, however, most of this work was carried out in competitive environments with flexible prices.3 In contrast, our model focuses on a monopolistically competitive framework with sticky prices. Inventories, therefore, provide a means to improve upon distortions introduced by nominal rigidities. The inclusion of inventories significantly changes the economy's response to shocks. In particular, given nominal rigidities, employment increases in response to a technological improvement when firms hold inventories but declines otherwise. This suggests that whether or not inventories matter for the business cycle in DSGE models depends importantly on how inventories interact with specific features of the environment. A negative response of employment to an improvement in productivity is often interpreted as evidence in favor of sticky prices. Motivated by Galí (1999), a considerable body of work in contemporary macroeconomics has argued that aggregate employment falls in response to permanent increases in productivity and, moreover, that this fall persists over time. While this finding continues to be debated for aggregate data, Chang and Hong (2006) found substantial variation in the way that employment responds to productivity shocks in U.S. manufacturing industry data.4 When the analysis is shifted to industry data, the number of observations on the employment effects of changes in productivity increases significantly. Hence, one can more deeply explore how the heterogeneity in employment responses is affected by industry characteristics, such as inventory holdings or the degree of price stickiness. While sticky price models typically imply that employment falls in response to a positive technology shock—fixed prices imply unchanged real sales so that less labor is required to meet a given level of nominal demand—when firms hold inventories, they can choose to expand output relative to sales despite having sticky prices. They would do so both to exploit relatively low current production costs and to increase inventory stocks in anticipation of higher future sales. To study the role of inventories in a model that allows for price rigidities, we introduce inventories into a standard Taylor (1980)-type framework. Consistent with the inventory literature, firms value inventories because they reduce the cost of possible stock-outs while allowing production smoothing over time (Ramey and West, 1999; Bils and Kahn, 2000). The flexible price model is nested as the case with no price staggering. In addition, we explore the role of differences in demand elasticities across industries. Specifically, when industry demand is sufficiently inelastic, permanent technological improvements lead to decreases in employment even when prices are fully flexible. Ultimately, we clarify that both the sticky price and the flexible price framework are consistent with either decreases or increases in employment following a productivity improvement. Employment increases associated with such an improvement, however, always coincide with a build-up in inventories. Given our model's predictions, we estimate the employment responses to productivity shocks in U.S. manufacturing industries using structural vector autoregressions (VARs) in the spirit of Galí (1999). The VARs consist of total factor productivity (TFP), hours worked, and inventory holdings derived from the NBER Manufacturing Productivity Database, where productivity shocks are identified as the permanent component of TFP. The magnitude of an industry's short-run employment and inventory response to productivity shocks is then correlated with the industry measures of demand elasticity, inventory–sales ratios, and price stickiness. Price stickiness is measured using data on the average duration for which prices remain unchanged provided by Bils and Klenow (2004). As predicted by our theoretical model, a positive response of employment to technological improvements coincides with a build-up of inventories in many industries. Furthermore, both the employment and the inventory responses to a productivity shift are positively correlated with industry inventory holdings and demand elasticity in the cross-section. The evidence in support of price stickiness, however, is less conclusive. The Bils and Klenow dataset covers only one-fourth of the manufacturing industries included in the NBER database. In that smaller sample, the effects of price stickiness are not statistically significant. Our analysis of inventories and how they affect the employment response to productivity shocks builds on a suggestion by Bils (1998). Accounting for changes in industry employment, Bils found a positive and significant effect of the inventory–sales ratio interacted with changes in labor productivity. Besides providing an explicit theoretical justification for this argument, we connect the empirical work that emphasizes the use of disaggregated industry data (see Basu et al., 2006; Shea, 1999; Marchetti and Nucci, 2005; Chang and Hong, 2006) with the structural VAR identification of productivity shocks using aggregate data. This paper is organized as follows. Section 2 presents an industry model with staggered prices augmented to include inventory investment. In Section 3, the model is calibrated and the employment response to productivity shocks is examined across different degrees of goods storability, price stickiness, and demand elasticity. In Section 4, the model implications are studied using disaggregated data from the U.S. manufacturing industry. Section 5 concludes.