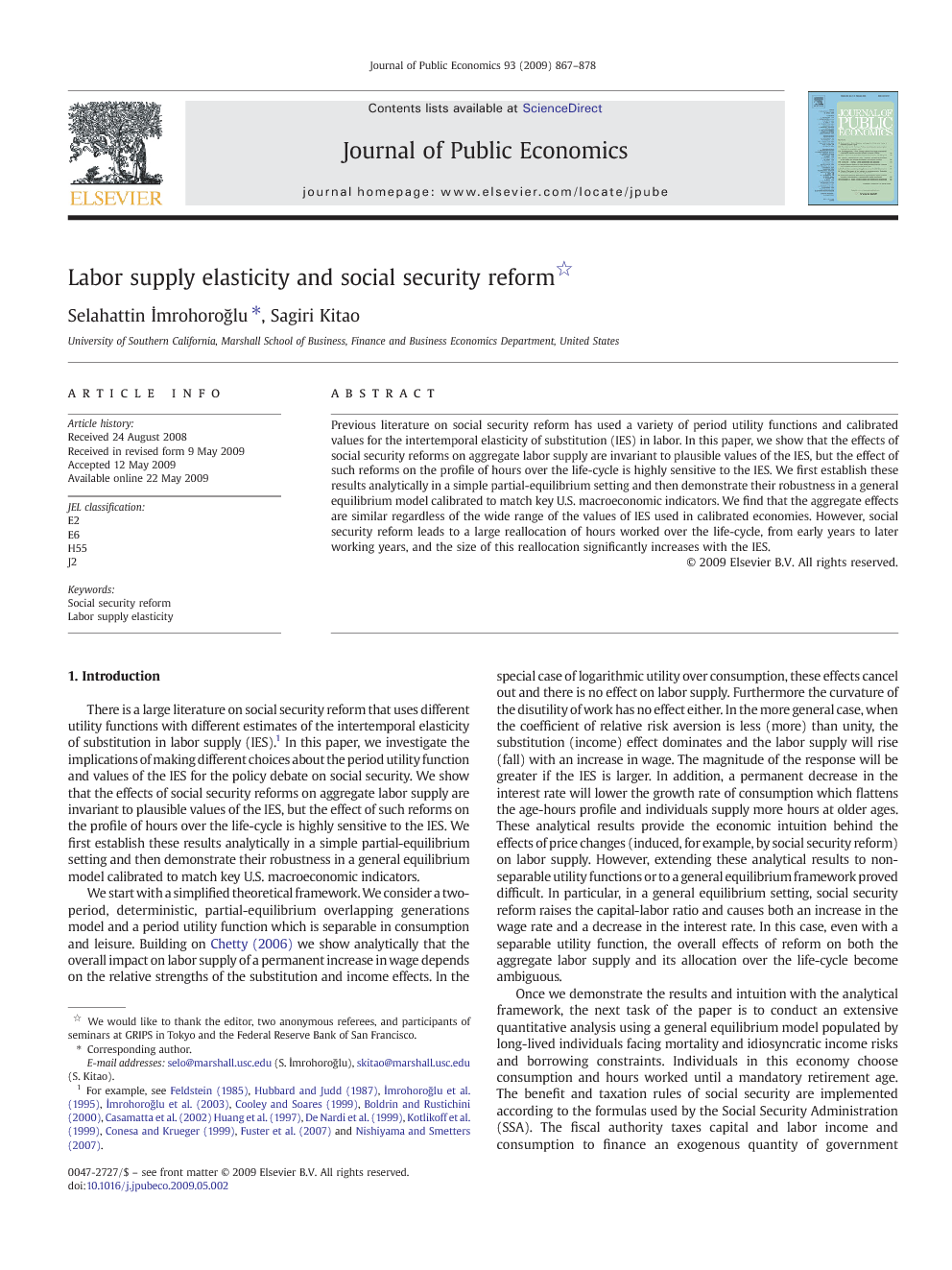 Previous literature on social security reform has used a variety of period utility functions and calibrated values for the intertemporal elasticity of substitution (IES) in labor. In this paper, we show that the effects of social security reforms on aggregate labor supply are invariant to plausible values of the IES, but the effect of such reforms on the profile of hours over the life-cycle is highly sensitive to the IES. We first establish these results analytically in a simple partial-equilibrium setting and then demonstrate their robustness in a general equilibrium model calibrated to match key U.S. macroeconomic indicators. We find that the aggregate effects are similar regardless of the wide range of the values of IES used in calibrated economies. However, social security reform leads to a large reallocation of hours worked over the life-cycle, from early years to later working years, and the size of this reallocation significantly increases with the IES.

There is a large literature on social security reform that uses different utility functions with different estimates of the intertemporal elasticity of substitution in labor supply (IES).1 In this paper, we investigate the implications of making different choices about the period utility function and values of the IES for the policy debate on social security. We show that the effects of social security reforms on aggregate labor supply are invariant to plausible values of the IES, but the effect of such reforms on the profile of hours over the life-cycle is highly sensitive to the IES. We first establish these results analytically in a simple partial-equilibrium setting and then demonstrate their robustness in a general equilibrium model calibrated to match key U.S. macroeconomic indicators. We start with a simplified theoretical framework. We consider a two-period, deterministic, partial-equilibrium overlapping generations model and a period utility function which is separable in consumption and leisure. Building on Chetty (2006) we show analytically that the overall impact on labor supply of a permanent increase in wage depends on the relative strengths of the substitution and income effects. In the special case of logarithmic utility over consumption, these effects cancel out and there is no effect on labor supply. Furthermore the curvature of the disutility of work has no effect either. In the more general case, when the coefficient of relative risk aversion is less (more) than unity, the substitution (income) effect dominates and the labor supply will rise (fall) with an increase in wage. The magnitude of the response will be greater if the IES is larger. In addition, a permanent decrease in the interest rate will lower the growth rate of consumption which flattens the age-hours profile and individuals supply more hours at older ages. These analytical results provide the economic intuition behind the effects of price changes (induced, for example, by social security reform) on labor supply. However, extending these analytical results to non-separable utility functions or to a general equilibrium framework proved difficult. In particular, in a general equilibrium setting, social security reform raises the capital-labor ratio and causes both an increase in the wage rate and a decrease in the interest rate. In this case, even with a separable utility function, the overall effects of reform on both the aggregate labor supply and its allocation over the life-cycle become ambiguous. Once we demonstrate the results and intuition with the analytical framework, the next task of the paper is to conduct an extensive quantitative analysis using a general equilibrium model populated by long-lived individuals facing mortality and idiosyncratic income risks and borrowing constraints. Individuals in this economy choose consumption and hours worked until a mandatory retirement age. The benefit and taxation rules of social security are implemented according to the formulas used by the Social Security Administration (SSA). The fiscal authority taxes capital and labor income and consumption to finance an exogenous quantity of government purchases and interest payments on its debt. We calibrate the model by using both micro data and aggregate data on the U.S. economy. We then conduct counterfactual (revenue-neutral) experiments by reforming social security, either by downsizing the system by 50%, or by totally eliminating it. Our goal is to understand the long-run effect of social security reforms and we focus on how the strength of IES affects the properties of the steady state under alternative policies. Our analysis is based on the comparison of the two steady states, one implied by the current pay-as-you-go social security system and the other by a reform towards a fully-funded system. Our main quantitative finding is that social security reform leads to similar aggregate outcomes for a wide range of the IES. For example, when we take the IES as 0.1, half privatization leads to an increase of 10.8% in the capital stock, an increase of 0.03% in the average work hours and a decrease of 5.8% in the budget-clearing labor income tax rate, whereas the changes are 9.8%, 0.11% and − 5.9%, respectively, when the IES is taken as 1.0, a ten-fold increase in the intertemporal responsiveness of labor. Long-run welfare is also similar: individuals strongly prefer to be born into the reformed steady state; they are willing to give up 5.0% and 5.4% consumption, respectively, in the unfunded steady state in order to be born in the reformed one. However, these similarities at the aggregate level hide significant differences in the allocation of work hours over the life-cycle. With reform (half privatization) individuals shift work from the early years in the life-cycle to later years, regardless of the IES. However, with an IES equal to unity, this reallocation is quantitatively much more significant than that in the case of an IES of 0.1. This reallocation is even larger in the case of full privatization. Therefore, the IES used in a study of social security reform leaves the aggregate implications unchanged to a large extent in the long run, but matters significantly when analyzing the life-cycle implications of the reform.2 We would like to emphasize that this paper explores the sensitivity of gains from social security reform to changes in the IES, but should not be interpreted as an exercise attempting to evaluate optimal social security reform. The overall welfare consequences of social security reform depend upon transitional costs and a variety of other parameters and factors beyond the IES. The remainder of the paper is organized as follows. We present a simple two-period model and its analytical results in Section 2. The large-scale, general equilibrium model is described in Section 3. The calibration details are given in Section 4. Section 5 presents our numerical findings. Section 6 conducts a sensitivity analysis and concluding remarks are given in Section 7.

The intertemporal elasticity of substitution in labor is a crucial parameter in determining the response of labor supply to changes in policy and factor prices. Early micro labor estimates by Altonji (1986) and MaCurdy (1981) suggest that labor supply is quite inelastic. More recent structural estimates utilized departures from the earlier representative agent models and also incorporated data other than prime-age males, producing estimates that are near unity. In the business cycle literature, early work by Kydland and Prescott (1982) relied on a high IES as the propagation mechanism of the business cycles in their neoclassical theory. Recent work by Prescott (2004) also argues for a high IES to explain the difference in average market hours between U.S. and European countries. In this paper, we explore the role of IES in shaping the quantitative results of social security reform. We start with a two-period, partial equilibrium, deterministic overlapping generations model. Our analytical results using a separable utility function extend previous research and show that the labor supply response to a price change depends on the sizes of substitution and income effects. For the special case of logarithmic utility on consumption there is no effect on labor supply when wage rises; a decrease in interest rate induces less work when young and more work when old. For more general utility functions, including non-separable preferences, and in a general equilibrium framework, analytical investigation is not feasible. Therefore, we consider a quantitative general equilibrium model populated with overlapping generations of individuals who face uninsurable income risk, mortality risk and borrowing constraints. Individuals choose hours worked until the mandatory retirement age, in addition to the usual consumption-saving decision over the life-cycle. We consider three classes of preferences that have been used in the applied labor, real business cycle, and public finance strands of the literature. For each period utility function, we evaluate the quantitative results of social security reform using a range of values for the IES commonly estimated and used in previous research. In each case, we calibrate the model to the same aggregate targets consistent with features of the U.S. economy over the past five decades. We have two main quantitative findings. First, a particular period utility function and the value for the IES have a negligible impact on the aggregate effects of social security reform. In all cases considered, reform results in an increase in the capital stock which is within a percentage point or two over the range of IES coefficients used. Aggregate labor supply is essentially unchanged in the long-run, consistent with the earlier findings of the overall canceling out of income and substitution effects in the long-run. However, reform generates a significant reallocation of hours worked over the life-cycle. This brings us to the second main finding of the paper. The increase in the capital–labor ratio fueled by social security reform lowers the real interest rate and flattens the life-cycle profile of labor supply. Individuals shift work hours from younger years to older years before they retire. This reallocation is quantitatively more significant with a higher IES. Therefore the value of IES used in analyzing social security reform has important implications on how individuals allocate hours over their life-cycle and the composition of labor supply of the economy. Finally, although our model has focused on the adjustment of labor supply at the intensive margin, we conjecture that the value of IES may also influence the participation and retirement decisions. Further investigating the effects on both intensive and extensive margins calls for a model that endogenizes participation decisions. We will investigate these important issues in an ongoing research.