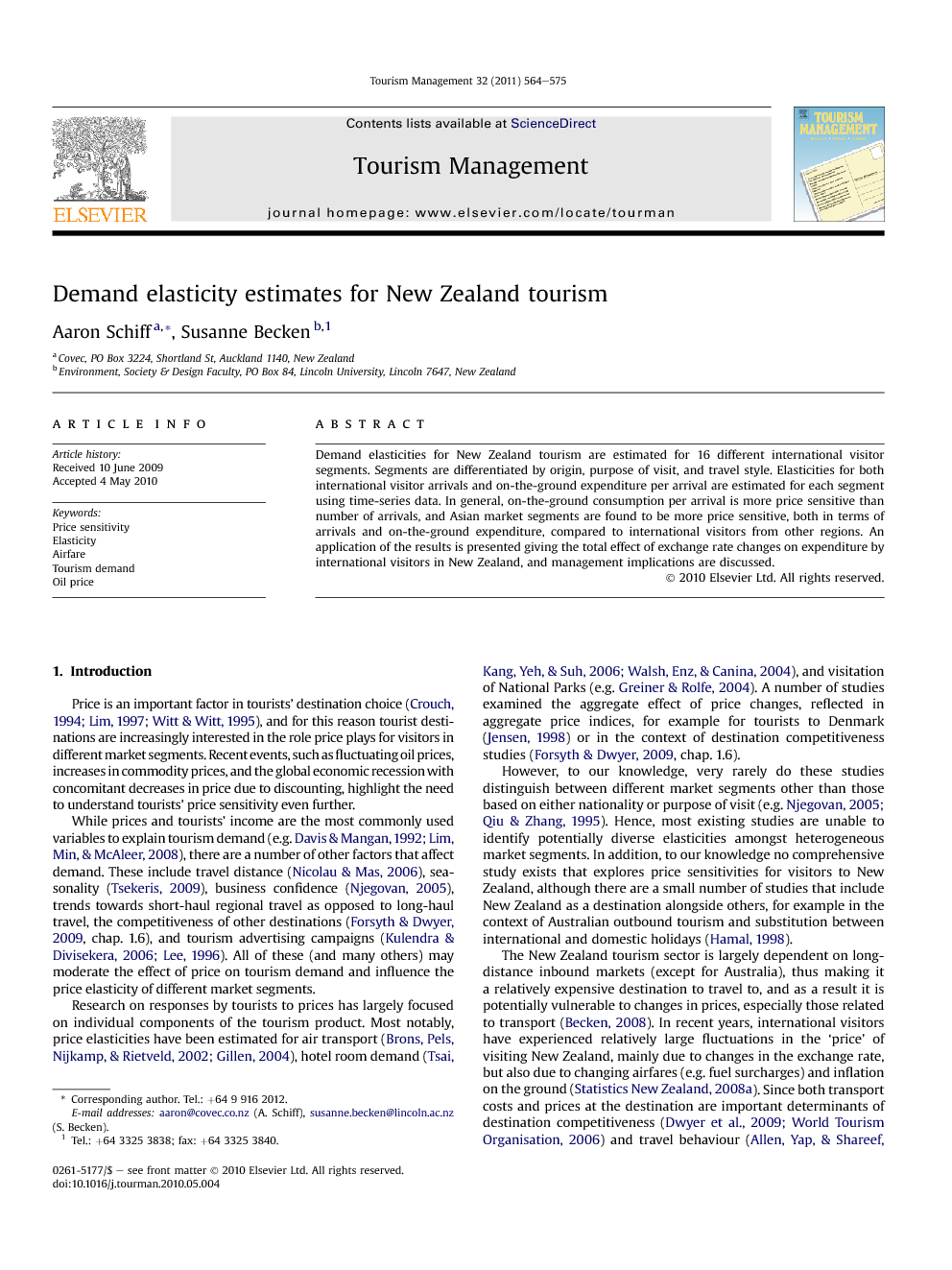 Price is an important factor in tourists’ destination choice (Crouch, 1994, Lim, 1997 and Witt and Witt, 1995), and for this reason tourist destinations are increasingly interested in the role price plays for visitors in different market segments. Recent events, such as fluctuating oil prices, increases in commodity prices, and the global economic recession with concomitant decreases in price due to discounting, highlight the need to understand tourists’ price sensitivity even further. While prices and tourists’ income are the most commonly used variables to explain tourism demand (e.g. Davis and Mangan, 1992 and Lim et al., 2008), there are a number of other factors that affect demand. These include travel distance (Nicolau & Mas, 2006), seasonality (Tsekeris, 2009), business confidence (Njegovan, 2005), trends towards short-haul regional travel as opposed to long-haul travel, the competitiveness of other destinations (Forsyth & Dwyer, 2009, chap. 1.6), and tourism advertising campaigns (Kulendra and Divisekera, 2006 and Lee, 1996). All of these (and many others) may moderate the effect of price on tourism demand and influence the price elasticity of different market segments. Research on responses by tourists to prices has largely focused on individual components of the tourism product. Most notably, price elasticities have been estimated for air transport (Brons et al., 2002 and Gillen, 2004), hotel room demand (Tsai et al., 2006 and Walsh et al., 2004), and visitation of National Parks (e.g. Greiner & Rolfe, 2004). A number of studies examined the aggregate effect of price changes, reflected in aggregate price indices, for example for tourists to Denmark (Jensen, 1998) or in the context of destination competitiveness studies (Forsyth & Dwyer, 2009, chap. 1.6). However, to our knowledge, very rarely do these studies distinguish between different market segments other than those based on either nationality or purpose of visit (e.g. Njegovan, 2005 and Qiu and Zhang, 1995). Hence, most existing studies are unable to identify potentially diverse elasticities amongst heterogeneous market segments. In addition, to our knowledge no comprehensive study exists that explores price sensitivities for visitors to New Zealand, although there are a small number of studies that include New Zealand as a destination alongside others, for example in the context of Australian outbound tourism and substitution between international and domestic holidays (Hamal, 1998). The New Zealand tourism sector is largely dependent on long-distance inbound markets (except for Australia), thus making it a relatively expensive destination to travel to, and as a result it is potentially vulnerable to changes in prices, especially those related to transport (Becken, 2008). In recent years, international visitors have experienced relatively large fluctuations in the ‘price’ of visiting New Zealand, mainly due to changes in the exchange rate, but also due to changing airfares (e.g. fuel surcharges) and inflation on the ground (Statistics New Zealand, 2008a). Since both transport costs and prices at the destination are important determinants of destination competitiveness (Dwyer et al., 2009 and World Tourism Organisation, 2006) and travel behaviour (Allen, Yap, & Shareef, 2009), stakeholders in the New Zealand tourism industry have an interest in understanding the price sensitivity of different market segments within the currently 2.5 million annual inbound tourists (Ministry of Tourism, 2008). More specifically, New Zealand tourism stakeholders are interested in i) the number of visitors arriving every year, and ii) how much tourists spend in New Zealand. The former interest is demonstrated by strategic partnerships (among other things), such as joint marketing initiatives between Tourism New Zealand and Air New Zealand. Here, marketing campaigns, such as Tourism New Zealand’s (2003) search for the “ideal visitor”, are coupled with the airline’s routing and pricing strategies. Tourist expenditure on the ground is also closely related to visitor characteristics (Becken & Simmons, 2008). While arrivals and expenditure are important variables, there are other aspects that could also usefully be modelled, such as changes in consumption patterns or length of stay (Alegre & Pou, 2006). In response to high oil prices in 2008 and other recent economic changes, the objective of this paper is to understand the price sensitivity of international visitors to New Zealand. Consultation with key tourism stakeholders revealed that a detailed market segmentation would be highly beneficial to better understand and develop management strategies. Accordingly, this paper estimates demand elasticities for 16 different visitor segments. Two different types of price elasticity are estimated for each segment: the elasticity of the number of international visitor arrivals, and the elasticity of consumption of New Zealand tourism goods and services per arrival. The remainder of this paper is organised as follows. Section 2 discusses the empirical models that were used and some econometric issues. Section 3 describes the data that was used in the estimation. Section 4 presents the basic elasticity results, and Section 5 gives an application of these results to estimate the effects of exchange rate changes.

This research analysed price elasticities for tourism demand to and in New Zealand for 16 market segments. Many of the traditional markets (e.g. UK, USA, Australia) appear to be not very price sensitive, which is reassuring for the New Zealand tourism industry and confirms the position of Tourism New Zealand that New Zealand is not a discount destination. Asian market segments are more price sensitive than other origins. However, all together, international visitors are unlikely to greatly change their travel behaviour within NZ due to higher prices, even for transport price increases (e.g. the international airfare). This research revealed that the effects of exchange rate fluctuations have been more substantial than changes in actual prices of tourism-related goods and services in New Zealand. Moreover, demand by international visitors to come to New Zealand is strongly influenced by economic conditions in their home country, which means that demand is likely to suffer in times of economic crisis. The New Zealand tourism industry is currently observing these impacts.