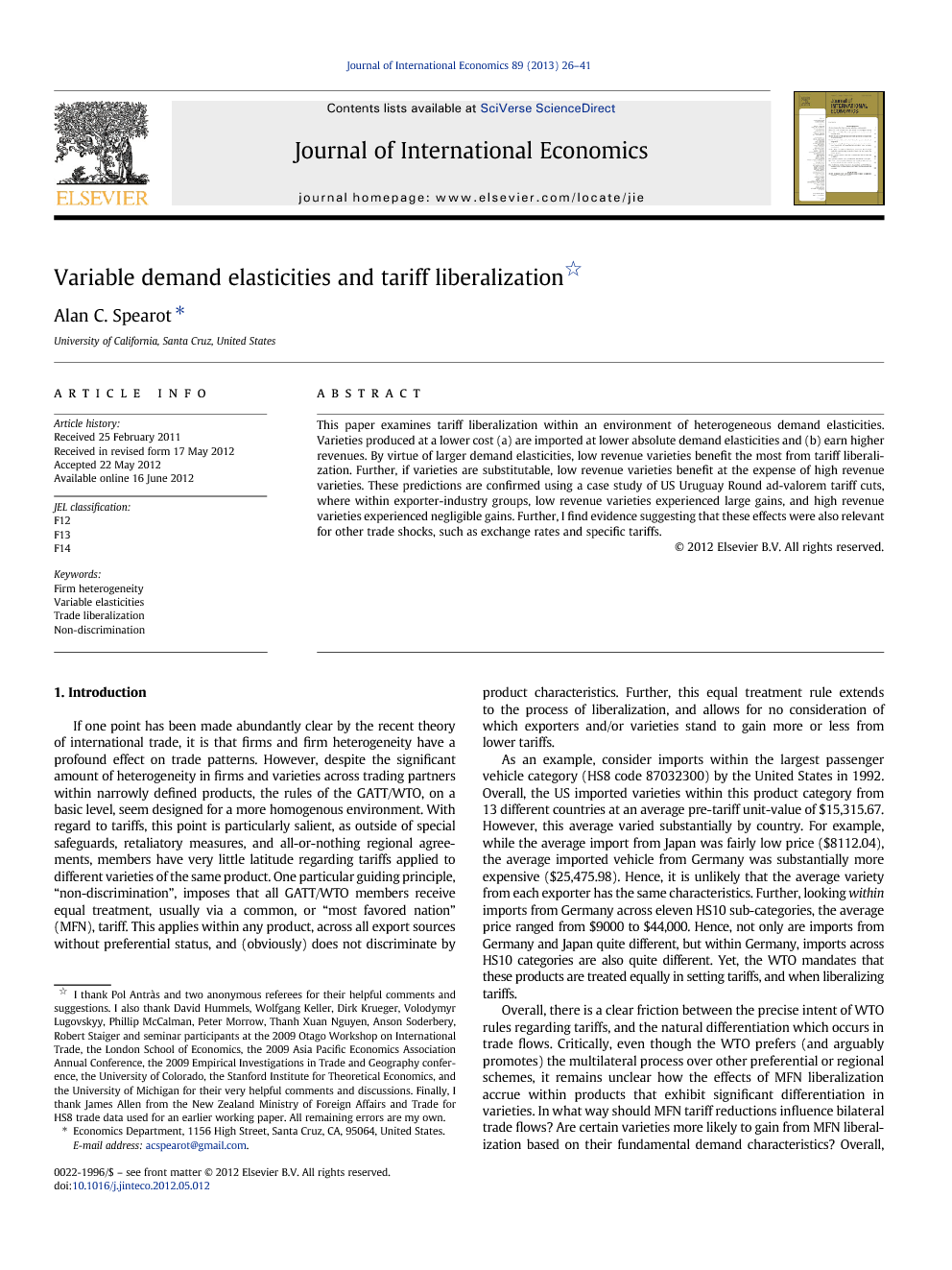 This paper presented a simple model of import market liberalization and bilateral trade. Theoretically, I show that when cost heterogeneity yields differences in demand elasticities, trade liberalization necessarily increases imports only of varieties that are of high cost, which are sold at relatively high demand elasticities and earn relatively low revenues. In evaluating the model using a case study of US tariff reductions resulting from the Uruguay Round, I find robust support for the model. The most promising extensions of this work are policy-related papers to evaluate how elasticity heterogeneity may induce a bias in projections over welfare calculations, and to evaluate whether the current rules of the WTO are sufficient to guarantee efficiency in trade negotiations conditional on the effects discussed in this paper. Regarding the former, preliminary calculations in the supplementary appendix suggest that when costs are distributed Pareto, applying an aggregate trade elasticity to all countries and firms will over-estimate the negative impact of tariffs on welfare. Intuitively, applying the aggregate elasticities to large suppliers ignores the fact that these suppliers are more likely to exhibit a muted response to tariff liberalization, and hence, the true negative impact of tariffs on consumer surplus is smaller. In the second extension, the empirics document natural economic forces that are in direct conflict with the intent of the central tenet of the WTO: the principle of non-discrimination. That is, while non-discrimination requires that countries apply and liberalize tariffs equally across MFN exporters, the benefits of tariff reductions do indeed discriminate along natural margins. The question then becomes, is non-discrimination a sensible policy?21 Or should countries be allowed to discriminate along some margin? As in Saggi (2004), countries left unconstrained will set higher tariffs on low-elasticity products, thereby exacerbating the disadvantage to high revenue suppliers under discrimination. Hence, it seems that non-discrimination, while not necessarily helpful to high revenue varieties, is likely preventing optimal discrimination that would otherwise make their situation worse. Indeed, successful exporters, who tend to lead WTO negotiations, may be more likely to support strict rules on bilateral agreement formation and other forms of discrimination that make it harder for countries to discriminate against their exporters. Evaluating this idea theoretically and empirically is left for future work.