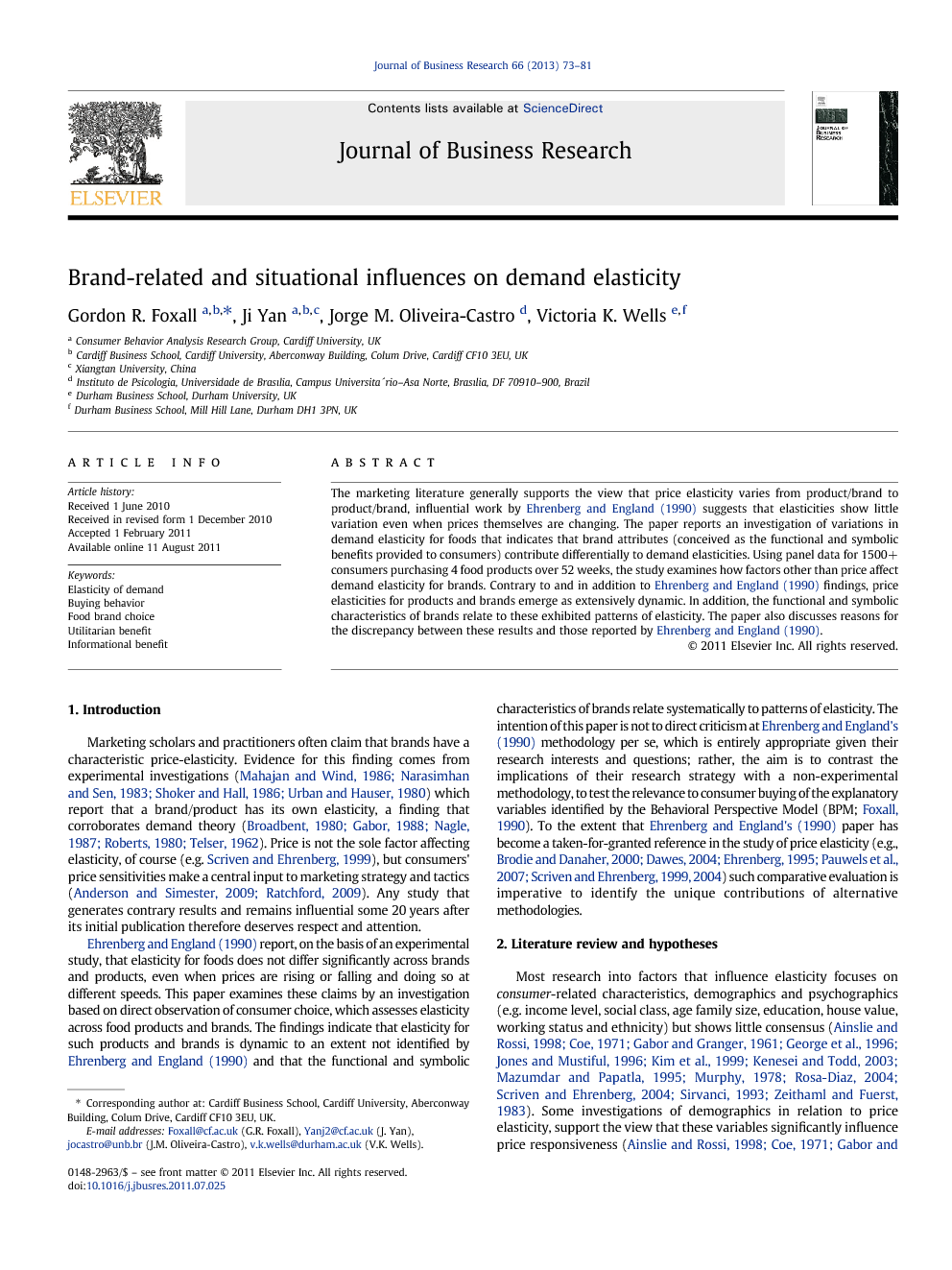 The marketing literature generally supports the view that price elasticity varies from product/brand to product/brand, influential work by Ehrenberg and England (1990) suggests that elasticities show little variation even when prices themselves are changing. The paper reports an investigation of variations in demand elasticity for foods that indicates that brand attributes (conceived as the functional and symbolic benefits provided to consumers) contribute differentially to demand elasticities. Using panel data for 1500+ consumers purchasing 4 food products over 52 weeks, the study examines how factors other than price affect demand elasticity for brands. Contrary to and in addition to Ehrenberg and England (1990) findings, price elasticities for products and brands emerge as extensively dynamic. In addition, the functional and symbolic characteristics of brands relate to these exhibited patterns of elasticity. The paper also discusses reasons for the discrepancy between these results and those reported by Ehrenberg and England (1990).

Marketing scholars and practitioners often claim that brands have a characteristic price-elasticity. Evidence for this finding comes from experimental investigations (Mahajan and Wind, 1986, Narasimhan and Sen, 1983, Shoker and Hall, 1986 and Urban and Hauser, 1980) which report that a brand/product has its own elasticity, a finding that corroborates demand theory (Broadbent, 1980, Gabor, 1988, Nagle, 1987, Roberts, 1980 and Telser, 1962). Price is not the sole factor affecting elasticity, of course (e.g. Scriven and Ehrenberg, 1999), but consumers' price sensitivities make a central input to marketing strategy and tactics (Anderson and Simester, 2009 and Ratchford, 2009). Any study that generates contrary results and remains influential some 20 years after its initial publication therefore deserves respect and attention. Ehrenberg and England (1990) report, on the basis of an experimental study, that elasticity for foods does not differ significantly across brands and products, even when prices are rising or falling and doing so at different speeds. This paper examines these claims by an investigation based on direct observation of consumer choice, which assesses elasticity across food products and brands. The findings indicate that elasticity for such products and brands is dynamic to an extent not identified by Ehrenberg and England (1990) and that the functional and symbolic characteristics of brands relate systematically to patterns of elasticity. The intention of this paper is not to direct criticism at Ehrenberg and England's (1990) methodology per se, which is entirely appropriate given their research interests and questions; rather, the aim is to contrast the implications of their research strategy with a non-experimental methodology, to test the relevance to consumer buying of the explanatory variables identified by the Behavioral Perspective Model (BPM; Foxall, 1990). To the extent that Ehrenberg and England's (1990) paper has become a taken-for-granted reference in the study of price elasticity (e.g., Brodie and Danaher, 2000, Dawes, 2004, Ehrenberg, 1995, Pauwels et al., 2007, Scriven and Ehrenberg, 1999 and Scriven and Ehrenberg, 2004) such comparative evaluation is imperative to identify the unique contributions of alternative methodologies.

The main contribution of this paper is with certainty the finding of results contrary to Ehrenberg and England (1990) which is in agreement with a range of marketing literature. However the aim of the paper was not to criticize the Ehrenberg and England work but to explore the role of price elasticity and question any identified discrepancy between results. The paper has explored, and calls for further work on, the study of open and closed settings which may explain the contrary results. However, this paper also, in response to the indeterminacy of consumer-related characteristics research suggested the use of brand-related characteristics and explored the impact of both utilitarian (or functional) benefits and informational (or symbolic) benefits. The overall finding that although price has the greatest role to play the determination of behavior by brand benefits shows a range of patterns across brands and products in their contribution to overall elasticity. While this paper argues that the strength of this approach derives substantially from the collection of data relating to consumer behavior in naturally occurring purchase settings, this paper recognizes that a limitation of this methodology is that some of the precision of experimental analyses is thereby lost. Such precision is especially important in the formulation of comparisons between open and closed settings, which are one of the chief explanatory variables. Although research involving panel data has enabled us to draw further conclusions relating to the influence of consumer behavior setting scope on brand elasticity (Yan et al., 2011), further experimental investigation would be welcomed which permits carefully defined open and closed settings to be more decisively contrasted.