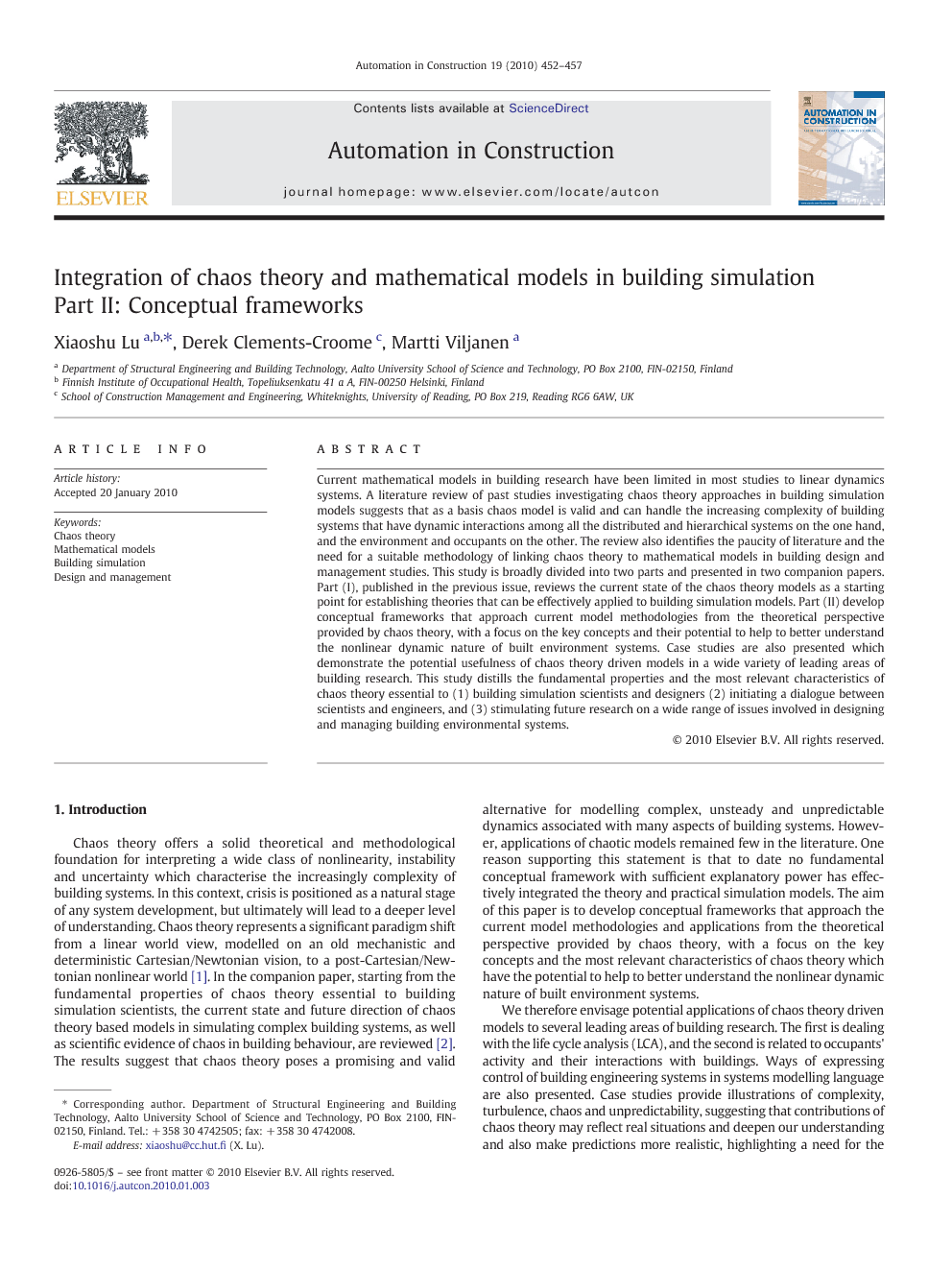 Current mathematical models in building research have been limited in most studies to linear dynamics systems. A literature review of past studies investigating chaos theory approaches in building simulation models suggests that as a basis chaos model is valid and can handle the increasing complexity of building systems that have dynamic interactions among all the distributed and hierarchical systems on the one hand, and the environment and occupants on the other. The review also identifies the paucity of literature and the need for a suitable methodology of linking chaos theory to mathematical models in building design and management studies. This study is broadly divided into two parts and presented in two companion papers. Part (I), published in the previous issue, reviews the current state of the chaos theory models as a starting point for establishing theories that can be effectively applied to building simulation models. Part (II) develop conceptual frameworks that approach current model methodologies from the theoretical perspective provided by chaos theory, with a focus on the key concepts and their potential to help to better understand the nonlinear dynamic nature of built environment systems. Case studies are also presented which demonstrate the potential usefulness of chaos theory driven models in a wide variety of leading areas of building research. This study distills the fundamental properties and the most relevant characteristics of chaos theory essential to (1) building simulation scientists and designers (2) initiating a dialogue between scientists and engineers, and (3) stimulating future research on a wide range of issues involved in designing and managing building environmental systems.

Chaos theory offers a solid theoretical and methodological foundation for interpreting a wide class of nonlinearity, instability and uncertainty which characterise the increasingly complexity of building systems. In this context, crisis is positioned as a natural stage of any system development, but ultimately will lead to a deeper level of understanding. Chaos theory represents a significant paradigm shift from a linear world view, modelled on an old mechanistic and deterministic Cartesian/Newtonian vision, to a post-Cartesian/Newtonian nonlinear world [1]. In the companion paper, starting from the fundamental properties of chaos theory essential to building simulation scientists, the current state and future direction of chaos theory based models in simulating complex building systems, as well as scientific evidence of chaos in building behaviour, are reviewed [2]. The results suggest that chaos theory poses a promising and valid alternative for modelling complex, unsteady and unpredictable dynamics associated with many aspects of building systems. However, applications of chaotic models remained few in the literature. One reason supporting this statement is that to date no fundamental conceptual framework with sufficient explanatory power has effectively integrated the theory and practical simulation models. The aim of this paper is to develop conceptual frameworks that approach the current model methodologies and applications from the theoretical perspective provided by chaos theory, with a focus on the key concepts and the most relevant characteristics of chaos theory which have the potential to help to better understand the nonlinear dynamic nature of built environment systems. We therefore envisage potential applications of chaos theory driven models to several leading areas of building research. The first is dealing with the life cycle analysis (LCA), and the second is related to occupants' activity and their interactions with buildings. Ways of expressing control of building engineering systems in systems modelling language are also presented. Case studies provide illustrations of complexity, turbulence, chaos and unpredictability, suggesting that contributions of chaos theory may reflect real situations and deepen our understanding and also make predictions more realistic, highlighting a need for the chaos theory to guide building research studies and stimulating future research on a wide range of issues of building environmental systems. Furthermore, being aware that most building simulation scientists still view chaos theory as an abstract concept which is foreign to them and so have not yet considered it as a practical tool and a useful model approach which is reflected in its few applications [2]. We also demonstrate the power of the proposed frameworks using hypothetical and illustrative time series data which exemplifies an occupant–environment response system where we present a set of diagnostic tests and identify chaos in the data. Results are displayed graphically. Visualisation techniques are now being developed which can spark imaginative thoughts and so help in understanding systems and their consequences. Hidalgo at Harvard is using network visualisation to study how the components of systems interact and give rise to emergent properties and behaviour [3]. He has patterned diseases and also developed a product space from which conclusions about economic aspects of viable product markets have been derived. Such techniques can serve to detect chaotic dynamics in a variety of systems. Taken together, chaos model based analysis and visualisation of complex systems may open potential practical ways of identifying, forecasting, controlling, and providing insight into complex behaviours in building systems, which would not be possible by other means of the traditional models. This paper is structured as follows. The next section gives a brief introduction to the proposed conceptual frameworks which aims to understand the use of chaos theory driven models in aforementioned application areas, namely cases studies of life cycle analysis, occupant–environment interaction, and building systems control. Mathematical applications of chaos theory in these case study applications are presented in parallel in 3, 3.1, 3.2, 4, 4.1, 4.2 and 5. Section 6 contains an illustration which exemplifies an occupant–environment response system using hypothetical time series data. Section 7 summarizes the main conclusions.

The objective of this paper is to develop conceptual frameworks that approach the current model methodologies and applications from the theoretical perspective provided by chaos theory. We focused on the key concepts and the most relevant characteristics of chaos theory which offer great potential to better understand the nonlinear dynamic changes in built environment systems. We detailed the frameworks for developing building simulation models deductively from chaos theory by using case studies to pinpoint the questions which arise in the design and management processes. Even though some features of these studies, such as problem definition, are case oriented, they display various chaos features. The case studies were selected from different leading topics in building research studies. Overall, these applications can be transferred to other research areas. We hope that the resultant models are novel, testable, and empirically valid but more data should be collected in the future to verity them. At this point, we also presented an occupant–environment response system that served as an illustration, based on hypothetical time series data, for applying the conceptual modelling frameworks introduced in the paper. We treated this occupant–environment response system as a feedback system that took into account an analysis of how much change could be expected from occupants in the decision-making procedure. Decision-making process has traditionally lacked a feedback mechanism. This example provides an illustration for building scientists to analyse systems behaviour and ultimately for designers to use criteria which truly link people and the building they inhabit. Chaos theory is attractive since simple models can offer real-world like phenomena which are fully determined by its internal dynamics. It is worth mentioning that the system is dependent on its interaction with its surroundings; this influence is precisely what nonlinear parameters try to describe. Nonlinear dynamical systems and chaos have a great potential not only from the research point of view, but also may suggest new applications. There is empirical evidence for these applications, as we have surveyed, even though this area of research is still relatively new. Finally, because this is a relatively novel approach, our understanding of where chaos can best be applied is still in its infancy. Even though the proposed applications as well as the illustrative example are weighted towards phenomena suggesting chaos, there is no intent here to make a case for the relative importance between chaotic and traditional models. We do not propose to replace current approaches to theory generation by one based on chaos theory, rather we suggest extending current theory by introducing a chaos layer.