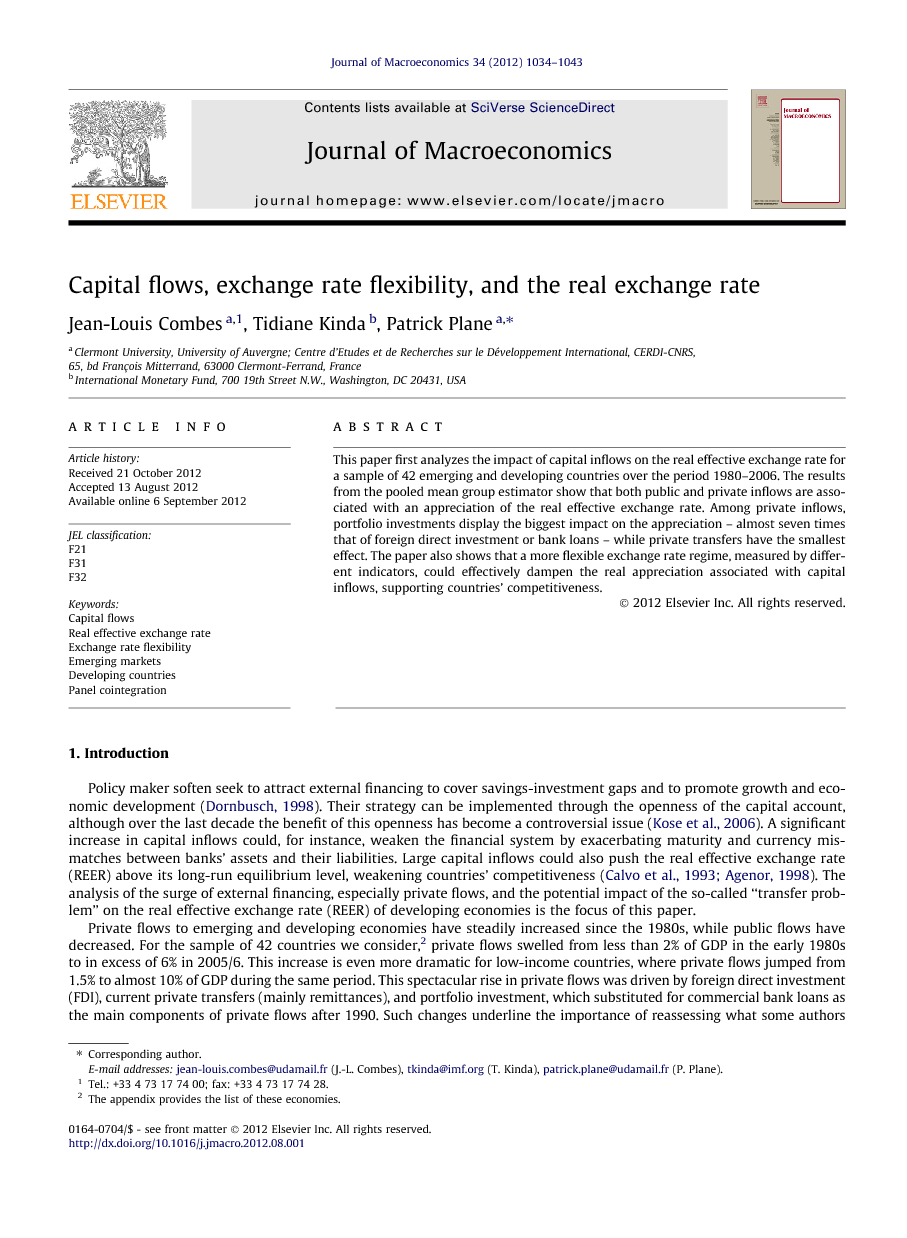 This paper first analyzes the impact of capital inflows on the real effective exchange rate for a sample of 42 emerging and developing countries over the period 1980–2006. The results from the pooled mean group estimator show that both public and private inflows are associated with an appreciation of the real effective exchange rate. Among private inflows, portfolio investments display the biggest impact on the appreciation – almost seven times that of foreign direct investment or bank loans – while private transfers have the smallest effect. The paper also shows that a more flexible exchange rate regime, measured by different indicators, could effectively dampen the real appreciation associated with capital inflows, supporting countries’ competitiveness.

Policy maker soften seek to attract external financing to cover savings-investment gaps and to promote growth and economic development (Dornbusch, 1998). Their strategy can be implemented through the openness of the capital account, although over the last decade the benefit of this openness has become a controversial issue (Kose et al., 2006). A significant increase in capital inflows could, for instance, weaken the financial system by exacerbating maturity and currency mismatches between banks’ assets and their liabilities. Large capital inflows could also push the real effective exchange rate (REER) above its long-run equilibrium level, weakening countries’ competitiveness (Calvo et al., 1993 and Agenor, 1998). The analysis of the surge of external financing, especially private flows, and the potential impact of the so-called “transfer problem” on the real effective exchange rate (REER) of developing economies is the focus of this paper. Private flows to emerging and developing economies have steadily increased since the 1980s, while public flows have decreased. For the sample of 42 countries we consider,2 private flows swelled from less than 2% of GDP in the early 1980s to in excess of 6% in 2005/6. This increase is even more dramatic for low-income countries, where private flows jumped from 1.5% to almost 10% of GDP during the same period. This spectacular rise in private flows was driven by foreign direct investment (FDI), current private transfers (mainly remittances), and portfolio investment, which substituted for commercial bank loans as the main components of private flows after 1990. Such changes underline the importance of reassessing what some authors refer to as the “transfer problem.” With most studies exploring the effect of aggregated capital inflows on the REER, this paper contributes to the literature by analyzing the reasons why different components of private flows (FDI, portfolio investment, bank loans, and private transfers) impact the REER differently. In addition, as various macroeconomic tools can be used to dampen the REER appreciation effect of capital inflows (IMF, 2007), we also explore how the flexibility of the exchange rate may modify this outcome. The analysis uses a sample of 42 countries over the period 1980–2006. The pooled mean group estimator is adopted, allowing short-run heterogeneity while imposing long-run homogeneity on the REER determination across countries. The results show that public and private capital inflows are positively correlated with an appreciation of the REER that may conflict with the competitiveness of the economy. Among private flows, portfolio investments have the biggest appreciation affect – almost seven times that of FDI or bank loans – while private transfers have the smallest effect. Furthermore, de facto measures of exchange rate flexibility suggest that a more flexible exchange rate could effectively dampen the real appreciation associated with capital inflows. The rest of this paper is organized as follows. Section 2 stresses potential heterogeneity on how different types of capital flows would affect the REER. This section also discusses the role played by the exchange rate regime. Section 3 presents the econometric model. Section 4 analyzes the results and provides some robustness checks. Section 5 concludes.