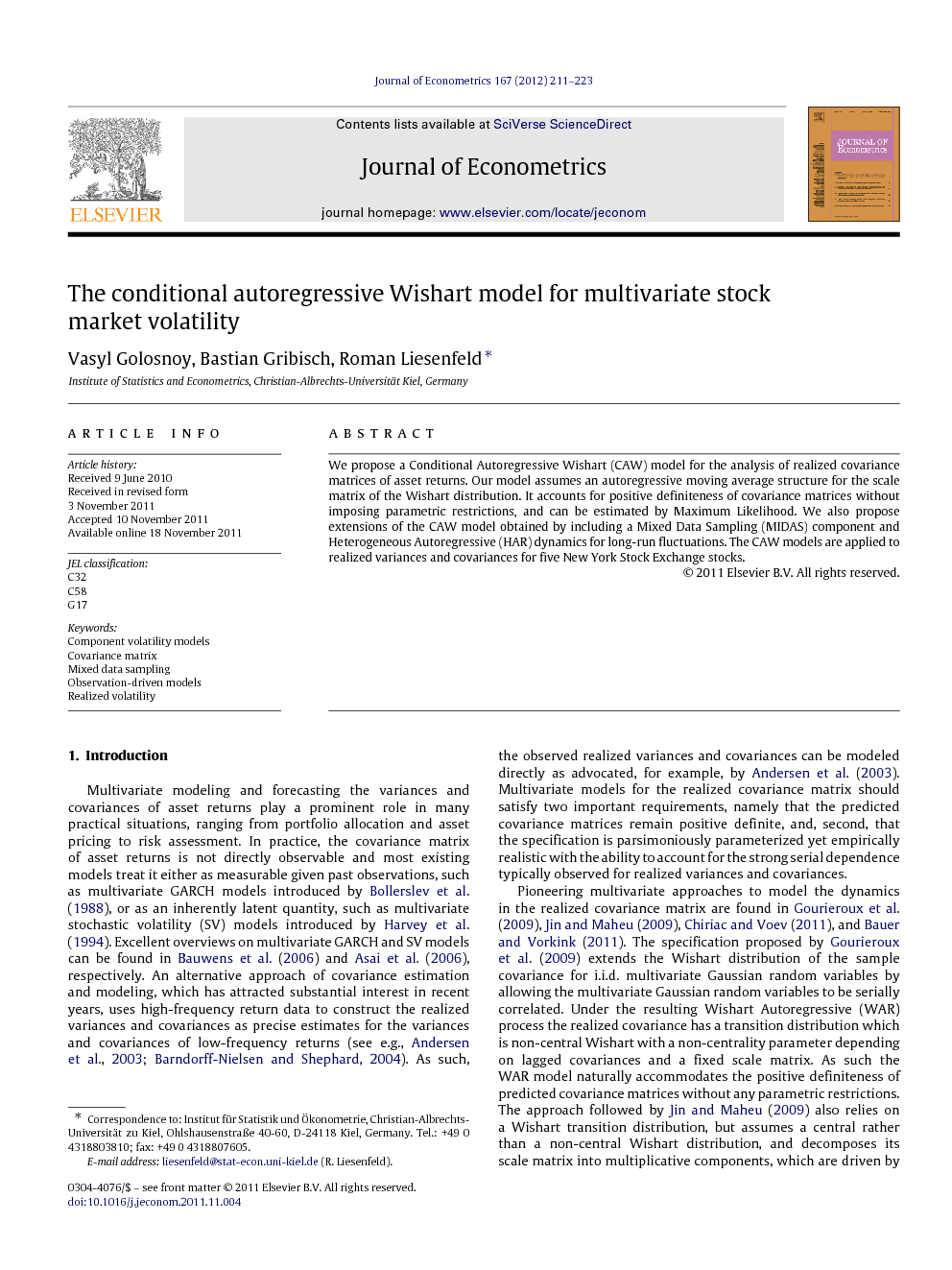 We propose a Conditional Autoregressive Wishart (CAW) model for the analysis of realized covariance matrices of asset returns. Our model assumes an autoregressive moving average structure for the scale matrix of the Wishart distribution. It accounts for positive definiteness of covariance matrices without imposing parametric restrictions, and can be estimated by Maximum Likelihood. We also propose extensions of the CAW model obtained by including a Mixed Data Sampling (MIDAS) component and Heterogeneous Autoregressive (HAR) dynamics for long-run fluctuations. The CAW models are applied to realized variances and covariances for five New York Stock Exchange stocks.

Multivariate modeling and forecasting the variances and covariances of asset returns play a prominent role in many practical situations, ranging from portfolio allocation and asset pricing to risk assessment. In practice, the covariance matrix of asset returns is not directly observable and most existing models treat it either as measurable given past observations, such as multivariate GARCH models introduced by Bollerslev et al. (1988), or as an inherently latent quantity, such as multivariate stochastic volatility (SV) models introduced by Harvey et al. (1994). Excellent overviews on multivariate GARCH and SV models can be found in Bauwens et al. (2006) and Asai et al. (2006), respectively. An alternative approach of covariance estimation and modeling, which has attracted substantial interest in recent years, uses high-frequency return data to construct the realized variances and covariances as precise estimates for the variances and covariances of low-frequency returns (see e.g., Andersen et al., 2003 and Barndorff-Nielsen and Shephard, 2004). As such, the observed realized variances and covariances can be modeled directly as advocated, for example, by Andersen et al. (2003). Multivariate models for the realized covariance matrix should satisfy two important requirements, namely that the predicted covariance matrices remain positive definite, and, second, that the specification is parsimoniously parameterized yet empirically realistic with the ability to account for the strong serial dependence typically observed for realized variances and covariances. Pioneering multivariate approaches to model the dynamics in the realized covariance matrix are found in Gourieroux et al. (2009), Jin and Maheu (2009), Chiriac and Voev (2011), and Bauer and Vorkink (2011). The specification proposed by Gourieroux et al. (2009) extends the Wishart distribution of the sample covariance for i.i.d. multivariate Gaussian random variables by allowing the multivariate Gaussian random variables to be serially correlated. Under the resulting Wishart Autoregressive (WAR) process the realized covariance has a transition distribution which is non-central Wishart with a non-centrality parameter depending on lagged covariances and a fixed scale matrix. As such the WAR model naturally accommodates the positive definiteness of predicted covariance matrices without any parametric restrictions. The approach followed by Jin and Maheu (2009) also relies on a Wishart transition distribution, but assumes a central rather than a non-central Wishart distribution, and decomposes its scale matrix into multiplicative components, which are driven by sample averages of lagged realized covariance matrices. In order to account for the positive definiteness, the approaches of Chiriac and Voev (2011) and Bauer and Vorkink (2011) use appropriate transformations of the covariance matrix. The former approach is based upon a Cholesky decomposition of the covariance matrix and assumes fractionally integrated processes for the individual elements of the Cholesky factor. The latter approach transforms the covariance matrix by using the matrix logarithm function and specifies the individual elements of the transformation as functions of latent factors driven by lagged volatilities and lagged returns. In the present paper, we adopt a novel conditional autoregressive Wishart (CAW) approach and propose a new flexible dynamic model for the realized covariance matrix of asset returns. Its baseline specification assumes a simple autoregressive moving average structure for the scale matrix of the Wishart distribution allowing to account for complex serial dependences in the variances and covariances. In particular, under our model the predicted covariance matrix depends on lagged covariance matrices as well as on their lagged predictions. As such it presents a dynamic generalization of the models proposed by Gourieroux et al. (2009) and Jin and Maheu (2009), where the predicted covariance matrix is specified as a function of lagged covariances only. Our model also accounts for symmetry and positive definiteness of the predicted covariance matrices without imposing parametric restrictions and can easily be estimated by Maximum Likelihood (ML). In addition, it allows us to derive in a straightforward manner conditions for stationarity and other important time series properties. A further advantage of our approach is that its baseline specification can easily be generalized. The extensions of the baseline CAW model we explore, are specifically designed to capture the long-run fluctuations in the variances and covariances. For this purpose, we combine the CAW specification with the mixed data sampling (MIDAS) approach of Ghysels et al., 2005 and Ghysels et al., 2006 and, alternatively, with a heterogeneous autoregressive (HAR) component as used by Corsi (2009) and Bonato et al. (2009). The rest of the paper is organized as follows. In Section 2 we introduce the baseline CAW model and discuss its stochastic properties. Extensions of the baseline model are proposed in Section 3. The empirical application to NYSE data is presented in Section 4. Section 5 concludes. The proofs are provided in the Appendix.