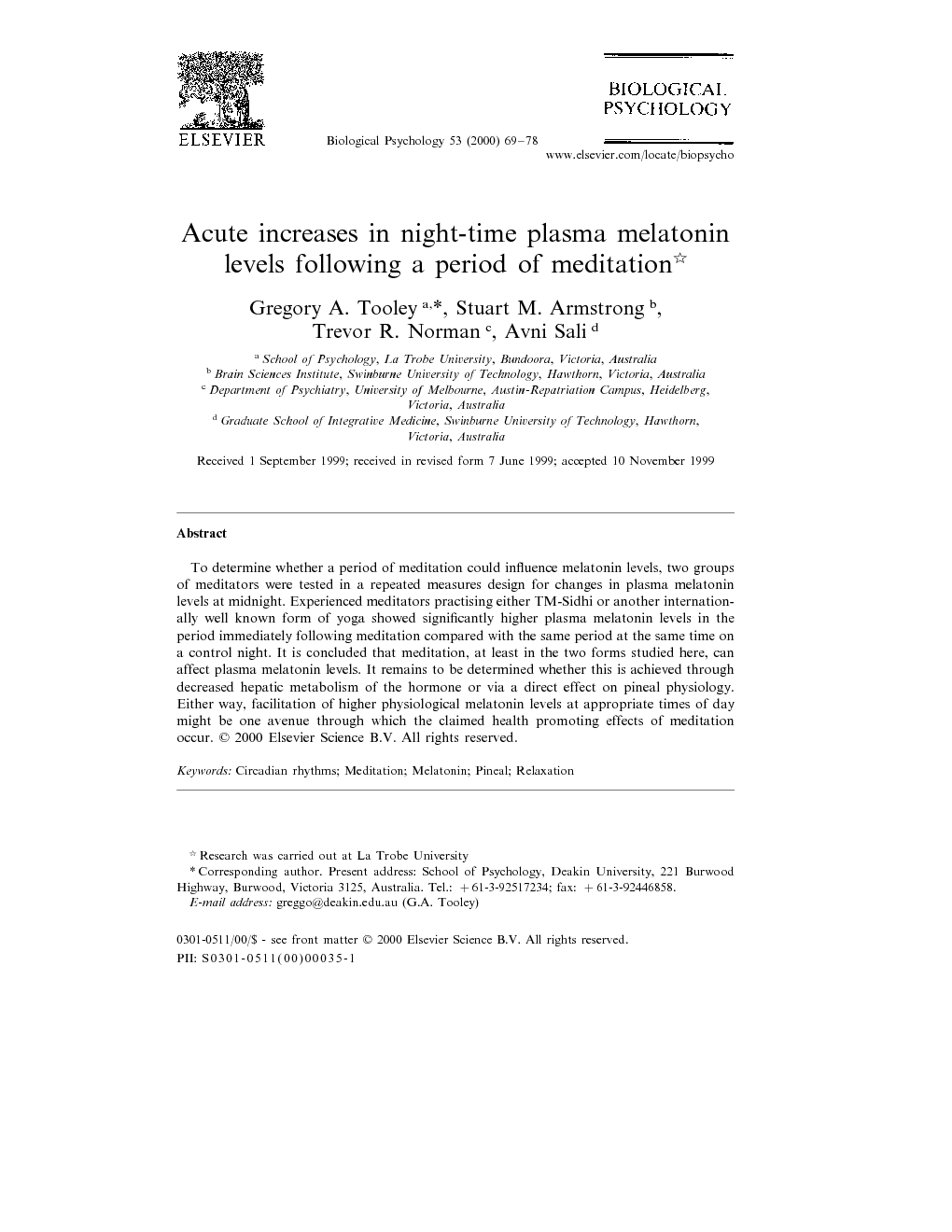 Meditation has been reported to have numerous acute effects on a diverse range of endocrine, metabolic and autonomic parameters (Jevning et al., 1992). Early scientific investigations of the transcendental meditation (TM) technique concluded that it produced a unique hypometabolic state (Wallace, 1970), but this claim was disputed in later studies which described TM merely as a biochemical resting state, perhaps no different to relaxation (Michaels et al., 1976). Since that time however, a number of studies have demonstrated clear differences between the physiological effects of TM and those of eyes-closed rest (Jevning et al., 1992), and there can now be little doubt that the technique can produce a physiological state which is qualitatively different to that resulting from simple rest. Although the uniqueness of the physiological effects of meditation has not been clearly demonstrated against other more active relaxation strategies, such as biofeedback or progressive muscle relaxation (Morse et al., 1977 and Shapiro, 1982), meditators consistently report greater subjective gains than have been reported for other relaxation methods (Shapiro, 1982). One may conclude from this that either there is a specific placebo effect for meditation, or that the physiological variables responsible for the meditative state have not been identified. Until recently (Massion et al., 1995), melatonin, the major hormone produced and secreted by the pineal gland had not been investigated as a variable in meditation research. However, a number of parallels between the reported effects of meditation and those of melatonin suggest a possible connection may exist between the two. The pineal is situated in the epithalamus at the center of the brain and receives sympathetic enervation from the superior cervical ganglia via the conarian nerves (Moore, 1978). In mammals, the pineal produces and releases melatonin (Lerner et al., 1958) only during darkness and it is not detectable during the day, irrespective of whether the species is nocturnal or diurnal in its behavioural activity (Klein, 1985). The pineal rhythm of nocturnal melatonin release is generated by the biological clock located in the suprachiasmatic nuclei of the anterior hypothalamus (Moore and Eichler, 1972 and Stephan and Zucker, 1972). In humans, melatonin release is robust and appears resistant to major change by sleep, general activity, a variety of stressors (Vaughan, 1986) except when severe (Monteleone et al., 1992), diet, alcohol or beverage ingestion (Norman et al.). While bright light can inhibit melatonin release (Lewy et al., 1980), and studies indicate that extended periods of rigorous night-time physical exercise can decrease or phase delay the onset of the melatonin rhythm (Van Reeth et al., 1994), no known natural substances or phenomena have been reported to reliably increase plasma melatonin levels, although some pharmacological compounds, e.g. monoamine-oxidase A inhibitors, are able to do so (Murphy et al., 1986). The stability of the melatonin rhythm makes it an ideal candidate for a biological timing hormone, a role which is indisputable for rhythms in seasonal breeding of photosensitive mammals (Arendt, 1986) and has been postulated also for daily rhythms (Armstrong, 1989). In addition to the biological rhythm functions of melatonin, other seemingly non-rhythmic roles have been advanced, including; anti-cancer (Gupta et al., 1988 and Panzer and Viljoen, 1997), immunoaugmentation (Maestroni et al., 1986), anti-aging (Maestroni et al., 1988 and Pierpaoli, 1998) and anti-stress (Pierpaoli and Maestroni, 1987). Although these properties have not yet been clearly established in humans, the fact that melatonin has been found to be an extremely potent antioxidant and free-radical scavenger (Reiter et al., 1997) suggests that it may have an important role in reducing the cellular damage associated with the wear and tear of normal day to day life. In this context, it is interesting to note that anti-cancer (Solberg et al., 1995 and Meares, 1979), immunoaugmenting (Wallace, 1989), anti-aging (Wallace et al., 1982) and anti-stress (Jevning et al., 1978a, Jevning et al., 1978b and MacLean et al., 1997) properties have also been claimed in relation to meditation. While the validity of the anti-cancer and anti aging claims in particular is debatable, the parallels with those made for melatonin are intriguing, and invite speculation that one of the mechanisms by which meditation might achieve some of its health benefits may be through an effect on circulating melatonin levels. With the above in mind, the following investigations were undertaken in order to test whether a period of meditation could acutely affect plasma melatonin levels.